Left-wing actor Sean Penn slimed the Tea Party as motivated by racism, charging on CNN’s Piers Morgan Tonight on Friday evening that an impediment to President Obama’s success is “what I call the ‘Get the N-word out of the White House party,’ the Tea Party.”

At a time when Herman Cain tops polls of Republican primary voters, Penn proceeded to allege, without citing any evidence, that “there’s a big bubble coming out of their heads saying, you know, ‘can we just lynch him?’” (video below)

For some reason, some liberals in Hollywood like to give dictators the benefit of the doubt. Their five-decade support for Fidel Castro’s iron rule over 11 million voiceless Cubans is inexplicable. Their “Blame America First” philosophy has brought them into relationships with some of the worlds most nefarious people – like Yasser Arafat and Saddam Hussein.

This shouldn’t surprise us, Hollywood is a fantasy factory – so it seems that the foreign policy experience of these folks reflects more their career than it does any true understanding of the reality of the governments they so enthusiastically defend. Recently, Hollywood liberals have found a new group of dictators to support. They now heedlessly defend the nouveau authoritarians of South America, like Hugo Chavez, Rafael Correa, and Evo Morales.

Oscar-winning actor Sean Penn is a well-known proponent of despots the world over.

On Sunday, he wrote another piece for the Huffington Post extolling the wonder that is Hugo Chavez while asking America to withdraw its recently imposed economic sanctions on Venezuela:

You might think that given the abysmal box office record of left-wing movies about the Iraq war that "Fair Game," a highly distorted version of the tired controversy surrounding former CIA non-agent Valerie Plame Wilson, would never have been made.

Of course, since Hollywood is dominated by leftists, economic sanity did not prevail. Economic reality did prevail, though, as "Fair Game" ended up being a total bomb. It grossed just $9.5 million domestically. Add in the international ticket sales and the fiction flick just barely managed to recoup its production budget of $22 million.

My source for those numbers of the St. Petersburg Times which still seems to believe the utter fiction that the Plame "disclosure" was the work of the nefarious Bush White House:

Appearing as a guest on CNN’s Parker-Spitzer, rocker Gene Simmons of the rock band KISS and the TV show Family Jewels related to viewers that he is "very conservative" on fiscal and foreign policy issues, voiced his support for President Bush and the war on terrorism - including "nation building" in Iraq - and declared that he wishes he could take back his vote for President Obama from the 2008 election.

As he later explained that he normally does not talk about politics because he believes entertainers are not qualified to speak about such matters, he also took a jab at Hollywood liberal Sean Penn and suggested that politically outspoken celebrities are "morons."

Simmons, who has a history of declaring his love for America because of the rescue of his mother from Nazi concentration camps, also discussed his visit to the house of Holocaust victim Anne Frank and its inclusion in his TV show Family Jewels.

When asked by co-host Kathleen Parker about his support for President Bush and the invasion of Iraq, Simmons revealed some of his voting history:

The editorial board of the Washington Post on Saturday ripped to shreds the factual authenticity of the new film about the Valerie Plame affair.

According to the Post, "'Fair Game,' based on books by [Joe] Wilson and his wife, is full of distortions - not to mention outright inventions" (h/t NBer Beresford):

The director of the new film "Fair Game" - released Friday - is either blatantly dishonest, or astoundingly lazy. The movie, starring Sean Penn as former U.S. diplomat Joe Wilson and Naomi Watts as his embattled wife, CIA agent Valerie Plame, makes a number of claims on controversial issues that are demonstrably false.

The Daily Caller's Jamie Weinstein did the legwork in demonstrating just how far from the truth some of the film's central claims are. Chief among them, perhaps unsurprisingly, is that Scooter Libby, Vice President Dick Cheney's chief of staff, and other White House officials exerted political pressure on intelligence officials to cherrypick intelligence favorable to claims that Iraq possessed weapons of mass destruction.

What is it with Hollywood personalities going to and being swept off their feet by the thuggish dictator Hugo Chávez. They come back with these stories claiming he is just misconstrued by the media and that he’s really a great guy.

On Oct. 7, at an appearance at the Cato Institute in Washington, D.C. promoting her book “You Know I'm Right: More Prosperity, Less Government,” the proudly libertarian co-host of CNBC's “Power Lunch” Michelle Caruso-Cabrera explained how this could happen. She told an audience that Chávez has a very charismatic, yet seductive personality.

“I was telling – my two most interesting interviews I think I’ve ever done are Milton Friedman, very influential on me, and also Hugo Chávez, because when I interviewed him I was struck by how much I like him,” she explained. “He’s very funny. He is so charming. He is smooth. He could be a stand-up comedian. He is a seductor, as I suspect most dictators are – that’s how they get to where they are.” 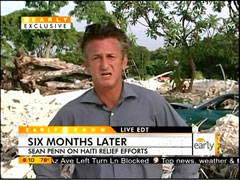 Appearing on Monday's CBS Early Show, actor Sean Penn described ongoing relief efforts in Haiti following January's earthquake and condemned the media for its lack of coverage of the disaster beyond the initial weeks: "I think that the media has played an enormous part in the failures that are still going on today and the recovery here and the relief operations."

Those comments from Penn were prompted by co-host Harry Smith wondering: "People would be curious why you went in the first place. And then, why you stayed. What's the best answer for that?" Penn replied: "...if they're wondering that, then that would be an indictment of the American and the international press that came here in the immediate aftermath of this devastating earthquake." Penn explained: "The United States sent its military, that did an extraordinary job in immediate relief....And then when they went on with other deployments, when the amputations en masse stopped, the media left."

Smith gave absolutely no reaction to Penn's scathing criticism, but simply went on to tout praise for the left-wing actor's work on the island nation: "I was reading the comments of a lieutenant general from the U.S. Southern Command who you came in contact with. And he said, 'you know, maybe I don't agree with Sean Penn's politics but I can tell you this, he's a doer, not a talker....I applaud the leadership he has shown. He doesn't have to do this.'"

The Sean Penn-Naomi Watts “starrer” (hey, it’s fun using unnecessarily awkward Variety-speak!) revisits the Valerie Plame Wilson scandal, an episode I’m not even going to bother recapping, because to do so would simply be coma-inducing for all of us. Besides, I already summed up the affair and dissected the screenplay’s political slant for Big Hollywood here. Suffice it to say, it’s a tale the Hollywood Left is hell-bent on getting Americans to care about.

As are its water-carriers in the media. In a deceptive puff piece an article last week for the Los Angeles Times, Rachel Abramowitz discusses the film and interviews its director Doug Liman. The first clue that we’re about to be sold a crockpot of hooey comes when she describes Valerie Plame as “the undercover CIA operative whose name was leaked to the media by the Bush White House in an effort to discredit her husband, former Ambassador Joe Wilson.”

Olbermann: My Ancestors Came to U.S. 'Trying to Get Away from People Like' Marco Rubio 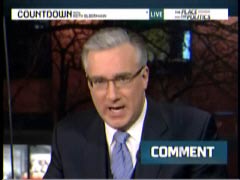 On Wednesday's Countdown show, MSNBC host Keith Olbermann used his regular "Quick Comment" segment to lecture Florida Republican Senate candidate Marco Rubio for recently remarking that people like Olbermann "hate America" and should be traded to other countries in exchange for immigrants who love America. As the MSNBC host referred to his own great grandparents who immigrated to America "for its opportunity and its freedom," Olbermann charged that they had come to this country to escape people like Rubio: "Mr. Rubio, I am the great grandson of immigrants, as you are the son of immigrants, who came to this country for its opportunity and its freedom. And I know one thing for sure: my ancestors and yours were trying to get away from people like you."

Notably, just over a year ago on the March 24, 2009, Countdown show, Olbermann seemed to express a negative view of American "values" generally when he mocked the name of Gary Bauer's American Values organization as sounding like a "discount septic tank operation." Olbermann: "Gary Bauer, former presidential candidate, former Reagan domestic policy adviser and now president of American Values which, despite the name, is not a discount septic tank operation, writing at Politico a mere two months after the last of dozens of conflicting Pentagon reports suggested with almost no verification that 61 former Gitmo detainees had been identified as returning to terrorism."

An Open Letter to Sean Penn

Editor's Note: The following is an open letter from actress Maria Conchita Alonso, who penned this response to actor Sean Penn's recent remarks on HBO's "Real Time with Bill Maher" in which the left-wing actor defended Venezuelan dictator Hugo Chavez.

Even though I have great respect for your artistic talent, I was appalled by a recent television interview where you vigorously showed support for the regime of Hugo Chavez. Therefore, I've decided to set the record straight for you regarding the Chavez regime, supporting my case based not only on my political ideologies, but on proven facts you choose to ignore.  Otherwise, I believe your position would be different.

Being born in Cuba, a country where freedom of speech is non-existent, it's startling to observe how Venezuela, where I was happily raised, is fast becoming Cuba's mirror image: Dismantling of fundamental democratic rights deserved by its people and citizens of the world.

For example, you said that all Chavez-winning elections in Venezuela were "transparent."

Then WHY didn't the government allow a manual recount of the votes and computer information when doubt set in? After all, how do you explain how these votes that were strongly favoring the opposition mysteriously reflected the opposite results the morning after, thus permitting Chavez to continue on?  On what are you basing your conclusions? I strongly recommend that you read a report by the U.S. State Department written in 2009 entitled "The Fraudulent Elections in Venezuela".