CBS and ABC journalists on Tuesday and Wednesday fawned over the “primal” scream actress Meryl Streep gave at the Democratic National Convention last month. Appearing on CBS This Morning, Wednesday, the movie star explained her pro-Hillary Clinton speech, saying, “I felt it was a moment in history and I felt like I was surfing this huge wave of wonderfulness.”

Actress and Hillary Clinton supporter Meryl Streep had a few choice things to say about Clint Eastwood’s recent interview with Esquire magazine, where he said if he had to choose between Clinton and Trump, it’s obvious he would choose Trump: “That’s a tough one, isn’t it? I’d have to go for Trump … you know, ’cause she’s declared that she’s gonna follow in Obama’s footsteps.”

Hollywood and global-warming panic have always been a natural match. After all, who can tell you better to cut back on your wasteful ways better than a high-flying multi-millionaire movie star with the carbon footprint of a Tyrannosaurus Rex?

It's never mattered that the stars have all the scientific expertise of Pee Wee Herman. They're just so good-looking and famous, who cares? PBS broadcast a ten-hour series in 1990 entitled Race to Save the Planet. The show's host was Meryl Streep, who proclaimed: "By the year 2000...the Earth's climate will be warmer than it's been in over 100,000 years. If we don't do something, there will be enormous calamities in a very short time." Oops.

Column: Lois Lowry's 'The Giver' a Portent of What Might Be?

With his approval numbers sinking to 39 percent a week ago, according to the Gallup tracking poll, President Obama isn't alone in having a bad summer. So is.

calls gross receipts for what should have been a blockbuster  weekend "downright terrifying." Writes EW, "Not only were grosses down 45 percent from last year's holiday, according to Boxofficemojo.com, but it was  worst weekend since 1999. (And that's not taking into account inflation. In fact, this was the worst July-holiday weekend for ticket sales since the summer of Dragnet in 1987.)"

The folks at CBS’s Late Show decided to give viewers a Christmas treat Thursday by playing a clip of the new film “August: Osage County” starring Meryl Streep and Julia Roberts.

Times theatre critic Charles Isherwood gave the rave for Streep, "practically a religious icon herself — or an aesthetic one, anyway. She’s virtually been sanctified as the Greatest Film Actress of her generation...Doesn’t it seem inevitable that Meryl Streep would one day play the mother of Christ?" Except Toibin's Mary denies that Jesus is the Christ. That's the part the anti-Christian newspapers really enjoy.

In the era of "warmonger" Republicans in the White House, the Toronto International Film Festival would have been fertile ground for bold, outspoken "dissent" from actors against war in the Middle East. Now with Obama on the brink of missile attacks in Syria, you would expect the same agitation, but this time coupled with a dash of betrayal.

Instead, the Hollywood Reporter found nothing there but an icy pile of "no comments" from more than a dozen celebs, including Susan Sarandon, Josh Brolin, Penn Jillette and Tim Robbins.

After praising Meryl Streep for her recent performance as Margaret Thatcher, MSNBC's Martin Bashir Tuesday bashed Mitt Romney and Newt Gingrich claiming the Oscar-winning actress "would probably make a more authentic president' than either of them (video follows with transcript and commentary): 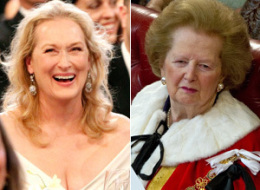 Margaret Thatcher's family is apparently appalled at what they've been hearing about a biopic being made of the former British Prime Minister.

"Mandrake hears that the screenplay of The Iron Lady depicts Baroness Thatcher as an elderly dementia-sufferer looking back on her career with sadness," reported Britain's Telegraph Saturday.

"She is shown talking to herself and unaware that her husband, Sir Denis Thatcher, has died." 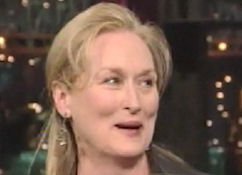 “Hollywood actress Meryl Streep has admitted that the only person she has been star-struck by is U.S. President Barack Obama,” an India Times item posted on Sunday reported, quoting the actress: “I went to the White House and was star-struck by our President and First Lady. Although I was also impressed by Bruce Springsteen who was there as well.” 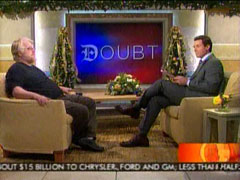 Actress Meryl Streep, who plays an authoritarian nun battling a "passionate liberal priest" (according to Newsweek) in the new film "Doubt," told the Boston Herald on Sunday that the film is actually a metaphor for those who think the war on terror can be won with force. She argued, "It's about someone who thinks you can control evildoers with force and a firm hand and an unrelenting, 'We will not negotiate (with terrorists).'"

The liberal actress also added, "Or there's another approach, one with all these layers of humanity who think you have to have innocence so it doesn't go bad and get corrupted." Philip Seymour Hoffman, who co-stars in the film as a priest suspected of sex abuse, appeared on Monday's "Good Morning America" as part of a three day promotion that the ABC network is providing for the film. In the interview with news anchor Chris Cuomo, Hoffman somewhat cryptically said of the film, "...Certainty is usually connected to something positive. And doubt is usually connected to something negative. And what if you switch that and what would happen? And the film kind of is looking at those issues." (Reviews of the film suggest it comes down on the side of doubting.)

You would think this the perfect formula for a blockbuster movie: megastars Tom Cruise, Robert Redford, and Meryl Streep teaming up to flood theaters with an antiwar film just in time for the holidays.

Well, think again, for it appears that this much-anticipated film, featuring the much-anticipated return of Tom Cruise to the big screen, is a bigger bomb than anything the enemy has been able to lob at us in Iraq since the surge began.