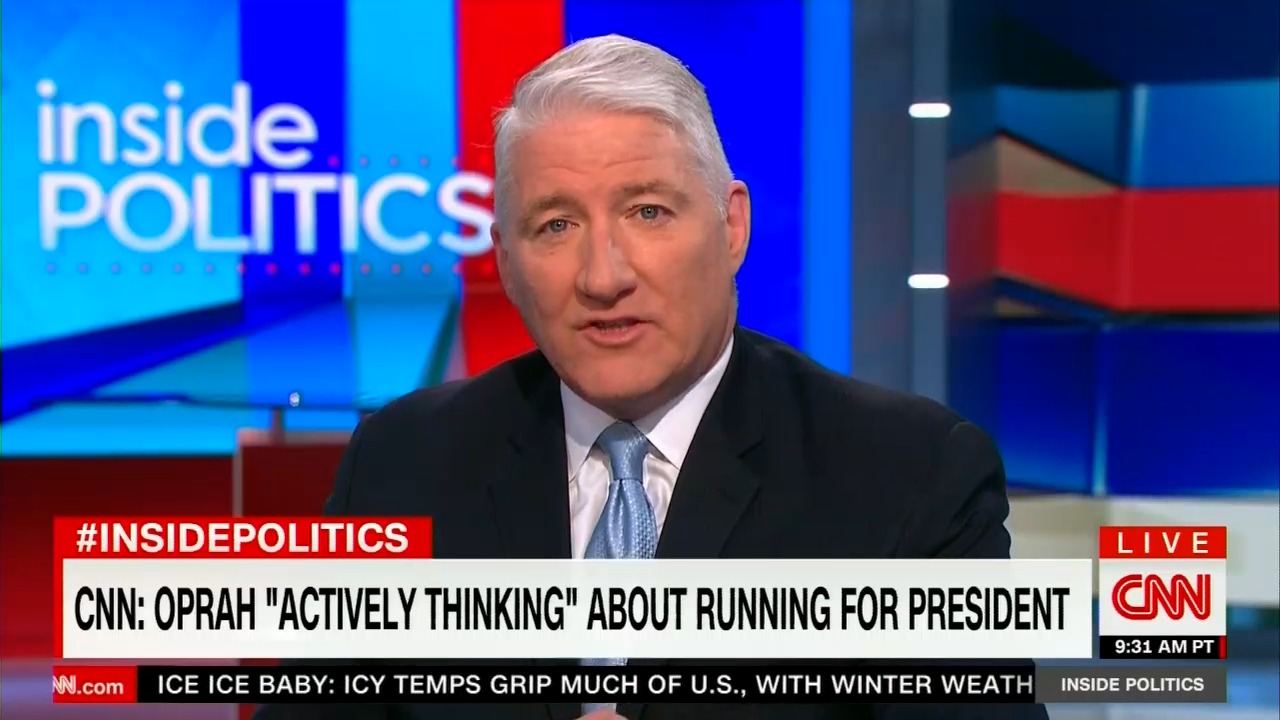 We know rank and file liberals aren’t happy to have a reality show host as their president. But we don’t know yet how they feel about their betters in the media anointing the Doyenne of Daytime TV as President Oprah.

After entertainment mogul Oprah Winfrey made waves with her acceptance speech for the Cecil B. DeMille award at the Golden Globes on January 7, Hollywood began to sing her praises, hoping to spark a presidential run. Media outlets like CNN followed suit, publishing a grand total of 7 Oprah-centered pieces on its front page on the morning of January 8. Senior media correspondent Brian Stelter wrote, “[Oprah’s] hopeful message -- ‘A new day is on the horizon’ -- could have doubled as a campaign rallying cry.”

On CNN’s New Day, Chris Cuomo stated, “Now that Oprah has been inserted into the 2020 thing, does that mean we can’t use her with that great sell-line for our show?” Alisyn Camerota responded, “No, I think we can use her. That needs to be a part of our branding. Until she formally announces.”

Cuomo then said, “Then, it’s got to go. But it’s too bad, you know, because it’s a big reason we named the show New Day, because of that hope of tomorrow.” Camerota gushed, “Yes, its on the horizon!”

The main headline on the CNN website was Stelter’s article, “Sources: Oprah Winfrey ‘Actively Thinking’ About Running for President.” It was then followed by 6 other pieces: “Read Her Rousing Golden Globes Speech,” “Oprah Is No Stranger to Politics,” “Analysis: Oprah Knew Exactly What She Was Doing Sunday Night,” “Is Oprah Mulling a 2020 Presidential Run,” “Opinion: Thank Goodness for Oprah. She Saved the Show,” and finally, “Trump in 1999: Oprah Would Be First VP Choice.” 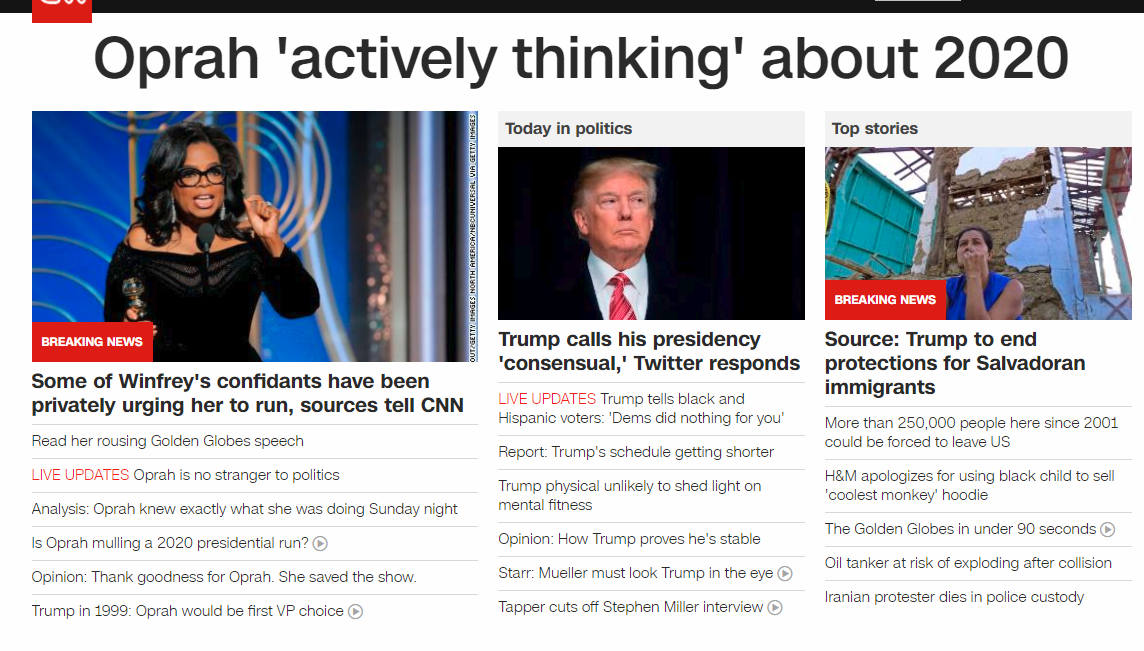 CNN political commentator Ana Navarro tweeted out, “If you live under a rock, or like me were on a plane w/no wifi, and missed this @Oprah speech at @goldenglobes last night, watch it.  If you did see it last night, watch it again. It is unifying, empowering, and inspirational. It’s ok to say, ‘Amen.’”

Winfrey defended the media in her acceptance speech, which may be why CNN and other news outlets are paying her homage and worship: “We also know it's the insatiable dedication to uncovering the absolute truth that keeps us from turning a blind eye to corruption and to injustice. To -- to tyrants and victims, and secrets and lies. I want to say that I value the press more than ever before as we try to navigate these complicated times, which brings me to this: what I know for sure is that speaking your truth is the most powerful tool we all have.” Soros funded Pro-Publica, a liberal non-profit newsroom, tweeted, “Oprah is fire. And so is her defense of the truth, and those who work to uncover it.” Apologies for any gagging.

However, even those on the left see the danger in the media endorsing Oprah for president. Liberal contributor to the Guardian Christian Christensen tweeted out, “Because what the US really needs is Oprah vs. Trump in 2020? No. That's what CNN, ABC, NBC, CBS, Fox, MSNBC, Bloomberg, Facebook and Twitter need in 2020. To hell with ordinary citizens. They need circuses, not bread.”

Hollywood raved over Oprah’s speech, with actress Reese Witherspoon saying, “I will now officially divide time like this : Everything that happened before @Oprah speech : Everything that will happen after.” Author Joyce Carol Oates tweeted: “Oprah for President would mean taking back the country from the rapacious wealthy & white nationalists naively enlisted to give them aid.” Oprah’s current net worth is 2.8 billion, while Trump’s net worth is 3.1 billion. How Oprah as president takes the country “back” from the “wealthy” is anyone’s guess.

Actress Meryl Streep told the Washington Post, “[Oprah] runs a major company. She could lead the country. Instead of leading the country down.” Sarah Silverman tweeted, “Oprah/Michelle 2020.”