Saturday’s NBC Nightly News aired a report filed by NBC News correspondent Lisa Myers in which she looked into President Obama’s tendency to award lavish jobs as ambassadors to some of his top campaign fund-raisers – whose qualifications in foreign policy are questionable – and in which she noted that Obama had criticized President Bush for appointing donors to positions in government. Myers: "It's worth noting that candidate Obama criticized President Bush for rewarding his donors with ambassadorships."

Anchor Lester Holt introduced the story: "Now to NBC News ‘In Depth,’ and another tradition still going strong in Washington: rewarding major fund-raisers with plum positions as foreign ambassadors. It's a custom apparently embraced by President Obama. One-third of his nominees raised big money for his campaign."

Another day with Barack Obama as President of the United States, and another media report on how he is going to save us from ourselves.

On NBC's May 14 "Nightly News," NBC identified a new problem facing society: credit card companies that use marketing gimmicks and low interest rates to lure in young borrowers. The solution, of course, is to continue the evolution toward a government that protects the individual womb-to-tomb.

"It is commencement season, which brings to mind all the joys of college graduation, and these days all the debts," "Nightly News" anchor Brian Williams said. "First, the student loans. But so often now, graduates enter the world with awful credit card debt and a chum - a crummy job market. President Obama talked about the problem today, urging Congress to crack down on companies that make the credit cards so enticing to students in the first place." 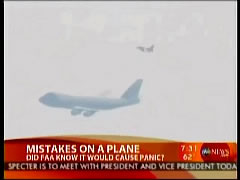 CBS's "Early Show" on Wednesday completely skipped any follow-up on the gaffe of having Air Force One fly over New York City on Monday, terrifying residents. Instead, the program highlighted stories on Barack Obama's first 100 days and still found time for a piece on male celebrities and whether or not they are gaining too much weight. ABC's "Good Morning America" and NBC's "Today" both had segments on the developing story and the revelation that the exercise, designed as a photo op for the White House website, cost $328,000. ABC reporter Jake Tapper intoned, "Asked if the President thinks the costs in both money and stress were worth it, the White House said no."

He also explained to viewers that Senator John McCain had written a letter to the Defense Department, charging, that the flight "represents a fundamentally unsound exercise in military judgment and may have constituted an inappropriate use of the Department of Defense resources." Tapper labeled the debacle a "terrifying photo op." "Today" correspondent Lisa Myers covered similar ground and speculated, "And what about the cost to taxpayers during a financial crisis?" She featured a clip from Steve Ellis of the organization Taxpayers for Common Sense. He charged that the "government wasting money on a photo shoot really flies in the face of fiscal responsibility." 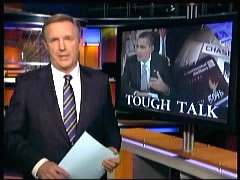 Instead of providing any suggestion President Barack Obama's hectoring of credit card company executives, with the not-so-subtle threat of further regulation, is an improper strong-arm tactic, the network evening newscasts on Thursday night hailed Obama's efforts to “protect consumers” -- in stories each complete with a sympathetic victim of jacked-up interest rates, but barely any time, if any, for a view contrary to Obama's.

Too bad this particular report didn't include an expert that was railing against the TARP (Troubled Asset Relief Program) bailout before it was passed last October. They could have said, "I told you so."

Global banks lending money to other countries including "the playground of the Middle East" may have angered Congressmen, but Lisa Myers investigation didn't point out that those critics of how the banks lent money voted for TARP (Troubled Asset Relief Program) in the first place. 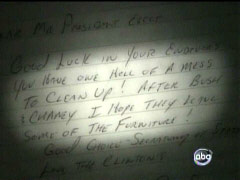 On Monday’s World News, ABC showed a letter written to Barack Obama that made a snide crack charging that President Bush and Vice President Cheney had left Obama a "hell of a mess to clean up," and sarcastically expressing hope that Bush and Cheney would not steal furniture from the White House, as correspondent Kate Snow filed a report about a former school teacher, B.J. Hill, who has spent a year walking across the country collecting letters from Americans for the next President. Of the five letters Hill was shown reading during the report, all came across as either pro-Obama or at least phrased from a liberal point-of-view, one even expressing a desire that the next President would "save science, including stem cell research," presumably referring to federal funding of embryonic stem cell research. But while no letters expressed any concerns about what Obama would do from a conservative point of view, one of the letters did take a shot at President Bush and Vice President Cheney. Hill, reading: "You have one hell of a mess to clean up after Bush and Cheney. I hope they leave some of the furniture."

You would think what donors are cozy with which campaigns - especially in the midst of a presidential election cycle - might be a relevant story for the media,  especially at a time when everyone is quick to point fingers at which political party is to blame for financial turmoil.

When Lehman Brothers CEO Richard Fuld testified before the House Oversight Committee Oct. 6, the media criticized his wealth and spending amidst financial turmoil in his company and on Wall Street. But conspicuously missing was the story of Fuld's political contributions.

With fresh media polls showing Sarah Palin causing a sizable percent of women to shift to support John McCain from Barack Obama, CBS and NBC on Tuesday night devoted full stories to fact check examinations to discredit her, specifically on the so-called “Bridge to Nowhere,” even though all the newscasts have already run stories on how she was for the bridge earmark during her 2006 gubernatorial campaign. Introducing a “Reality Check,” CBS anchor Katie Couric asserted:

There's also controversy over the way Governor Palin is trying to attract voters by portraying herself as a reformer opposed to government earmarks. And the example she continues to cite is her opposition to the infamous Bridge to Nowhere. But she doesn't quite tell the entire story...

Wyatt Andrews concluded: “By repeating the claim she said no thanks to the bridge, the implication is that Governor Palin confronted a Congress recklessly wasting money. The record shows, she wanted that bridge until the end and kept the money.” Over on NBC, anchor Brian Williams recalled how Palin's convention speech had “several memorable applause lines. It's how a lot of people came to know her.” But, he asked, “how do they all match up against the truth? Our senior investigative correspondent Lisa Myers takes a closer look.”

American capitalism - it's so great even the Chinese Communist government loves it!

That's sounds like it ought to be a bumper sticker, but the January 16 "NBC Nightly News" advised it is something we should be cautious of.

Foreign investors have been on a buying spree in the U.S. stock markets - as stock prices have fallen with all the skittishness in the wake of the credit crunch.

"So far foreigners buying chunks of Wall Street has not triggered the same political uproar as a Dubai company's ill-fated effort to take over operations of U.S. ports, perhaps because politicians know the alternative could be painful," NBC correspondent Lisa Myers said.

Have you run up your credit card on a shopping spree, now feeling the squeeze because you can’t pay the minimum balance? It’s all the economy’s fault, according to the December 26 “NBC Nightly News.”

NBC on Thursday night became the first broadcast network to air a story on the Clinton presidential campaign scandal over donations from Norman Hsu, a fugitive from a grand theft charge who is also suspected of illegally funneling excess donations through another family. While ABC's World News and the CBS Evening News, as well as the NBC Nightly News, found time for a third straight night of coverage of Larry Craig's travails, only NBC caught up with FNC and CNN and highlighted the fundraising irregularities involving Democrats. Lisa Myers noted how Hsu has “given a quarter of a million dollars to a who's who of Democratic candidates in the last three years. But Hsu is also a fugitive, wanted in California in connection with a 1991 fraud case. The Clinton campaign initially defended Hsu, listed on her campaign honor roll as a man of integrity. Today the Senator said she's giving his $23,000 in donations to charity.”

Over video of a small, lime-colored house in Dale City, California, Myers also relayed how “questions also have been raised about big donations Hsu raised for Senator Clinton from others, some seemingly of modest means. This house in California is one of Clinton's biggest sources of campaign cash. Campaign records indicate that six members of a family listed at this address have given Clinton $45,000 since 2005 and a total of $200,000 to Democratic candidates.” Myers concluded by recalling an earlier scandal much of the media were reluctant at the time to pursue: “It resurrects images of campaign finance scandals during her husband's presidency, of Johnny Chung handing over a $50,000 check in the First Lady's office and donors sleeping in the Lincoln bedroom.”