Behar: Bill Clinton's Accusers Are 'Tramps,' But Hillary Knows 'He Did Those Things'

Much is being made of The View host Joy Behar's outrageous smear earlier this week of three women who have accused Bill Clinton's sexual assault and unwanted sexual advances as "tramps." The blowback is richly deserved, especially because compelling evidence indicates that these women are the victims, not only of Bill Clinton, but of Hillary Clinton's enabling behavior and actions.

Behar has apologized for her remark, but her apology hardly excuses the tone of the discussion. Whoopi Goldberg wrongly described the three Bill Clinton victims to whom, Behar's later said, he "did those things" (Juanita Broaddrick, Kathleen Willey and Paula Jones) as people who had "slept with" him, as she insisted that Mrs. Clinton is "the victim in this" — while advising the audience that someone who had to be in the same room with women who "had slept with your man" wouldn't be "polite." 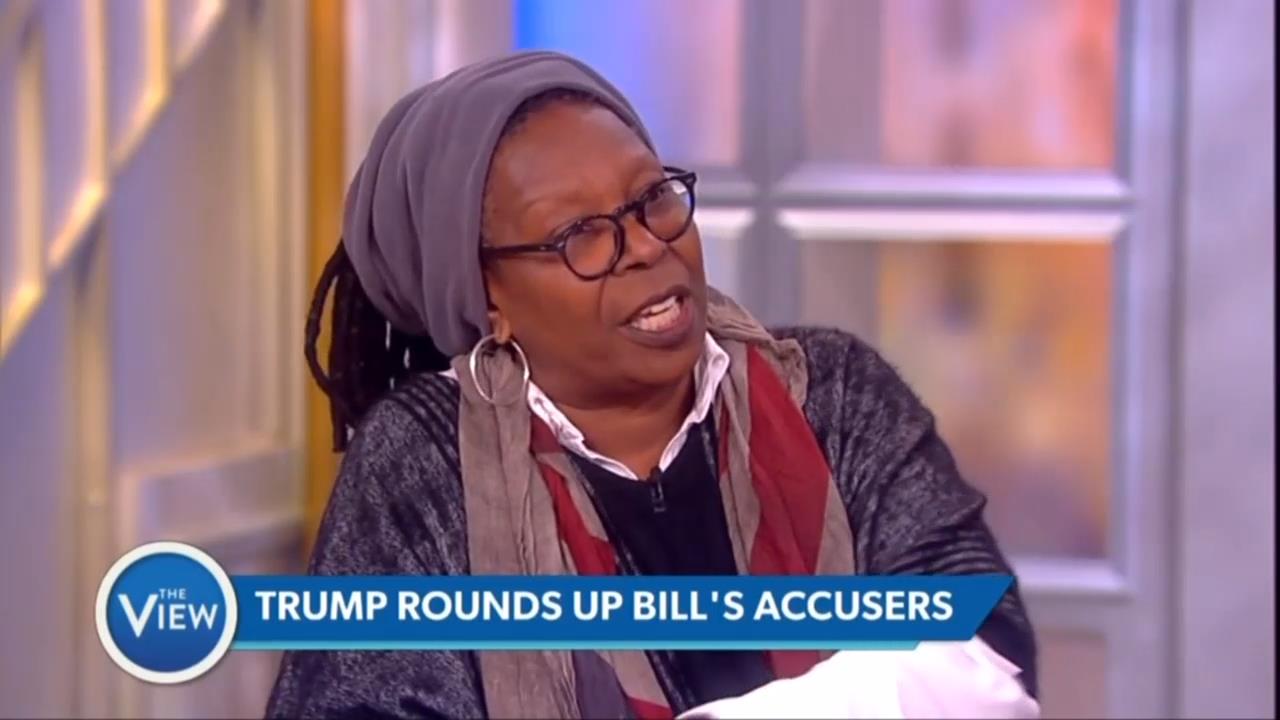 WHOOPI GOLDBERG: May I just point this out, several of those women slept with him knowing he was a married man, okay?

Behar's apology also won't reverse her damning admission, seen at the end of the video segment posted after the jump, that Hillary Clinton "knows now that he (Bill Clinton) did those things" he has been accused of. Yes, that is what she said.

The video snip which follows begins with Sunny Hostin reciting (and grossly mischaracterizing) the stories of Jones, Willey and Broaddrick (as well as that of Kathy Shelton, a rape victim who attacker, defended by Mrs. Clinton, escaped with minimal punishment), while repeating Goldberg's "slept with him" nonsense. Then, Hostin opined that Mrs. Clinton "missed an opportunity" to explain her situation so that people could understand it — leading to Behar's "tramps" tag.

Finally, as seen at the end of the clip, Sara Haines wondered at how Mrs. Clinton, given Bill's track record, could have stayed with him for so long, led to Behar's startling "now she (Hillary) knows" admission:

Transcript (bolds are mine, with frequent breaks for necessary commentary):

SUNNY HOSTIN: Let me say this. Paula Jones, one of the women, says that she was sexually harassed.

That's it? Paula Jones was far more than "sexually harassed," and what really happened deserved far more than a single, borderline dismissive sentence.

Her case "led to the District Court's hearing of Jones v. Clinton, which led to the Lewinsky scandal, when Clinton was asked under oath about other workplace relationships, which led to charges of perjury and obstruction of justice and the impeachment of Bill Clinton."

The original incident, more fully described here, involved physical contact, a boss-subordinate atmosphere of intimidation, and, in substance (people don't settle for more than the amount the plaintiff wants), a virtual admission of guilt:

HOSTIN: Juanita Broaddrick says that she was raped, not that she consented to having sex with him.

JOY BEHAR: And what happened with that case?

HOSTIN: And, uh, what happened with that case? Um, no charges and she, at first said, you know, it wasn't true, and then she said it was true.

This is an even more disgracefully terse description.

Broaddrick "had denied the assault in an affidavit, which she would later retract after being contacted by independent counsel Kenneth W. Starr's office" in March 1998. Starr's work ultimately led to Bill Clinton's impeachment by the U.S. House of Representatives in December.

NBC's Lisa Myers interviewed Broaddrick in January 1999. After the network "wrestled for weeks with whether to air" that interview and appeared to be on the brink of suppressing it, even after the U.S. Senate failed to convict Clinton on the impeachment charges, Pulitzer Prize-winning Wall Street Journal editorial board member Dorothy Rabinowitz broke the silence when she separately interviewed Broaddrick in February, and wrote:

... to encounter this woman, to hear the details of her story and the statements of the corroborating witnesses, was to understand that this was an event that in fact took place.

Rabinowitz later said: "There are moments in your life when you know ... you know this is not a story that should be suppressed." At the fledgling Fox News cable channel, Brit Hume, then its Washington managing editor, described the situation as "one of those cases where everyone knows the deal but readers and viewers. ... She is telling a story that is relevant to what sort of man ... (Bill Clinton) is."

"Everyone knew the deal," but NBC was clearly ready to keep the truth away from the nation until Rabinowitz forced their hand. To this day, the establishment press, with only rare exceptions, won't tell America anything more than what Hostin said on The View, despite "five witnesses and a host of circumstantial (though no physical) evidence" supporting Broaddrick's rape allegation.

It's a situation that doesn't even qualify as "she said, he said" — because Bill Clinton has never personally denied her charges, instead having his lawyer issue a cryptic statement not even identifying him by name that "Any allegation that the president assaulted Mrs. Broaddrick more than 20 years ago is absolutely false." Clinton and his lawyer must surely know a personal denial would instantly lead to legal action, and that whatever story he might concoct in his defense would be destroyed during discovery.

Finally, in regards to Broaddrick, there's her insistence that Democratic nominee Hillary Clinton, far from being the "victim" Whoopi Goldberg insists she is, knew about the rape, and engaged her in an encounter designed to intimidate her into silence just two weeks later. If one believes that Ms. Broaddrick's rape is "an event that took place," as Rabinowitz did after a two-day interview, one can hardly dismiss her charge of intimidation and therefore Mrs. Clinton's direct involvement in covering up for an enabling a sexual predator.

SUNNY HOSTIN: Kathleen Willey says that, uh, she was groped ...

Kathleen Willey has said a lot more than that "she was groped." Willey was also interviewed by a major network, in this case by the late CBS Reporter Ed Bradley of 60 Minutes in March 1998. Here is CBS's summary (full transcript here):

In the interview, Willey told Bradley that the president took her into a study where she told him she had to give up her work as a volunteer and she needed a paying job at the White House.

She said that at that point Mr. Clinton put his arms around her, consoled her, hugged her and then kissed her on the lips. Willey said the president then fondled her breasts, told her he had "wanted to do this ever since he first laid eyes on her" and then placed her hand on his crotch.

Mrs. Willey explained that she pushed away from the President and said "I think I better go." Outside the Oval Office, she said she ran into Linda Tripp and told her what had happened.

According to the Publisher's notes for her 2007 book, Willey alleges that "when her name ... surfaced as a potential witness in litigation involving the president," Mrs. Clinton — the "victim here," according to Whoopi Goldberg —  she "found herself on the receiving end of a Mob-style campaign of threats and intimidation." Willey "concluded that it was Hillary Clinton herself" behind the intimidation. She also claims that a private investigator admitted "that he was hired by Hillary Clinton to investigate Willey and bore responsibility for acts of harassment and intimidation designed to silence her explosive testimony of sexual assault by President Clinton in the Oval Office."

HOSTIN: ... and then another woman says that Hillary Clinton as an attorney represented the man that raped her.

The fact that Mrs. Clinton represented the alleged rapist of Kathy Shelton in 1975 is not at issue. What matters is Mrs. Clinton's documented attitude towards the case's conduct and result:

... Shelton, now 54, said she was raped when she was 12 by a factory worker on the side of a rural road in Arkansas. Clinton, who defended the factory worker, had his charges reduced from first-degree rape to “unlawful fondling of a child under 14″ and he served just 10 months in prison.

... Shelton tweeted. “She terrorized me during my rape case & later laughed about it.”

The laughing to which Shelton referred occurred "in an on-the record interview with a journalist" in the mid-1980s.

Mrs. Clinton, the Great Protector of Women, laughed when noting that her client passed a polygraph test, "which forever destroyed my faith in polygraphs" (i.e., she laughed at how the false reading protected a client she clearly felt was guilty of rape).

She also laughed after recounting how the forensics lab had accidentally thrown away evidence that would likely have led to her client's conviction, which enabled her to claim that convicting her client without the evidence would be a "miscarriage of justice" (i.e., she laughed at how fortunate her guilty client was to escape serious punishment).

The descriptions of the four cases provided here have been detailed so that readers can share the truth about them with others, all in one place — because, sadly, almost no one else has done this.

Here's the rest of the The View segment video, including Behar's "tramps" sarcasm, aka her bid to be this generation's James Carville:

HOSTIN: So, y'know, this is the thing though, to your point (looking at Whoopi Goldberg), which was, if a woman sleeps with your husband, you're not necessarily going to embrace them.

I wonder why she didn't have — that's why when he brought up this, these allegations, I wonder if she missed the opportunity to address it in a way that the public would understand, that that's just not how you to behave — 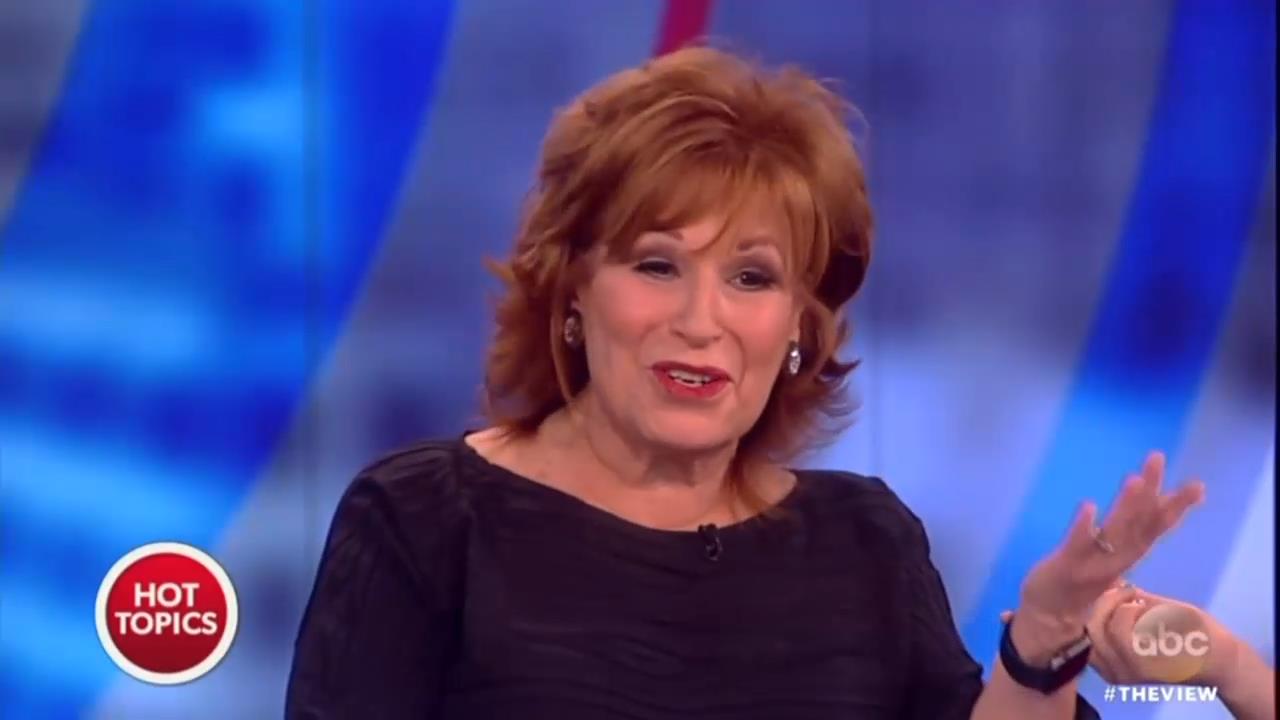 JOY BEHAR: (imitating an "apology"): "I would like to apologize to those tramps that have slept with my husband." Maybe she could have said that.

She can't really believe it and stay with him, can she? Like -

HAINES: Could she stay with Bill if she knew he had done these things. And if she know he did —

BEHAR: Well she did stay with him. What do you mean "could she"? She did.

HAINES: But if she believed he did those things.

BEHAR: She knows now that he did.

HAINES: Okay, so he did those things.

BEHAR: Listen, they're both dogs. We've said this.

So three panelists — Whoopi Goldberg, Sunny Hostin and Joy Behar — have all characterized a man's nonconsensual groping, harassment and rape of women as the functional equivalent of these women "sleeping with" him. Behar isn't the only one who needs to apologize to all women everywhere.

As to Hostin believing that Mrs. Clinton might have a way to explain her attitude and behavior in connection with all of this "in a way that the public would understand" — she didn't because doesn't have one.

Even someone aptly described as a congenital liar (William Safire's New York Times, 1996), as Mrs. Clinton has been, would be hard pressed to come up with a good reason why she would stay with someone with an up to three-decade record of sexual assault and harassment. Telling the American people the only credible reason why she has acted as she has and made the choices she has made all these years — "Well, I had to stick with this guy, because he was the ticket to where I wanted to go" — wouldn't go down very well.

As to Behar's admission at the end — "She knows now that he did (those things)" — well, it's been decades, but better late than never. By procession of elimination, it appears that her "they're both dogs" reference has to be to the Clintons; after all, the whole discussion is otherwise about Bill Clinton's three victims or Hillary Clinton's four.

So that must mean that you now agree that Donald Trump's timely reminder of what Bill Clinton has done, and what Hillary Clinton has enabled, and who they are — in your words, "dogs" — has been a valuable public service. Right, Joy?