Lisa Myers: TV Politics News Has 'All the Depth of Twitter'

Sharyl Attkisson, the former CBS investigative reporter whose book Stonewalled exposed liberal bias, has been no wall flower when it comes to speaking out about the kind of standards (or lack thereof) seen in journalism today.

In former NBC reporter Lisa Myers, she finds a kindred spirit. On Friday, she wrote “Lisa Myers sounds like me. She is also a former network news investigative journalist. She left her longtime job at NBC about the time I left my longtime job at CBS. To me, it is interesting that some of our experiences and thoughts are so similar.”

Myers was in Iowa recently to give a lecture about television journalism as well as her many decades of reporting politics. The Des Moines Register sat down and interviewed Myers, and for the sake of keeping on the subject of the deterioration of journalism, I have only included those questions pertaining to that subject.  You can read the entire interview with Myers here.

Q: What is the state of TV journalism today? 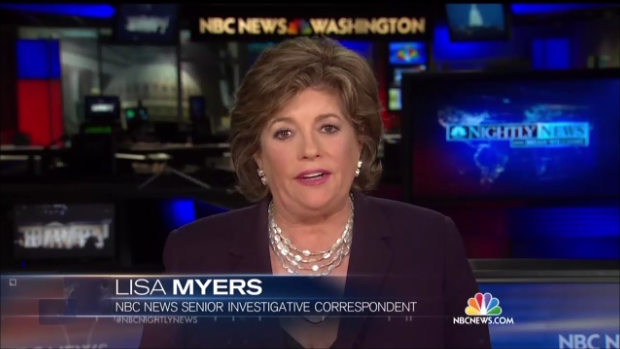 Lisa Myers: I am going to talk about the deterioration in the quality of journalism you see on TV. I think the primary mission of journalism is to hold the powerful accountable, be they in government or corporate America. There is less and less interest in network television today holding the White House or any other part of government accountable. I fear there is a calculation that the audiences they are trying to reach don’t care that much about the serious news. I think most of the political coverage these days has all the depth of Twitter.

I also worry that journalists today appear to have chosen sides when it comes to political coverage. I think you see that in the sagging approval numbers of TV news over the last few years. We’ve seen trust in the media hit its lowest level ever in 2013 or 2014 surveys and I think the lack of depth and the feeling that too many journalists have chosen sides has caused viewers to question whether we are giving it to them straight and whether we are making a politically balanced presentation.

Q: Do you believe there is a place for entertainment journalism on TV?

Of course, but you do not see the kind of in-depth substantive policy pieces or investigations nearly as often as you used to. The stories get shorter and shorter and the sound bites get shorter and shorter. Look, there is a place for celebrity news, for feel good stories, all those things have a legitimate place in various newscasts, but it should not always be at the expense of the more-in-depth stories or investigations that networks used to. I am speaking industry-wide, not speaking about any specific network.

Q: What advice do you give college-age journalists?

I would say two things: Learn to write whether you are going to do newspapers or television, and be politically objective and balanced. Also, if you get a chance to be on the debate team or do something that involves making public presentations and speaking and thinking on your feet, that can be a tremendous asset.

When asked about the Brian Williams scandal, Myers said "I continue to have a lot of great friends at NBC. No one would wish this on anyone. I think Steve Burke (CEO of NBC Universal) did what he had to do. I am not privy to the internal investigation, so I don't know what will transpire from here. I think Andy Lack is a great choice to lead the network. He is a strong leader and a great experienced newsman. He has relationships with a lot of key people and people trust him."