Since last night, Matt Drudge has teased his link to CNN's coverage of Hillary Clinton "heckler" Katherine Prudhomme O'Brien with the following headline: "Clinton heckled in NH by rape survivor."

The headline at CNN's story by Dan Merica is quite different: "NH GOP lawmaker heckles Hillary Clinton over Bill Clinton's sex scandals." The headline difference is not unusual. What is unusual is that Merica's article as currently posted never refers to O'Brien as a "rape survivor" (which, by the way, she has said since at least 2000). Since Drudge usually refers in some way to a story's content when he writes his headlines, this opens up the possibility that earlier versions of Merica's story did mention O'Brien's rape survivor status, and that CNN censored it. What we do know is that CNN and Merica made sure that readers of their story wouldn't know that Juanita Broaddrick credibly accused Bill Clinton of raping her, and that they treated Clinton's one-man war on women sexual history as entirely "alleged" (bolds are mine):

Merica and CNN did this despite the fact that Clinton has admitted to much of what has been supposedly only "alleged" or has been legally found to have lied in defending himself (bolds are mine):

When Clinton began taking questions at a Derry town hall, Katherine Prudhomme O'Brien, a GOP state representative from Rockingham, stood up feet from Clinton and began shouting. After Clinton dispatched the protestor once, O'Brien tried again during another lull in the program.

"You are very rude, and I'm not ever going to call on you," Clinton said forcefully, looking directly at the woman. "Thank you."

O'Brien's shouts were inaudible to most in the audience because a chorus of Clinton supporters repeatedly booed her, but after the event, the lawmaker said she was trying to ask the 2016 candidate about her husband's sexual impropriety decades ago. 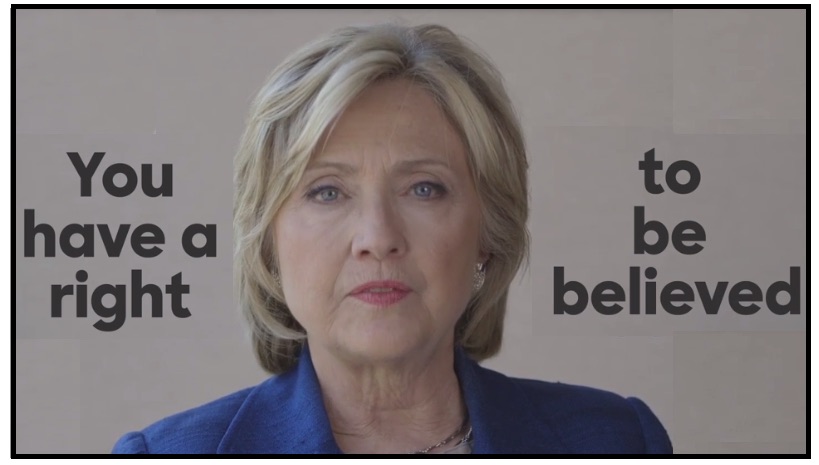 Clinton rolled out a plan to address campaign sexual assault in 2015, telling an audience in Iowa that rape victims "have the right to be believed."

... But some, especially Republicans who are bothered by Bill Clinton's alleged sexual impropriety, saw the comment as hypocritical.

... A woman asked her last month about Juanita Broaddrick, Kathleen Willey and Paula Jones, all woman (sic) who have accused Bill Clinton of sexual impropriety.

... Republican front-runner Donald Trump said last week that Monica Lewinsky, Paula Jones and the "many" other women who have accused Bill Clinton of having affairs were "fair game" on the campaign trail.

Merica's use of the term "sexual impropriety" is classically disingenuous. "Impropriety" could be as relatively harmless as an off-color joke. What's really involved here is rape (Broaddrick, as she detailed in a nationally broadcast 1998 interview with NBC's Lisa Myers, who publicly stated just last year after she left the network that "Nothing...undercuts what Juanita Broaddrick said"), sexual assault (Willey, as detailed in a 1999 "60 Minutes" interview), and gross sexual imposition (Jones).

In the final excerpted paragraph, Merica's plainly written English lumps Lewinsky in with others who have "accused" Clinton of having affairs — as if that's as far as her claims went. Hardly:

Failure to identify Katherine Prudhomme O'Brien as a rape survivor (even "self-described," which might have been acceptable in the circumstances, depending on the underlying facts) would have gotten in the way of the obviously important exercise of minimizing the seriousness of Bill Clinton's sordid one-person war on women. We can't have that.