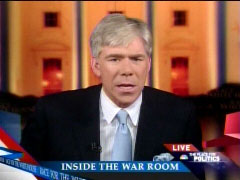 Kudos to NBC's David Gregory for making a relatively rare declaration of just how fanatically anti-Israel the terrorist group Hamas actually is.

Schultz Defends His ‘McCain is a Warmonger’ Comment on CNN

Liberal talk show host Ed Schultz, appearing on Monday’s "American Morning" on CNN, defended his labeling of John McCain as a "warmonger" at a recent Obama campaign fundraiser, despite the statement being repudiated by Obama’s campaign. Twice, Schultz stated that "the man [McCain] is a warmonger" and used the term a total of five times during the course of the interview. Not only did Schultz defend his remark, he also claimed that McCain mistreated his fellow veterans with his votes on veterans’ benefits. [Audio available here.]

Co-host John Roberts, who interviewed Schultz, compared the talk show host’s remark to Bill Cunningham’s use of Obama’s middle name "Hussein" at a February 2008 McCain rally and how the Republican candidate repudiated Cunningham. At the same time, Roberts didn’t press Schultz too hard on the "warmonger" labeling.

Remember the brouhaha the liberal media made out of Cincinnati radio host Bill Cunningham mocking "Barack Hussein Obama" at a McCain fundraiser, which McCain quickly rejected? Now the same thing (only bigger) has happened on the left. Radio Equalizer reports that at a Democratic Party fundraiser in Fargo on Friday that Obama later addressed, nationally syndicated liberal talk show host Ed Schultz slammed John McCain as a "warmonger." On Saturday, the Obama campaign repudiated the comment. But will the same networks that played up the Cunningham remarks (say, CNN) have the same fervor for the Obama-punts-Schultz story?

The Equalizer expects flying fur on the left: "While Obama is clearly looking to the general election and what will be expected of him, this is likely to go over about as well with the left as the suspension of Randi Rhodes by Air America. Don't expect Schultz to let this go without a fight."

It will make Monday's Schultz show worth sampling. From AP, which had the decency to employ the L word to describe Ed:

Unless you've been out of the country without access to a television or a newspaper the past couple of weeks, you are infinitely aware that the media have surprisingly been coming down strongly on some of former President Bill Clinton's recent antics on the campaign trail.

A shocking line in the sand was crossed on Wednesday's "Hardball" when liberal talk radio host Ed Schultz actually called Bill Clinton a liar, and Chris Matthews seemed to agree.

Following the recent GOP debate in which CNN chose to air a YouTube question putting candidates on the spot as to their belief in the literal truth of the Bible, there was much breast-beating as to the inappropriateness of religious tests for office.

But that didn't stop Tucker Carlson's two liberal guests this evening from taking potshots on religious grounds at President Bush and Mitt Romney.

In a bigtime case of the pot calling the kettle black, liberal talk radio host Ed Schultz is attacking the credibility of Air America radio host Randi Rhodes concerning her highly dubious story about her non-mugging last Sunday outside an Irish bar in New York.

On August 28, radio talk show host Ed Schultz, who has proclaimed that he became "converted" from conservative to liberal while eating a baloney sandwich with his future wife in a Salvation Army cafeteria, loudly issued a challenge to all conservative radio hosts to debate him.

Reminiscent of the movie Rashomon, liberal talk radio host Ed Schultz had an encounter in a bar which occurred in different ways depending on which witness is recounting what happened. Actually there are Rashomon versions of how this former conservative became a liberal in the first place.