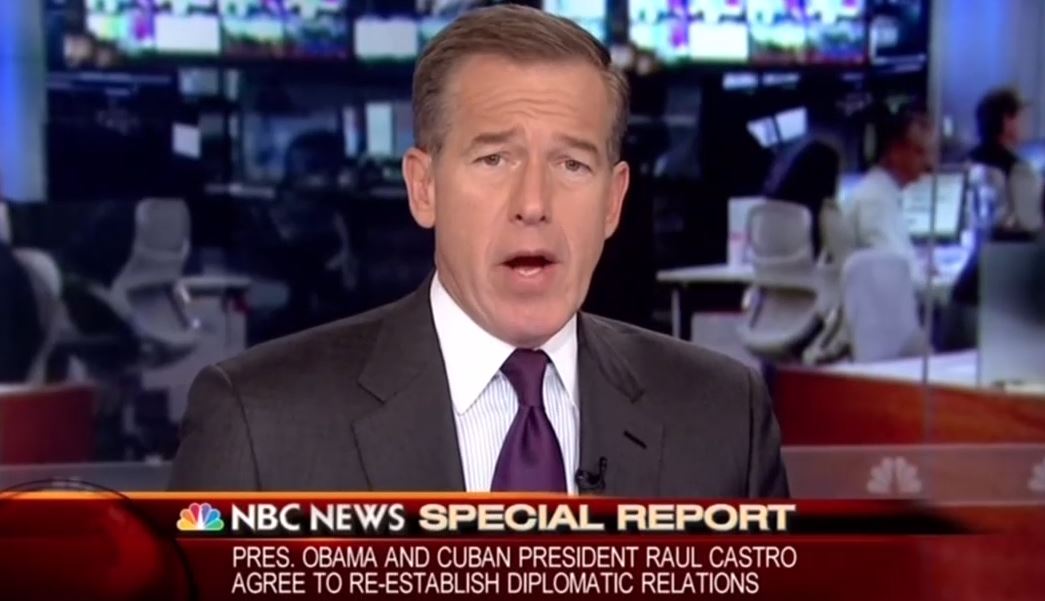 Donald Trump’s summit with North Korean dictator Kim Jong-un has been met with skepticism from liberal journalists with the likes of CBS correspondent Bianna Golodryga railing: “The self-proclaimed dealmaker in chief has so far proven to be more of a deal breaker, tearing up international deals.” CNN global affairs analyst Max Boot huffed that Trump’s Singapore meet-up was something “any previous president could have done.”

And MSNBC analyst Jon Meacham whined: “Just because something hasn't happened before, doesn’t mean it's historic.”

But this is a far cry from the liberal media’s reaction to Barack Obama’s December 2014 deal with Cuban dictator Raul Castro. Back then journalists didn’t wait for results, as then-NBC Nightly News anchor Brian Williams hailed the “day of momentous change.” His NBC colleague Chuck Todd cheered: “This feels like the last brick to disappear from the relic of the Cold War.” And MSNBC’s Ed Schultz compared Obama to Ronald Reagan when he effused: “Isn’t this Barack Obama’s ‘tear down this wall, Mr. Castro’...kind of a moment?”

But three-plus years later Cubans still live under a dictatorship and still don’t get to vote for who leads them.

The following are the most exuberant reactions from the liberal media to Obama’s initial announcement of a thaw with Cuba back in December 2014, as culled from the MRC’s archives:

Host Brian Williams: “A momentous day, especially for those Americans old enough to remember the Cold War. The curtain came down between Cuba and the United States in January of 1961 and in just a moment diplomatic relations, at least the first steps to which, will be reestablished....It is a day of momentous change, fast-moving change.”...
Correspondent Chris Jansing: “Unbelievable. Fifty years of change. The first phone call, as you mentioned, between the leaders of these two countries since the revolution. And we’re going to hear from the President that this doesn’t need to be a relationship that’s frozen in time.”...
Williams: “This momentous day between these two nations, something tumbled down that has been in place for half a century.”
— NBC News special report, December 17, 2014.

“Isn’t this Barack Obama’s ‘tear down this wall, Mr. Castro’ – that kind of a moment? I mean, if change can take place with the Soviet Union, why can’t it take place with the Cuban people here?”
— Host Ed Schultz on MSNBC’s The Ed Show, December 17, 2014.

“More than 25 years after the Berlin Wall fell, this feels like the last brick to disappear from the relic of the Cold War wall.”
— December 17, 2014 tweet from NBC’s Meet the Press moderator Chuck Todd.

Light Up Those Cuban Cigars!

Host Robin Roberts: “Now to that historic announcement, the U.S. restoring relations with Cuba, ending the 50-year Cold War. The surprise coming after a year and a half of secret talks involving Pope Francis. ABC’s Jim Avila is in Cuba this morning. Good morning Jim.”
Correspondent Jim Avila: “Good morning Robin. Just how big of a deal is this? Well, soon many more Americans will be able to hop a plane to Havana, take a tour, even legally buy one of those famous cigars. For the first time in 50 years, the presidents of the United States and Cuba speaking simultaneously, confirming the surprise reversal of a long-running U.S. policy of isolating Cuba.”
— ABC’s Good Morning America, December 18, 2014.

Anchor Brian Williams: “Inside Cuba, while some Americans remain suspicious, Cubans seem to embrace a new era of relations with the U.S. and the change can already be felt in the streets.”...
Correspondent Andrea Mitchell: “The Assistant Secretary of State will be going to Havana leading a delegation next month followed shortly afterward by Secretary Kerry trying to open the door to Cuba. Even as Cuban-Americans in Congress and other critics try to keep it shut.”
— NBC Nightly News, December 18, 2014.

“Congressman, to sit and just look at the last 50 years and continue as is has been nothing but a failure versus taking a step to open the door to the future, to liberating 11 million Cubans, to bringing them into the 21st century. How do you argue with that with the argument that we are giving in to terrorists? It is such a flawed argument. This is not ISIS. This is a country 90 miles away. This has been long coming. And aren’t you just giving us the typical Republican ‘I have to say this.’”
— Substitute host Donny Deutsch to Rep. Mario Diaz Balart on MSNBC’s Morning Joe, December 18, 2014.