Rubio's Age Is Problematic, But Hillary Being Post-Menopausal Makes Her 'Perfect'?

Time.com's Zeke Miller tweeted yesterday that a "reporter" asked recently declared presidential candidate Marco Rubio of Florida the following question: "Is 43 old enough to be president?" Meanwhile, two weeks ago, a column at Time.com claimed that Hillary Clinton is "biologically primed to be a leader." Seriously.

Since he either can't or won't tell us who asked the question, we're unable to determine if the "reporter" to whom Miller referred was asking the question because he or she doesn't know the Constitution or was trying to bait Rubio into giving an answer implicitly or explicitly criticizing other candidates. It would be worth knowing, because the first answer betrays ignorance, while the second reveals bias and a likely double standard in interviewing. Miller's tweet, which includes Rubio's priceless answer, is after the jump:

This means that Rubio would be 45 on Inauguration Day if he is elected (actually 45 years, 7 months and 23 days). That's less than 22 months younger than Barack Obama (47 years, 5 months, and 16 days) when he was inaugurated. Both John Fitzgerald Kennedy (43 when inaugurated) and Theodore Roosevelt (42 after William McKinley's assassination) were younger when they became president.

One commenter at Miller's tweet specifically asked for the reporter's name. From what I can tell at the tweet's thread and in his Twitter feed up to about 3:30 p.m. Eastern Time, Miller hasn't answered.

If anyone has asked Hillary Clinton about whether her relatively advanced age is a problem, I'm not aware of it, even though it was a press near-obsession during John McCain's presidential run — only after he had secured the Republican Party's nomination, of course. Apparently, the push is on to see it Mrs. Clinton's age as a feature, and not a potential bug.

A "Dr." Julie Holland at Time.com, Miller's hangout, thinks that "Hillary Clinton Is the Perfect Age to Be President," especially — get this — because she is "of a certain age" (bolds are mine):

Forget politics — she's biologically primed to be a leader 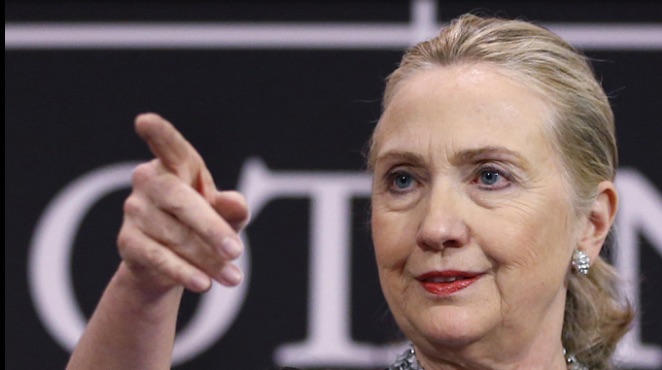 At 67, Hillary Clinton is now a “woman of a certain age.” So much emphasis and worry are put on physical aging in women that the emotional maturity and freedom that can come at this time are given short shrift. That robs everyone of a great natural resource. For women of a certain age, it is our time to lead. The new standard for aging women should be about vitality, strength and assertiveness.

One of the largest demographics in America is women in their 40s to 60s, and by 2020 there will be nearly 60 million peri- and post-menopausal women living in the U.S. Because women’s average life expectancy is currently 81 years, we’re easily spending a third of our lives postmenopausal. That is a great opportunity for growth and change.

Holland, "a psychopharmacologist and psychiatrist" last seen at NewsBusters in 2009 discussing "the positive aspects of smoking marijuana," brags about having written a book called "Moody Bitches," and further explains why Mrs. Clinton is so uniquely qualified:

... I look at how women are taught from an early age that moodiness is a problem to be fixed. That is simply wrongheaded. Women’s moods are our body’s intelligent feedback system. If we learn to manage them properly, they are a great resource and a tremendous source of power. They show us when we are primed for certain challenges and opportunities.

Translated: "Since none of you guys running for president have 'women's moods' and therefore their 'tremendous source of power,' get the heck out of the way and let her be become the nation's 45th president already. Oh, and if you're a post-menopausal woman and don't vote for Hillary, you're not only betraying the sisterhood; you're also betraying your fellow older sisters."

Thus, Holland plays the ageism and gender cards at the same time. Amazing — especially since Holland's appearance at a site link Time.com would seem to indicate that this will be (or may already be) a conscious political strategy.