Yesterday, in a column at his organization's web site, the head of the nation's leading polling organization called the government's official unemployment rate, currently at 5.6 percent, a "big lie."

Rest assured that if Gallup Chairman and CEO Jim Clifton had written this column during a Republican or conservative administration, his words would have been picked up by the Associated Press and the New York Times, and would have echoed across the Big Three networks' nightly newscasts. Instead, because relatively good-looking government data is sacrosanct during a Democratic administration, an expansive Google News search at 1:15 p.m. ET on "Gallup unemployment lie" (not in quotes, showing similar items and duplicates) returned only 26 items. Almost all of them are from center-right blogs and outlets. One exception is an item at Fortune.com which accuses Clifton of indulging in a "vast" "conspiracy theory."

Searches on Clifton's last name at the Associated Press's national site and the New York Times each returned nothing relevant.

Here are key passages from Clifton's read-the-whole-thing column (internal link is in original; bolds are mine throughout this post): 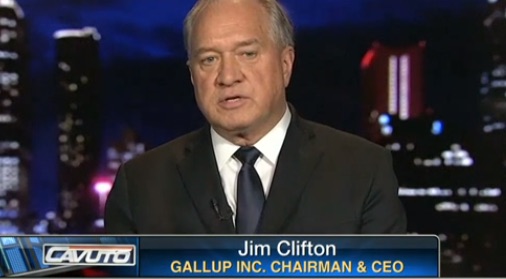 Here's something that many Americans -- including some of the smartest and most educated among us -- don't know: The official unemployment rate, as reported by the U.S. Department of Labor, is extremely misleading.

Right now, we're hearing much celebrating from the media, the White House and Wall Street about how unemployment is "down" to 5.6%. The cheerleading for this number is deafening. ...

... None of them will tell you this: If you, a family member or anyone is unemployed and has subsequently given up on finding a job -- if you are so hopelessly out of work that you've stopped looking over the past four weeks -- the Department of Labor doesn't count you as unemployed. That's right. While you are as unemployed as one can possibly be, and tragically may never find work again, you are not counted in the figure we see relentlessly in the news -- currently 5.6%. Right now, as many as 30 million Americans are either out of work or severely underemployed. Trust me, the vast majority of them aren't throwing parties to toast "falling" unemployment.

Say you're an out-of-work engineer or healthcare worker or construction worker or retail manager: If you perform a minimum of one hour of work in a week and are paid at least $20 -- maybe someone pays you to mow their lawn -- you're not officially counted as unemployed in the much-reported 5.6%. Few Americans know this.

Yet another figure of importance that doesn't get much press: those working part time but wanting full-time work. If you have a degree in chemistry or math and are working 10 hours part time because it is all you can find -- in other words, you are severely underemployed -- the government doesn't count you in the 5.6%. Few Americans know this.

There's no other way to say this. The official unemployment rate, which cruelly overlooks the suffering of the long-term and often permanently unemployed as well as the depressingly underemployed, amounts to a Big Lie.

... the great American dream is to have a good job, and in recent years, America has failed to deliver that dream more than it has at any time in recent memory. ...

... Gallup defines a good job as 30+ hours per week for an organization that provides a regular paycheck. Right now, the U.S. is delivering at a staggeringly low rate of 44%, which is the number of full-time jobs as a percent of the adult population, 18 years and older. We need that to be 50% and a bare minimum of 10 million new, good jobs to replenish America's middle class.

... When the media, talking heads, the White House and Wall Street start reporting the truth -- the percent of Americans in good jobs; jobs that are full time and real -- then we will quit wondering why Americans aren't "feeling" something that doesn't remotely reflect the reality in their lives.

Over at Fortune, Chris Matthews — not the far-left MSNBC host, but someone who appears to be auditioning for the role — tried to portray the CEO of the nation's premier pollster as a loon:

Is the unemployment rate really just a 'Big Lie'?

Jim Clifton, CEO of the polling service Gallup, wants to expose a conspiracy theory so vast that it will indict not just the government, but Wall Street and the media as well. These three entities have worked in concert to prop up the “Big Lie” that America’s unemployment rate is a mere 5.6%, as the Labor Department claims.

... a little explainer on why the official unemployment rate, also called U3, is compiled the way it is. The Labor Department releases six different measures of unemployment, using different assumptions for each one. The U1 rate, for instance, only counts people who have been unemployed for less than six weeks, while the broadest measure, U6, counts as unemployed folks who are working part time but wish to be working full time. It also marks people who don’t have a job but have looked for one in the past year (rather than four weeks as with U3) as unemployed. (This appears to be not true, as seen later — Ed.)

Why doesn’t the Labor Department just count all people without a job as unemployed? Because it wants to distinguish between the truly unemployed and those people who are, for instance, retired, or staying home to take care of the house or family while a spouse works. Counting these people as not part of the labor force is more accurate than saying that they are unemployed.

... We think ... (the current unemployment rate is) good because we lived through a period of 10% unemployment not that long ago. And by any measure, U6 or U3, the job market is better today than it was in 2009.

The primary question is whether the job market is better now than it was in 2007, not 2009. It's not, by miles — many more miles than the difference between today's official 5.6 percent rate and 2007's average of 4.6 percent would indicate.

Matthews never even tried to debunk Clifton's credible claim that there are "as many as" 30 million Americans who are either "out of work or severely unemployed." The current supposedly fully-loaded U6 rate of 11.2 percent (Table A-15 at link) means that the government considers only about 17.5 million Americans (11.2 percent times the civilian workforce of 156.129 million seen at Table A-1) unemployed or underemployed.

Additionally, there is reason to believe that the problem goes beyond what Clifton alleges, as I indicated in an October column at another web site.

It doesn't require much of a "conspiracy," Chris. All that's needed is a willingness on the part of the government's Bureau of Labor Statistics — now being run by someone with "demonstrated 'ties to a left-wing organization with communist roots and ... radical views against small businesses'" — to subtly tweak how it compiles its data, and an unwillingness on the part of those who see the numbers to question their credibility:

Of all the key figures BLS presents, the unemployment rate is probably the one which can be most easily manipulated without leaving telltale tracks. The key lies in determining whether a person is considered to be looking for work.

Translating what my (Census Bureau) informant has told me into layman’s terms — while emphasizing that this person cannot specifically describe how the perceived rigging is occurring after surveyors electronically submit their data — it appears that taking what many people would see as an acceptable level of unsuccessful action to find work is no longer enough to place one into the ranks of the unemployed. The surveyed person apparently must have taken multiple specific steps during a given week to try to get a job. Surveyors believe that the bar to be considered actively looking for work has been artificially raised, and that many people who are somewhat diligently but not constantly seeking employment are not being classified as unemployed, and are therefore not even considered members of the civilian workforce.

From here, it seems that this manipulation could be perpetrated with relatively minor computer programming changes. The IT people involved in implementing these changes would likely not grasp their significance unless they happened to be very well versed in the bureau’s detailed survey compilation procedures and rules.

Even with minor changes, the unemployment rate can change significantly. If only two million of the record 92.6 million Americans classified as not in the labor force (that figure was 92.9 million in December — Ed.) really should be considered workforce members and therefore unemployed under consistently applied rules, the official unemployment rate would be more than a full percentage point higher.

Clifton is contending that perhaps six times as many Americans (his 30 million is 12.5 million higher than BLS's official 17.5 million) should be considered part of the labor force, and therefore reported as unemployed — at the very least in the U6 sense (which would raise that rate to 17.8 percent), with many of them, probably beyond my 2 million lowball example, also included in the official U3 rate.

Clifton's "Big Lie" contention revolves around the press's near-complete refusal — there are rare exceptions, but they don't get wide circulation — to dig beneath the surface of the official unemployment rate or to question the nature of the jobs the economy is generating. Thus, President Obama now laughably claims that he "saved the economy," and that the economy is now so great that the federal government can once again turn on the federal spending spigots without negative consequences.

The current press treatment is in stark contrast to the historically proven false "hamburger flipper" claims the press and the left (but I repeat myself) made with absolutely no supporting evidence during the Reagan administration's boom years. As to Wall Street, longtime observers are finally acknowledging that the stock market's fortunes are entirely in the hands of the Federal Reserve — "Any metric you followed 20 years ago doesn’t matter, because you’re dealing with massive central bank manipulation and accommodation in an attempt to keep everything steady."

Any truth to the allegations of BLS data manipulation I have reported would confirm that it's not just a big lie as Clifton described it. It would then also be a carefully orchestrated one.