What everyone knew would happen as a result of Philadelphia's 1.5 cents-per-ounce soda tax began materializing on Wednesday, as Pepsi announced that it would lay off roughly 20 percent of its workforce there over the next several months. Coverage at both Philly.com and Associated Press allowed the city to engage in fantasy by claiming without meaningful challenge, or even clarification, that Pepsi in particular, but clearly other beverage makers by implication, should be using profits earned elsewhere to subsidize their Philly operations.

Philly.com, the web site of the Philadelphia Inquirer, carried the news, and the city's incredible cop-out (bolds are mine throughout this post):

With sales slumping because of the new Philadelphia sweetened beverage tax, Pepsi said Wednesday that it will lay off 80 to 100 workers at three distribution plants that serve the city.

The company, which employs 423 people in the city, sent out notices Wednesday and said the layoffs would be spread over the next few months. The layoffs come in response to the beverage tax, which has cut sales by 40 percent in the city, PepsiCo Inc. spokesman Dave DeCecco said.

... The Kenney administration lambasted the news, pointing to Pepsi's overall profits and the benefits of the expanded pre-K program that the 1.5-cent-per-ounce tax funds. As of this week, the program has created 251 jobs in the city, mostly full-time pre-K teaching positions, the city said. 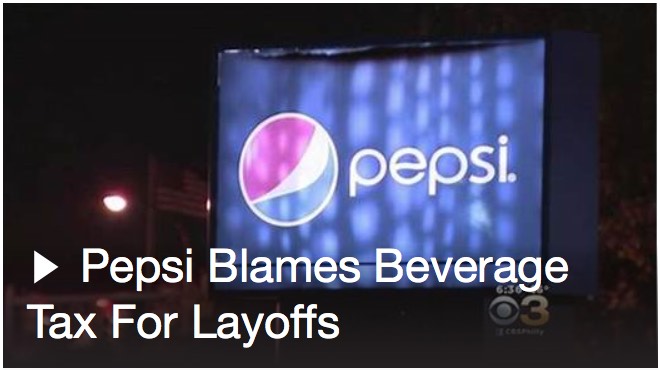 “The soda industry sunk to a new low today,” city spokeswoman Lauren Hitt said. “They are literally holding hostage the jobs of hard-working people in their battle to overturn the tax. Pepsi reported nearly $35 billion in gross income and $6 billion in profit last year.... The idea that they can afford to do that but ‘must lay off workers’ should make every Philadelphian very skeptical of whether these layoffs are actually due to the tax.”

The layoffs will occur at plants in North Philadelphia, South Philadelphia, and Wilmington. The plants are run as independent businesses required to report profits and losses to the company.

It's probably clear to most readers here, but Inquirer reporter Julia Terruso really should have told her story's readers, many of whom are unfamiliar with corporate financials, that Pepsi's worldwide profits last year were $6 billion.

This is important, because what Ms. Hitt and the administration of Mayor Jim Kenney are really saying is that the city and its beverage industry are entitled to be subsidized by the rest of Pepsi's operations on planet earth.

The trouble is, in the real world where businesses need to make a sufficient level of profit to justify owners' and shareholders' investments, companies can't afford to carry money-losing operations. They must, as Terruso noted, treat each discrete operation as if it's an "independent business" which has to justify itself. In Pepsi's situation, it may also be the case, as in many parts of the country and the world, that Philly's local bottlers are truly separate business entities whose owners and employees are now suffering terribly, and who know that they cannot expect a bailout from Pepsi itself. (Dave DeCecco, the Pepsi spokesman quoted, is at corporate headquarters in Purchase, New York, but the local bottler or bottlers may have agreed to have corporate speak for them in soda tax-related matters.)

If Pepsi were foolish enough to do what the city wants it to do, it would have to raise prices a bit in every other locality and country around the world to cover its Philly losses. If this practice continued even as more money-grubbing jurisdictions enact soda taxes, its products would become uncompetitive in places where the tax isn't levied compared to other makers not interested in bailing out profligate government entities enacting such a tax. This would be a surefire formula for corporate doom.

The Associated Press's unbylined story on the layoffs also allowed the city's de facto plea for a subsidy to go unchallenged, and noted that more layoffs are coming at other affected entities:

Some Philadelphia supermarkets and beverage distributors have also said they're gearing up for layoffs.

Philadelphia Mayor Jim Kenney said the tax, which was aimed at paying for nearly 2,000 pre-kindergarten slots and other programs, raised $5.7 million in January, more than double what city officials had projected. The city also said Wednesday that its pre-K program has created about 250 jobs, through expanded teacher opportunities and support staff.

It's a virtual certainty that tax-driven layoffs will exceed the 250 jobs created in the pre-K program.

Apparently no reporter is interested in asking Mayor Kenney the bottom-line question: How do you justify expecting beverage companies and ultimately beverage drinkers in the rest of the world to pay for your city's precious pre-K program?