On Christmas evening, appearing in print on Sunday, December 26, Jeremy Peters at the New York Times pretended that the term "fake news" has only gained common currency very recently during the social media era. He also effectively contended that the establishment press holds ownership rights over the term, claiming that "conservative cable and radio personalities, top Republicans and even Mr. (Donald) Trump himself ... have appropriated" it.

Peters, who graduated from the University of Michigan in 2002 and arguably knows better, could not be more wrong. Center-right media critics, pundits and personalities have used the term "fake news" to describe establishment press reporting for at least a decade, usually with total justification. It's the press which is "appropriating" the "fake news" term in the name of marginalizing and silencing non-"mainstream" news sources.

Here is the relevant text from Peters' Christmas whine (bolds are mine throughout this post):

... Rush Limbaugh has diagnosed a more fundamental problem. “The fake news is the everyday news” in the mainstream media, he said on his radio show recently. “They just make it up.”

Some supporters of President-elect Donald J. Trump have also taken up the call. As reporters were walking out of a Trump rally this month in Orlando, Fla., a man heckled them with shouts of “Fake news!”

Until now, that term had been widely understood to refer to fabricated news accounts that are meant to spread virally online. But conservative cable and radio personalities, top Republicans and even Mr. Trump himself, incredulous about suggestions that fake stories may have helped swing the election, have appropriated the term and turned it against any news they see as hostile to their agenda.

In defining “fake news” so broadly and seeking to dilute its meaning, they are capitalizing on the declining credibility of all purveyors of information, one product of the country’s increasing political polarization. And conservatives, seeing an opening to undermine the mainstream media, a longtime foe, are more than happy to dig the hole deeper.

Peters' "until now" contention in the first bolded item above is utterly false.

NewsBusters has had a "Fake News" tag virtually since its inception. It has been used over 320 times in the past 10-plus years. That total certainly does not represent all of the times NB authors could justifiably have used the tag, but didn't, as they demonstrated the faked nature of media reports.

Both the tag and the general use of the term by the public gained common currency as a result of serially dishonest reporting from the Middle East and during the Iraq War in the middle of last decade. The use of the term subsided somewhat after that, but never completely went away.

Here are some of those "Fake News" entries. Links are often to just one of many related entries.

"Fauxtography" — In 2006, Reuters was caught publishing and had to pull crudely doctored photos provided by a Lebanese freelance photographer clearly driven by an anti-Israel agenda. Bloggers detected the photoshopping, or the photos would likely still be out there.

Staged photos from the Middle East — In just one instance of so very many (with capitalization and spelling errors corrected), a Western reporter wrote, in part:

I have been witness to the daily practice of directed shots, one case where a group of wire photogs were choreographing the unearthing of bodies, directing emergency workers here and there, asking them to position bodies just so, even remove bodies that have already been put in graves so that they can photograph them in peoples arms. These photographers (are engaging in) manipulation on a human level, and this itself is a bigger ethical problem.

"Fake News and Its Implications" — There's an August 2006 entry specifically devoted to "fake news" which notes that "fake news is more common than previously supposed," and that its ability to be detected had improved because "people can examine the evidence and compare notes." The purveyors of the "fake news" were the very "Big Media outfits" which have decided they should have the right to regulate "fake news" on social media a decade later.

More Staged Photography, Child Endangerment Division — There's a September 2006 entry noting how "bloggers caught the BBC flat-out admitting its complicity in a staged photo shoot with a Lebanese boy posing next to what the broadcast said was an 'Israeli bomb lying unexploded' in someone's living room."

"What the Puck?" — Not the most important event ever, but very illustrative. If a reporter can't even cover an event as an eyewitness without making things up that didn't happen, we've truly entered the realm of "fake news." In this instance in October 2008, covering a hockey game, a New York Times reporter "exaggerated the boos by the crowd, attacked Flyers owner Ed Snider for inviting (Sarah) Palin to the event and appears to have fabricated the discomfort felt by NHL players Scott Gomez and Mike Richards." The Times "took the unusual step of quickly editing and replacing a hysterical post by hockey blogger Lynn Zinser."

Blatantly wrong jobs reporting — In June 2009, a "Green Jobs" report published by Pew Research relayed by the Associated Press and other outlets claimed that so-called "green jobs" had grown at a rate nearly triple that of all other jobs from 1998 to 2007. The truth is that growth in those jobs of 9.1 percent was actually less than overall private-sector job growth of 10.7 percent. Neither Pew nor AP ever corrected their "fake news."

Faked Cause of Death — In November 2012, CNN published a report purportedly telling the tale of a child allegedly killed in Gaza by an Israeli-fired rocket. The fact is that Hamas was caught "using a child likely killed by its own rocket fire and claiming that an Israeli attack was responsible." Shortly after the broadcast, several sources, including the Palestinian Center for Human Rights, reported that "the child was, in fact, killed by a Hamas rocket, not Israel." This occurred because Hamas, with minimal attention to safety or guidance accuracy, "deliberately fires rockets from civilian areas and hides its weapons caches in mosques and homes." 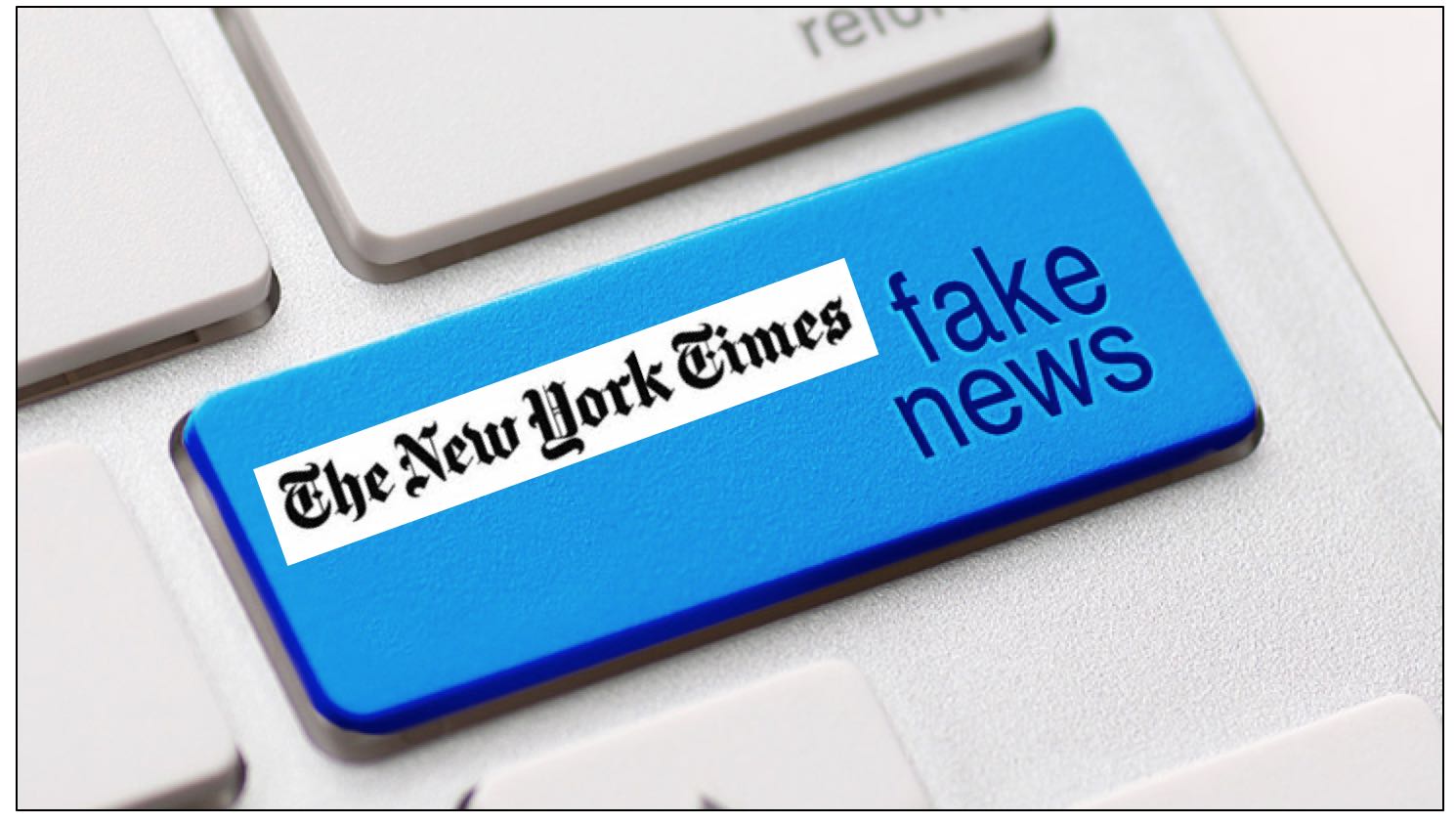 "Fake News," Recycled a Decade Later — In the fall of 2015, Jeremy Peters' bosses at the Times devoted an inordinate amount of attention to the movie Truth, an enterprise which tried and failed to resurrect the long-lost integrity of former CBS News anchor Dan Rather. Rather attempted to smear President George W. Bush in September 2004 over the incumbent's Texas Air National Guard service. That effort collapsed when the core documents involved which supposedly supported Rather's points were proven to have been computer-generated using software that did not exist when Bush served in the 1970s. In other words, they were blatantly obvious forgeries. The Times originally heavily invested itself, and apparently remains heavily invested, in this obvious "fake news" story. When the jig was up, the Times tried, and apparently still is trying, to pretend that the documents were "fake but accurate."

Here are three other NewsBusters items from yours truly out of so many which could have garnered the "Fake News" tag, but to which it was not applied.

Gore really beat Bush? — In August, breathing life into a "fake news" meme which we thought had died in the early 2000s, an Associated Press reporter claimed that "when Democrat Al Gore lost to George W. Bush (in 2000) ... several post-mortem reviews concluded that had the undervotes been counted, Gore would have won." Sorry, AP: There is "no credible, comprehensive 'undervote' scenario under which Gore would have won."

"Fox Makes Money Off the Tax System" — In 2011, former New York Times reporter David Cay Johnston, in his first submission to Reuters, hysterically "believed that he, unique among all human beings on earth, had found that Rupert Murdoch's News Corp., while earning billions, was not only not paying income taxes, but somehow 'making money off the tax system.'" Only deeply-ingrained, seething hostility could explain how an experienced business reporter could actually believe that this nonsense, i.e., "fake news," could be true. Reuters quickly pulled the item.

So, in case it's not yet clear to Jeremy Peters and the rest of the establishment press: