The day after the 2016 election, Rolling Stone publisher Jann Wenner met with President Barack Obama. The primary takeaway from that interview, published in late November, was, as Tim Graham at NewsBusters noted, how Obama partly blamed Hillary Clinton's election loss to Donald Trump on “Fox News in every bar and restaurant in big chunks of the country.”

Additionally, Wenner, in what seemed at the time to be a crybaby throwaway line, suggested that "the news business and the newspaper industry, which is being destroyed by Facebook, needs a subsidy so we can maintain a free press." Unfortunately, New York Times President and CEO Mark Thompson shares both Wenner's lament and his suggested remedy. Thursday, establishment press pressure on Facebook brought about potentially ugly results.

Apparently feeling the heat, Facebook responded on Thursday by announcing that it will use left-biased "fact-checkers" to "combat and bury 'fake news.'" Although it remains reasonable to be concerned that this effort could serve to marginalize and eliminate some of the left-biased establishment press's competition, Facebook CEO Mark Zuckerberg has assured the Media Research Center's Brent Bozell "that his express aim is to eliminate only patently false news stories from Facebook."

Thompson's plea for relief came in a speech he delivered at the Detroit Economic Club on Monday entitled — seriously — "A Speech on Fake News":

... a myriad of sites, political interest groups and individual cranks ... spread the frankly bizarre – and of course entirely unevidenced – conjecture that there is a subterranean child-abuse conspiracy between Democratic high-ups and specific pizza parlours, including the Comet Ping Pong pizzeria in northwest DC.

... As many of you will know, the incident quickly led to the brisk departure of Michael G. Flynn, the son of Donald Trump’s pick for National Security Advisor, from the transition team. Flynn the younger had tweeted this about Pizzagate: “Until Pizzagate proven to be false, it’ll remain a story.”

Until something is proven to be false, it’ll remain a story. Any clever lie or crackpot conspiracy theory will have a currency until it is debunked. And of course the more outlandish the theory, the harder it is to put to rest – thus the longevity of the Obama Birther myth. In one pithy sentence, Michael G. Flynn has offered us a doctrine of fake news, or perhaps more precisely a doctrine of the political value of fake news.

I must note that the only person who has systematically debunked one of the key elements of the Pizzagate claims, as opposed to simply wringing their hands, runs an outlet which the Times and the rest of the establishment press consider a prime example of "fake news." 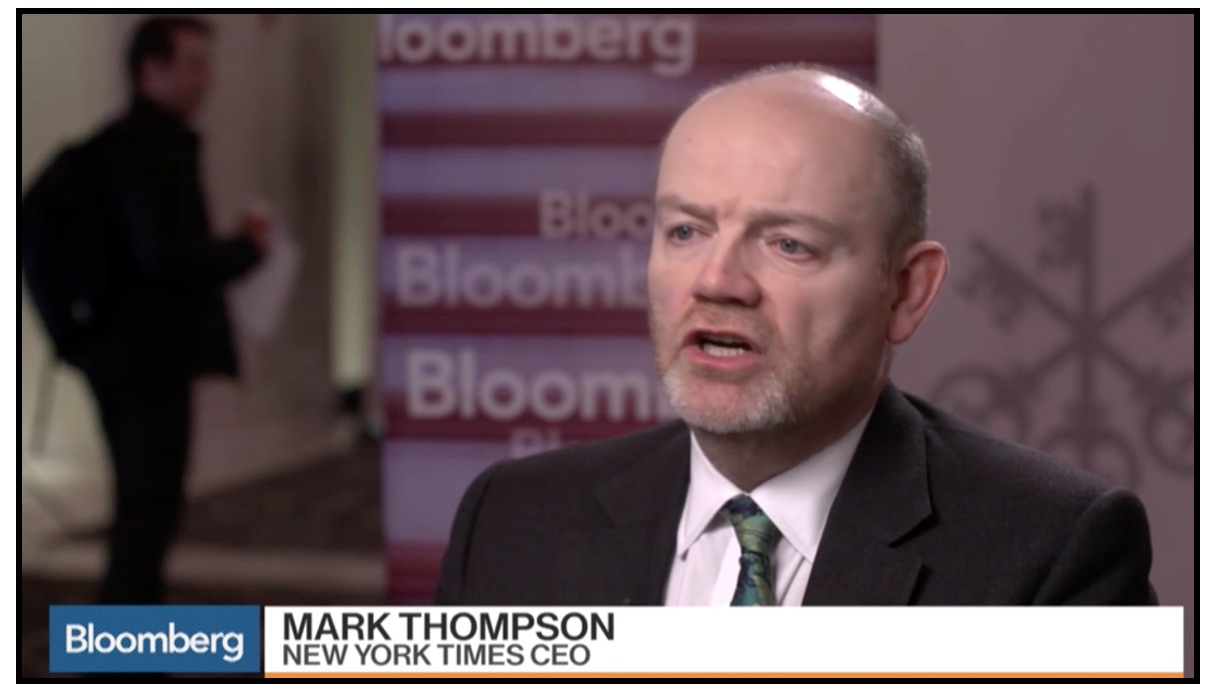 Meanwhile, it's not unreasonable to question how Mark Thompson can be an authority on the legitimacy of child-abuse scandals, given that one continued to occur right under his nose at the BBC when he was in charge there from 2004 to 2012. The author of a controversial inquiry into the handling of that scandal believes that, in the words of the UK Telegraph, Thompson "lied when giving evidence."

Thompson surely lacks a sense of irony, given how much "fake news" his own paper has peddled lo these many years. Here are just a very few out of so many:

Concerning the final item, and going beyond Thompson's point that "Until something is proven to be false, it’ll remain a story," Wikipedia's related entry on Gary Sick notes that "the Times article immediately elevated the story to national prominence," but does not note that the Sick's claim has been completely discredited.

The fact is that in 1993, a year when Democrats controlled Congress, "an exhaustive House report ... categorically disproved it." But thanks to the Times, even something which has been proven false remains a story, and a virtual article of faith among many on the left. In other words, the Times's publication of obviously fake news has made it real — accomplishing a quarter-century ago exactly what Thompson worries that today's "fake news" purveyors are doing today.

A search at NewsBusters on the New York Times tag during its 11 years of chronicling liberal media bias and falsehoods will turn up more examples of fake news and fake claims than anyone can hope to compile in a single post. One recent example: A December 2 Times story falsely claimed that no soldiers died searching for Bowe Bergdahl, the soldier who deserted his post in Afghanistan in 2009.

Times CEO Thompson then took a dive into the establishment press's latest and perhaps most strident ever fake news campaign:

... our digital eco-system seems to have evolved into a near-perfect environment for fake news to thrive. In addition to enthusiastic domestic myth-makers, it’s easy for hostile foreign governments and their proxies not just to initiate a fake news cycle – it is now widely accepted that it was Russian hackers who broke into John Podesta’s emails and gave them to Wikileaks ...

No, Mark, it's not "widely accepted." It's only "widely reported" by the very outlets which, while obsessively decrying "fake news," have spent the past six days relentlessly peddling the equivalent of what Thompson correctly called Pizzagate — i.e., "a conspiracy theory" — that Russia, and not the votes of the American people in the various states, caused Donald Trump's election.

Craig Murray, a former British ambassador to Uzbekistan and associate of Wikileaks proprietor Julian Assange, says it wasn't Russia. Assange himself has been saying the same thing for five months up to and including Thursday on Sean Hannity's radio show.

Earlier this week, the international wire service Reuters reported that "The overseers of the U.S. intelligence community have not embraced a CIA assessment that Russian cyber attacks were aimed at helping Republican President-elect Donald Trump win the 2016 election."

So much for that "wide acceptance."

The central point I made in a Tuesday post which noted that the Times, on November 25, relayed an official claim made by the Obama administration that the most recent elections in the U.S. were "free and fair" — correctly interpreted by a Times reporter as incorporating concerns about the possible effects of the DNC and John Podesta leaks — still stands:

... even if the Russians did try to swing the election in Donald Trump's favor (which has not been demonstrated), (that attempt) would still have no impact, because the administration has already concluded that the "election results ... accurately reflect the will of the American people," incorporated concerns about those hacks in making that determination, and has not walked it back.

Now let's get to Thompson's plea for financial relief, while speciously claiming that the Times doesn't need it:

... we also know that many other American news publishers – who do not have the national and international opportunity of The Times, or our successful digital subscription model – are having a much harder time. Their ability to deliver real news – about city hall and the state legislature, about local schools and businesses, as well as about America and the world – is under direct economic threat.

Here too I believe that the search and social media platforms could play a role. The advertising which once paid for professional journalism across this country and the rest of the western world is now migrating to them. Far from helping, if anything initiatives like Facebook Instant Articles, which host news stories natively, seem to make it even hard(er) for responsible publishers to get their business models to work.

In all but a handful of cases like The Times with large audiences, deep engagement and real subscription potential, it’s easier today to make a profit on search and social from fake news than it is from the real thing. Where will that take us if uncorrected? The big search and social companies must do more to sustain the economics of real journalism.

That's just a more polite way of saying exactly what Jann Wenner, whose magazine published the completely fake "Jackie" story about "A Rape on Campus" said, as noted in this post's second paragraph.

The arrogant, self-congratulatory premise behind this demand for social media support is that outfits like Rolling Stone and the Times deliver "real journalism," and that so many other outlets fail to do so.

That should be seen as a sick joke, but Facebook is taking the "fake news" charges seriously, if not yet directly financially. Its "remedy," despite the assurances noted earlier, has the potential to become far worse than the vague disease it thinks it is treating:

Facebook is going to start fact-checking, labeling, and burying fake news and hoaxes in its News Feed, the company said Thursday.

The decision comes after Facebook received heated criticism for its role in spreading a deluge of political misinformation during the US presidential election, like one story that falsely said the Pope had endorsed Donald Trump.

To combat fake news, Facebook has teamed up with a shortlist of media organizations, including Snopes and ABC News, that are part of an international fact-checking network led by Poynter, a nonprofit school for journalism in St. Petersburg, Florida.

... Of the 42 news organizations that have committed to Poynter's fact-checking code of ethics, Facebook is starting out with the following four: Snopes, Factcheck.org, ABC News, and PolitiFact.

The Associated Press will also be a fact-checking partner.

The organizations identified all lean left, and all have been demonstrated in previous NewsBusters posts to "fact check" with a decidedly leftist bias in both selection and application, with a decidedly stubborn refusal to admit when they are in error. Katrina Trinko at the Daily Signal cited several such examples on Thursday.

Given their track record, a "trust but verify" posture is definitely in order.