NY Times Op-Ed Howler: 'The Path to Prosperity Is Blue'

In a New York Times op-ed with so many holes it wouldn't hold up as Swiss cheese, two political science profs, Jacob S. Hacker and Paul Pierson, set out to reassure the leftist elites that "The Path to Prosperity Is Blue."

This would be pretty funny if it weren't for the fact that many of the Old Gray Lady's smug readers will actually buy this nonsense. The pair's presentation tortures economic and other statistics so badly that they make getting waterboarded look like a walk in Central Park.

Their fantasy starts with an arbitrary classification of "red" and "blue" states. It's based solely on statewide results of the past four presidential elections. States which gave their electoral votes to Democrats in all four elections are "deep blue," while states which went Republican all four times are "deep red," with "lean blue," "purple," and "lean red" in between.

Thus, to name just a few examples, New Jersey is a deep blue state despite having had a Republican governor for the past seven years (as of the end of this year); Wisconsin and Michigan, with Republican governors and legislatures for the past six, are deep blue (that would certainly be news to Governor Scott Walker, one of the left's most despised targets); and Missouri is deep red despite having a Democrat as governor for the past eight.

The state red-blue classifications are bad enough, but of the five metrics chosen, which appear to have been cherry-picked to generate the desired results, only one correlates particularly well with economic "prosperity" as normal humans understand it. Completely absent are metrics related to job growth, unemployment, welfare system dependency, state GDP growth or after-tax income. Instead, the authors chose the following measures:

Powerline's Hinderaker asserts that "the piece’s logic is laughable." He's being too kind, as a wade into the authors' pathetic, obviously partisan narrative will demonstrate:

Red states dominated by Republicans embrace cut and extract (i.e., cutting taxes and extracting natural resources — Ed.). Blue states dominated by Democrats do much more to maintain their investments in education, infrastructure, urban quality of life and human services — investments typically financed through more progressive state and local taxes. And despite what you may have heard, blue states are generally doing better. (Aside: "Quality of life"? Many blue-model cities are cesspools of crime. Perhaps these profs didn't notice because they don't have to live with the results of their favorite politicians' handiwork. — Ed.)

... blue states are substantially richer (even adjusting for cost of living) and their residents are better educated. Companies there do more research and development and produce more patents. Students score better on tests of basic science-oriented skills like math.

How can conservative commentators claim that red states dominate? A tactic favored by Mr. Trump’s economic adviser Stephen Moore is to rely on measures goosed by population expansion, like job growth or a state economy’s size. 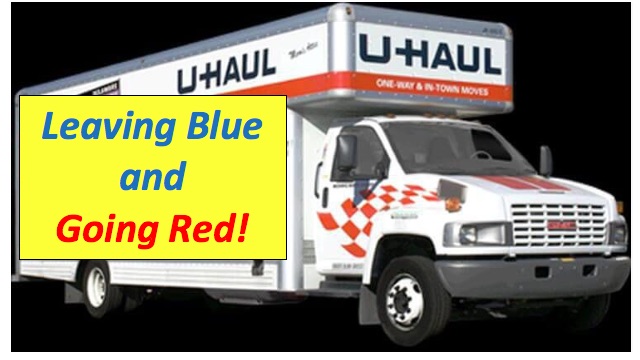 Guys, if your beloved blue states were such wonderfully prosperous places, people and companies would be flocking to them. Instead, genuinely deep-red states like Texas and Florida have seen their populations grow, and have achieved impressive job and state GDP growth, in no small part because companies and people are fleeing the supposedly superior blue states for genuinely better economic climates.

... Many of these (red-blue) differences are longstanding. Our reddest region, the South, has long been the poorest part, too. The gap between today’s red and blue states was enormous for much of the 20th century. It then narrowed substantially, thanks in part to huge federal transfers to the poorest states to raise them toward the national level.

Yet income differences between red and blue states stopped closing around 1980 and, in some revealing cases, widened. For example, Texas and Massachusetts — often considered exemplars of the red and blue models — had almost converged by 1980. Since then, Texas’ per capita income has fallen significantly relative to Massachusetts’. The same is true of Utah.

The rubbish here is deep.

I'm sure everyone in the south will be more than a little surprised to learn that their states' relative success compared to blue-model northern states is "in part" due to "huge federal transfers." Since World War II, what have these "huge transfers" been? (And if you guys say it's "oil industry tax subsidies," we're sending you into the corner to wear dunce caps until further notice. The oil industry pays more than its fair share in taxes at all levels.)

As to Texas's relatively low per capita income, illegal immigration, something the left is determined to maximize, regardless of the social and economic costs, has had a lot to do with that.

The pair also seems unwilling to consider that red-model states would be prospering even more if it weren't for the federal government's war on fossil fuel-based energy. Among other things, this war has quickly turned West Virginia, a relatively poor state thanks to decades of deep blue-model governance, into a deep red one.

Now let's go after the pair's criticism of "cut and extract."

Ronald Reagan's tax cuts of the 1980s created the conditions for the explosive growth in venture capital and the technological and other innovation it funded. Without those cuts, we would have seen a continuation of the Carter-era malaise. We're also seeing a replay of the late-1970s (or worse) in the national, relatively high-tax Obama economy: a slowdown in new business formation, a reluctance on the part of new businesses to grow beyond the garage stage, and historically weak economic performance.

As to "extract," ask the people of upstate New York, where Governor Andrew Cuomo has singlehandedly prevented fracking, how hostility towards resource extraction has helped them. More broadly, economic prosperity has historically been correlated with increased use of fossil fuels. There's no reason, despite the hype over obscenely expensive "renewables," to believe that's going to change any time soon.

The pair come off as sore losers who can't stand the idea that people are leaving their liberal paradises. The fact is that without the relatively stellar performances of red-model vs. blue-model states during the Obama era, job and GDP statistics — and yes, those are the broad economic measurements which really matter — would be far more mediocre than they have been.