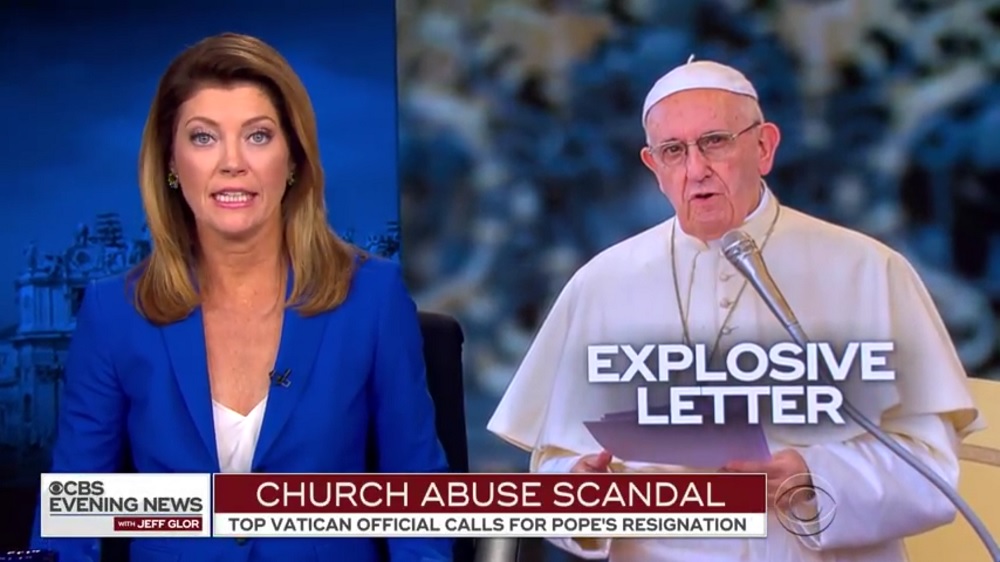 The Associated Press and the New York Times both tried to spin a Catholic archbishop's recent exposé about the Church's sex abuse scandal as an ideological attack on Pope Francis from the right.

Winfield zeroed in on Italian journalist Marco Tosatti in her Tuesday report. She explained that "Vigano's document alleges that Francis knew of ex-Cardinal Theodore McCarrick's sexual misconduct starting in 2013 but rehabilitated him from sanctions that Pope Benedict XVI had imposed." The correspondent also noted that Tosatti "helped Archbishop Carlo Maria Vigano write, rewrite and edit his 11-page testimony." She quickly added that the archbishop's collaborator is a "leading conservative critic of Francis."

The AP religion journalist, whose has a record of liberal bias when reporting on the Catholic Church, soon emphasized this ideological label by disclosing that "Tosatti...writes largely for more conservative blogs." She used a superlative version of the term after devoting several paragraph's to detailing the circumstances of the archbishop's document: "Tosatti...set out to find publications willing to publish it in its entirety: the small Italian daily La Verita, the English-language National Catholic Register and LifeSiteNews, and the Spanish online site InfoVaticana. All are ultra-conservative media that have been highly critical of Francis' mercy-over-morals papacy."

The "ultra-conservative" descriptor also turned up in the Monday article from the Times. Correspondents Elizabeth Dias and Laurie Goodstein first trumpeted that "American Catholic leaders are in open conflict over the explosive allegations from a former Vatican diplomat that Pope Francis knew about, and ignored, accusations of sexual abuse against" Cardinal McCarrick. They soon pointed out that "Cardinal Raymond Burke, the ultraconservative former archbishop of St. Louis who is now based in Rome, said that after the truth of Archbishop Viganò’s accusations is established, “then the appropriate sanctions must be applied."

Dias and Goodstein revealed that Archbishop Vigano had "privately shared his plan to speak out with an influential American friend: Timothy Busch, a wealthy, conservative Catholic lawyer on the board of governors of the media network in which Archbishop Viganò ultimately revealed his letter." Busch disclosed in an interview with the Times that "he did not know in advance that the archbishop would choose to publish his attack in the National Catholic Register, which is owned by the Eternal Word Television Network, where Mr. Busch is on the board of governors."

The pair later outlined that "Archbishop Viganò’s extraordinary 11-page letter...has brought simmering ideological differences among American Catholics out into the open. Divisions in the church are quickly coming to a head, with many conservatives lining up to defend Archbishop Viganò and progressives rallying around Pope Francis." Despite using this "progressive" term three times in their article, they would not apply the label to a specific person, despite the fact that they had interviewed such individuals. One of these was Father James Martin, whom they merely identified as "a Jesuit leader and editor at large of America Magazine." Fr. Martin, who has ripped supposed "homophobia" inside the Church, lashed out at Pope Francis' critics: "Unfortunately some Catholics are using the suffering of children to advance some of their own ecclesial agendas, such as attacking Francis."

Dias and Goodstein also included a bizarre summary about opposition to the pontiff in the United States: "Conservative American Catholics have been among the most vocal opponents of Francis' agenda...They have resisted his efforts to bring back into the fold those Catholics who have fallen away from the church because they are divorced and remarried, or are gay or lesbian, or are secular nonbelievers. They have also been opposed to Francis' political priorities of protecting immigrants and refugees, questioning corporate capitalism and stemming climate change."

It should be pointed out that Bishop Robert Morlino of the Diocese of Madison, Wisconsin predicted that major media outlets, such as AP and the Times, would release slanted reporting on Vigano's document. Bishop Morlino was among the "conservative American bishops swiftly came to Archbishop Viganò’s defense," as the newspaper put it.

In a Monday statement, the Wisconsin cleric lamented that "the Holy Father chose a course of 'no comment,' regarding any conclusions that might be drawn from Archbishop Viganò’s allegations. Pope Francis further said expressly that such conclusions should be left to the 'professional maturity' of journalists. In the United States and elsewhere, in fact, very little is more questionable than the professional maturity of journalists. The bias in the mainstream media could not be clearer and is recognized almost universally."