USA Today played up the Supreme Court's decision on Monday to hear the case of a bakery owner in Colorado who refused to participate in same-sex couple's wedding ceremony by baking the pair a cake. The newspaper spun the judicial branch's move in the lead sentence of its Monday article: "The Supreme Court agreed Monday to reopen the national debate over same-sex marriage." The publication also forwarded this slanted interpretation in a Monday post on their Twitter account.

Correspondent Richard Wolf explained in his write-up, "Supreme Court will hear religious liberty challenge to gay weddings," that "the court will hear a challenge from a Colorado baker who had lost lower court battles over his refusal to create a wedding cake for a gay couple. Like a New Mexico photographer three years ago, the baker cited his religious beliefs." He continued with more pro-LGBT agenda bias: "The justices -- who upheld same-sex marriage nationwide in a landmark 2015 ruling -- apparently decided that despite state laws barring discrimination based on sexual orientation, the merchants' obligation to same-sex couples was not necessarily baked in the cake."

Wolf also spotlighted that "twenty-nine states have no such laws, so gays and lesbians freed to marry by the Supreme Court in 2015 still can face discrimination in employment, housing and public accommodations. A Kentucky appeals court recently upheld a printer's right to refuse to print shirts promoting a gay pride festival, reasoning that his actions did not discriminate against any individuals because of their sexual orientation." He added that "the key to the outcome of similar cases appears to hinge on whether states have laws barring discrimination against gays and lesbians, or whether they have laws protecting religious liberty. Colorado falls on one side of the ledger, Kentucky on the other."

This headline is highly misleading.....not about same sex marriage - about whether all must be forced to participate in it. Big difference

Highly irresponsible tweet/article. No one is debating whether gays can marry - the debate is whether Christians have to bake their cakes.

This isn't misleading. It's a lie. 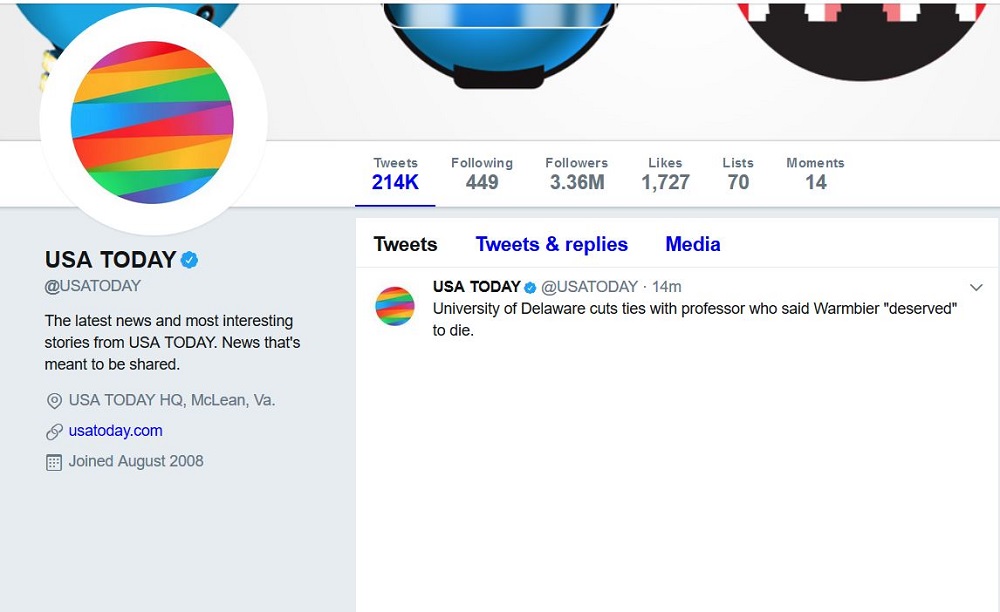 USA Today's Twitter account also re-Tweeted two posts by one of their interns, who revealed the newspaper's joint photo shoot with the pro-LGBT "No H8 Campaign."

Some faces from yesterday's D.C. @NOH8Campaign photoshoot for @USATODAY (1/2). pic.twitter.com/FPsZGUT5nZ

As they're getting their @NOH8Campaign pictures taken, Erica peels off her tape and surprises Ayla with a ring. @USATODAY pic.twitter.com/6De66fzLun