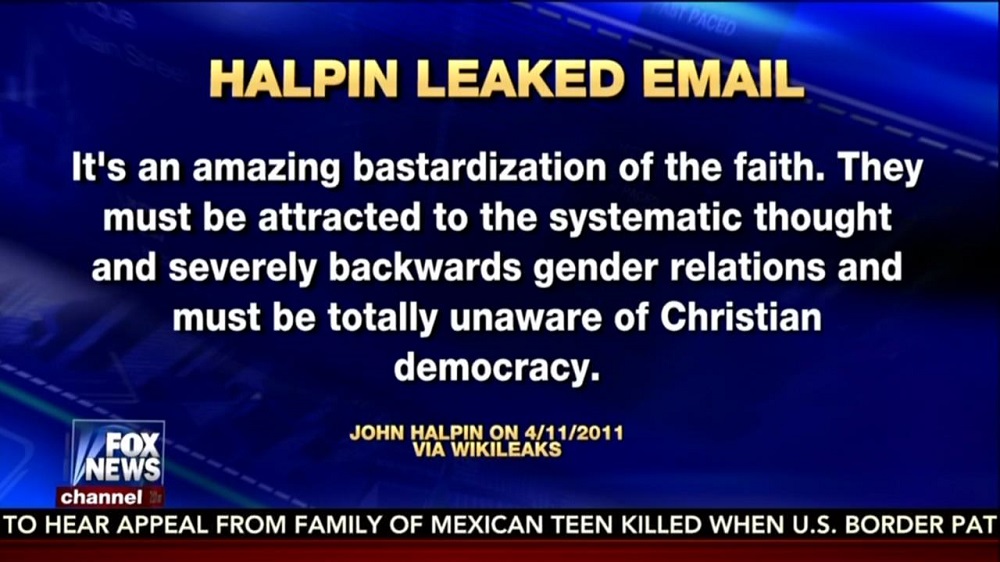 As of Wednesday morning, the Big Three networks' morning and evening newscasts have yet to cover the Tuesday revelation that the Clinton campaign's communications director — along with a close associate of the campaign's chairman, John Podesta — bashed Catholicism and evangelical Christianity in an e-mail conversation in 2011. The latter, John Halpin of the left-wing Center for American Progress, denounced the "severely backwards gender relations" inside the Catholic Church. The former, Jennifer Palmieri, replied with a negative remark about evangelicals.

Two cable news networks one-upped their broadcast competitors by devoting air time to the Halpin-Palmieri exchange. A panel on Tuesday's Anderson Cooper 360 on CNN discussed the e-mails for over two minutes. Fox News Channel's Kelly File actually led their Tuesday newscast with a three minute and 17-second report on how "key Hillary Clinton staffers [are] now taking heat over an e-mail exchange that lashes out at two major faith groups." [video below]

Anchor Megyn Kelly led into correspondent Trace Gallagher's report by reading excerpts from the conversation, which was published by Wikileaks: "At one point...Halpin writes his colleagues about conservatives and the Church, writing — quote, 'It's an amazing bastardization of the faith. They must be attracted to the systematic thought and severely backwards gender relations.' Clinton campaign manager John Podesta describes himself as a practicing Catholic. He does not respond directly to the conversation in the documents we have, but we're still waiting to hear the campaign's explanation for all of this."

It should be pointed out that on Wednesday morning, EWTN's Jason Calvi uncovered a February 2012 e-mail from Podesta himself where he bragged about how he, along with others, "created Catholics in Alliance for the Common Good to organize for a moment like this....Likewise Catholics United." Both groups purport to be Catholic, but have been criticized for their heterodox, pro-Democratic Party activism.

Gallagher gave additional details from the leaked 2011 e-mail thread during his report:

TRACE GALLAGHER: Megyn, the indication from these Catholic-bashing e-mails is that both Rupert Murdoch; and the managing editor of the Wall Street Journal, Robert Thompson, decided to raise their children Catholic — not because of their religious beliefs, but rather for social and political benefits. Mark Halpin writes (sic) — Robert Halpin writes — quote, 'It's an amazing bastardization of the faith. They must be attracted to the systematic thought and severely backwards gender relations and must be totally unaware of Christian democracy.' Top Clinton aide John Podesta; who, again, is Catholic; did not respond. Jen Palmieri did, writing — quote, 'I imagine they think it is the most socially acceptable politically conservative religion. Their rich friends wouldn't understand if they became evangelicals.'

Halpin writes back, quoting (sic), 'Excellent point. They can throw around 'Thomistic' thought and 'subsidiarity' and sound sophisticated because no one knows what the hell they're talking about.' 'Thomistic thought' is the philosophy of St. Thomas Aquinas; 'subsidiarity' [is] the belief that things are better handled at a local level, instead of a central government.

The Catholic League responded to the e-mails, saying — quote, 'These anti-Catholic remarks are bad enough, but it makes one wonder what else Clinton's chiefs, and others associated with the campaign, are saying about Catholics and Catholicism.'

On Anderson Cooper 360, Trump supporter and New York City councilman Joseph Borelli brought up the Halpin-Palmieri conversation, which sparked an argument between him and liberal pundit Paul Begala [video below]:

JOSEPH BORELLI, NEW YORK CITY COUNCIL MEMBER: There was a story that just broke while we were on the air today about a new leak about John Podesta and Jen Palmieri bashing Catholics — saying that Rupert Murdoch — couldn't believe that Rupert Murdoch baptized his children as Catholics. Seventy million Catholics in this country, 90 million evangelicals — I think that — saying that they bastardized their faith is going to help suppress the vote more than anything Donald Trump could do on his own.

BEGALA: They didn't say that — an outsider adviser did. First off, John and Jen are friends of mine, and they're very faithful Catholics. They were not trashing anything. There is — Joe, I presume you're a Catholic — there is a bit of a debate within the Catholic Church, as there is in America, between theological conservatives and theological liberals. Most churches have that. That's all that they were talking about. They were — believe me, they were not trashing the Holy Mother Church. There's no chance that John or Jen would ever do that.

BORELLI: They said, 'They must be attracted to the systematic thought and severely backwards gender relations, and must be totally unaware of Christian democracy.' It's amazing that they — 'it's an amazing bastardization of the faith.' That's — I think that's bashing Catholics. I don't know how you don't see that as bashing Catholics. I think 70 million Catholics, 90 million evangelicals would probably agree with me that that's a pretty bad statement about them—

BEGALA: First off, evangelicals and Catholics are very different creatures—

BORELLI: The e-mail goes on to say something about evangelicals, so—

BEGALA: They are faithful Catholics themselves. Within the Church, there are debates that go on. An outside adviser wrote in, saying, hey, this is what the conservative Catholics — these particular people, who are pretty famous people — this is what they think, and they had their own private conversation about it.

What we have not talked enough about, though, is that this was a theft. This was a break-in—

BEGALA: Excuse me — by, our intelligence agencies believe — by the Russians. On July 27, Donald Trump stood up on national television, and he called on the Russians to hack Americans. He invited cyber-crime—

QUINN: This is why the Clinton campaign (unintelligible)—

BEGALA: Excuse me. No, it is a crime. In private, people say all kinds of things — including things about theology. They do — they talk about religion, they talk about politics, they talk about family — right? You say a lot of things in a private e-mail. This particular one I happened to read because I'm a faithful Catholic, and I care deeply about my church and my faith — and those two are good friends of mine, and brother and sister in faith. So it's particularly upsetting to me for somebody to suggest that, somehow, they're attacking the Church — because they were not.