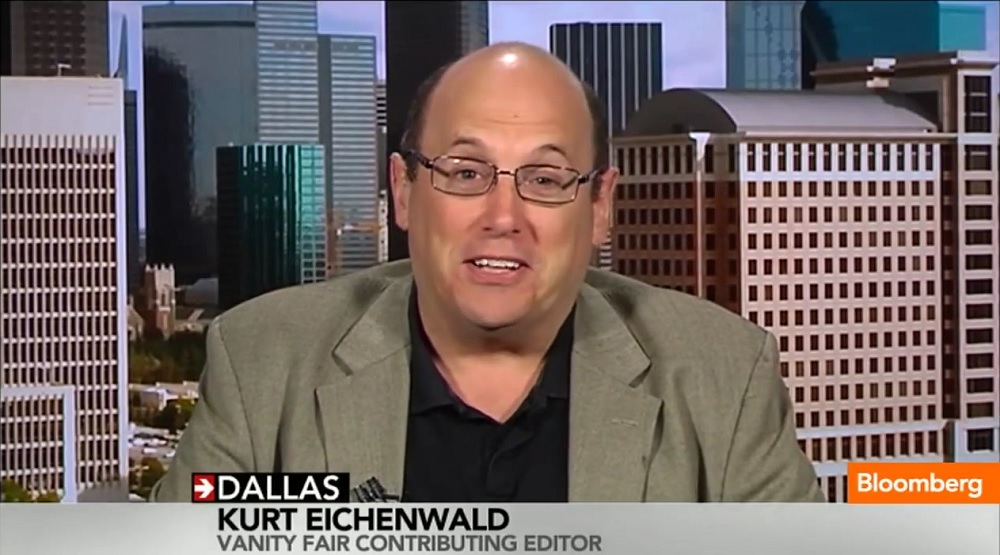 Kurt Eichenwald deemed himself an authority on the Bible and Christianity in a Monday item for Newsweek, as he lectured Mississippi Christians on their new religious liberty law. Eichenwald blasted the "the rogues' parade of Bible-thumpers who know nothing about what the Bible actually says" in the state, and contended that orthodox Christian theologians had gotten it wrong about sexuality and marriage for nearly 2,000 years: "They don't want to know what the Bible actually says about gay people because it might force them to examine their own behavior, rather than castigating someone else's."

The former New York Times investigative reporter immediately went on the offensive in his article (which carried the grammatically-incorrect title, "New Anti-Gay Law Proves Mississippi Don't Know How to Read (the Bible)" (see screen cap below): "Christian politicians and their supporters—many of whom seem to know more about the Kardashians than their faith—have recently been engaged in some of the most embarrassing and anti-Christian behavior in years." He continued with his "rogues' parade of Bible-thumpers" blast, and quickly added that the supporters of the Mississippi law, along with their "like-minded brethren from North Carolina" were all "hypocrites."

Eichenwald set up his social conservative Christians are bad Christians argument by noting that "a lot of rage has been directed at these politicians based on stances involving nondiscrimination and equal rights for gay and transgender people. Those are all strong arguments, but ones these self-proclaimed 'good Christians' will never hear. Unfortunately, when some folks believe they're doing God's work, they don't much care how many people they run over." The journalist then launched his condescending pro-LGBT theological treatise, which was generously sprinkled with many of the oft-used left-wing talking points about religion in general, and Christianity in particular: 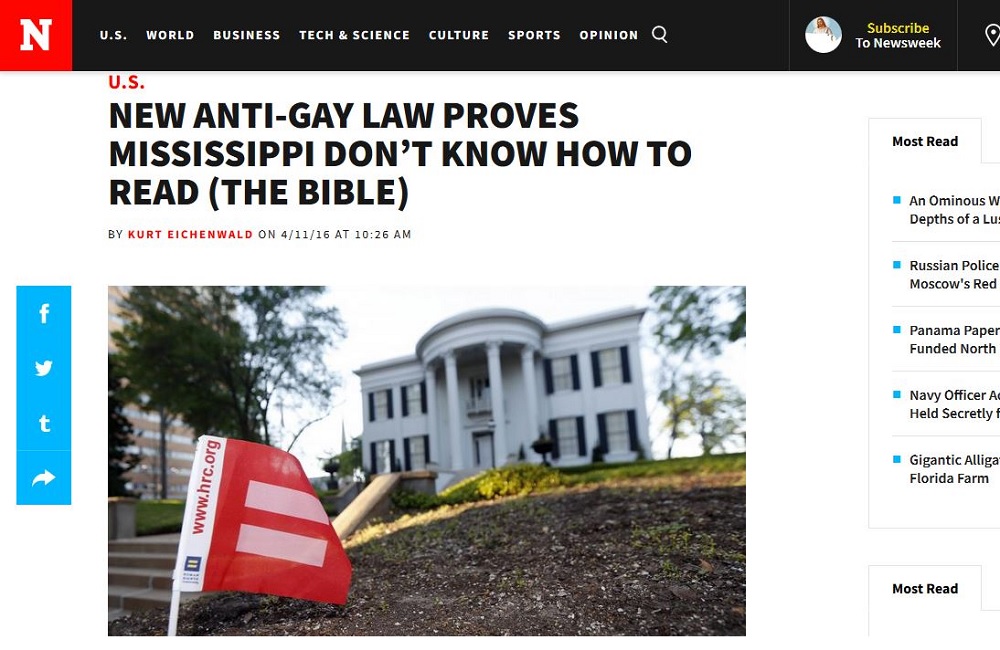 Before getting too deep in the weeds explaining Christianity to these Christians, a few simple points need to be made. There is no religious prohibition to selling cake or providing therapy to a gay person. Strange as it may seem to these people who appear to believe the Bible is all about sex (with a few parables sprinkled in), nowhere in that book is it deemed improper to engage in a business transaction with someone a Christian believes is a sinner.

There are Christians who lawyer up the Bible to make it say what they already believe. Some point to a passage in 1 Corinthians in which the Apostle Paul talks about whether Christians should eat meat sacrificed to idols. Seriously—they start with steaks made from cows slaughtered for Zeus and from there draw a straight line to baking a cake for a gay wedding. But even that quite illogical connection is based on what can be interpreted only as an intentional misreading of the passage.

Let's apply that to the new law in Mississippi. Assuming for the sake of argument that homosexuality is a sin, would people turn gay because they saw a Christian taking photographs at a wedding for two men? Would a patient in a therapist's waiting room become gay after seeing a lesbian go into the counselor's office? Except in the bizarre world of choleric Christianity—where there seems to be this belief that everyone is looking for any excuse to have sex with someone of the same gender—the idea that seeing photographers or therapists do their jobs would cause others to suddenly become gay is absurd.

Of course, this is a straw man. It isn't about participation in same-sex "marriages" causing "people [to] turn gay." It's about Christians refusing to participate in someone else's sin. Countless Christian martyrs went to their deaths during the rule of the pagan Roman emperors for refusing to offer a pinch of incense to the state's gods. Whole hosts of other people in the following centuries followed in their footsteps when rulers or society pressured them to do something contrary to the Christian faith.

The writer claims he's knowledgeable about Christianity, but goes out of his way to deny that there's a biblical basis for the condemnation of homosexual acts. This moral precept goes all the way back to the ancient Hebrews, and was reenforced by the earliest Christian theologians, including St. Paul. It's not just Leviticus.

Eichenwald subsequently underlined that "if people tell you they can't bake a cake for a gay wedding because of their 'sincere religious convictions,' ask them which part of the Bible relates to business transactions with people they perceive as sinners. They won't have an answer." Despite constructing his own straw man, he went after social conservative Christians for "grasping at straw men" by pointing to Ezeckiel 3:17-18: "In context it is clear that God is speaking here to Ezekiel individually and not issuing a blanket proclamation. If some wedding baker says that is not true, and all of God’s words to Ezekiel were instructions for all of humankind, never eat anything that person cooks; in the next chapter of the same book, God instructs Ezekiel to bake bread using feces from another man."

Looming over all of this is the reality most self-righteous Christians refuse to face: Outside of those proscribed by the Ten Commandments, the Bible does not elevate one sin as more important than any other. If people want to invoke the Bible to define sin, then picking up sticks on the Sabbath is just as forbidden as fisting. And while there are sections of the Bible that define gay sex as a sin, they include plenty of other actions that are deemed equally serious sins—often in the same sentence. In 1 Corinthians, for example, Paul condemns what he calls sexual immorality, but only as part of a chain of other sins, including greed, drunkenness and speaking abusively to others. So do these bakers and photographers refuse to participate in extravagant weddings with an open bar at the reception that leads to Uncle Larry cursing out Cousin Bob? If not, why not? Do Christian therapists refuse to help alcoholics? If not, why not?

The answer is obvious. These anti-gay laws have nothing to do with religious freedom. They are about reinforcing the hate of Christians who learn about their religion from other haters. Parishioners who arrive to church drunk or in Lexus SUVs, if people insist on invoking the Bible as literal truth, are sinners.

Isn't Eichenwald being presumptuous and un-Christ-like by claiming that people who own Lexus SUV's are sinners?

As you might expect, the left-of-center writer had no problem likening orthodox Christians to Jesus's most notorious opponents near the end of his piece: "Even mildly religious Christians know that the scribes and Pharisees condemned Jesus for associating with prostitutes and other people of whose conduct they disapproved. He ate with them, he drank with them, and if there had been a camera around, he probably would have taken selfies with them. And had modern Christians been around back then, they would have been right there with the Pharisees, condemning the man they now call the Messiah because he hung out with sinners."

He then threw one final stone: "So the message to these Mississippians is: Just bake the damn cake and stop whining. Or at least accept that your desire to discriminate against gays has nothing to do with your religion and everything to do with bigotry."

It should be pointed out that the same Jesus that Eichenwald praised for "associating with prostitutes and other people of whose conduct they disapproved" had this advice in Matthew 18:

A chapter later, Christ also had something to say about the nature of marriage: "Have ye not read, that he who made man from the beginning, Made them male and female? And he said: for this cause shall a man leave father and mother, and shall cleave to his wife, and they two shall be in one flesh. Therefore now they are not two, but one flesh."

In reality, it would be people like Eichenwald who would be condemning Jesus for being so "intolerant" towards sinners.