Since Wednesday, ABC, CBS, and NBC's morning and evening newscasts have all played up the social media frenzy over Texas State Senator Wendy Davis' multi-hour filibuster on Tuesday against a pro-life bill. On Friday's Today, NBC's Tamron Hall claimed that the Davis story is "another example of how social media can turn a story into a whole other stratosphere. I think without Twitter and Facebook, this would have been a big story, but not to this magnitude."

By contrast, during the trial of abortionist Kermit Gosnell earlier in 2013, ABC and NBC completely ignored the widespread outrage on Twitter over the case. It took CBS four days to notice Kirsten Powers' April 11, 2013 USA Today column which "accused the media of ignoring the story because...[of] a bias in favor of abortion rights," as Jan Crawford reported on CBS This Morning. Crawford then pointed out how "those charges went viral on Twitter."

NBC's Kelly O'Donnell spotlighted on Wednesday's Today, how Davis' pro-abortion filibuster "struck a chord, with the topic 'Stand with Wendy' trending on Twitter throughout the night." The same morning, on Good Morning America, ABC's Josh Elliott pointed out how "even President Obama Tweeted his support to Davis." Later in the day, on NBC Nightly News, Brian Williams hyped how the Texas Democrat "chose to make a stand in front of her fellow lawmakers, and a viewing audience that grew based on word of mouth and social media."

Correspondent Manuel Bojorquez trumpeted that "the unfolding drama topped the list of worldwide Twitter trends" on Wednesday's CBS This Morning. Bojorquez spotlighted Tweets from three prominent liberal supporters of State Senator Davis' filibuster: President Barack Obama ("Something special is happening in Austin tonight #StandWithWendy"), Senator Harry Reid ("Wendy Davis engaged in the kind of filibuster I can support. #StandWithWendy"), and an over-the-top post from atheist/entertainer Rick Gervais ("Whatever the outcome, @WendyDavisTexas efforts entered her into the pantheon of American heroes tonight. #StandWithWendy").

By Thursday, ABC's Diane Sawyer proclaimed on World News how the state legislator "became a folk hero to her supporters after talking for 11 hours to block conservatives from changing current law in Texas and closing nearly every abortion clinic there." Correspondent David Kerley soon added that "Davis' shoes, which she wore to endure standing all that time, are now a trending search term."

On Wednesday's Special Report on Fox News Channel, the Weekly Standard's Stephen Hayes gave his own personal anecdote about how he observed journalists promoting the livestream of Davis' filibuster, and pointed out the double standard between the liberal media's coverage of the Texas state senator and their coverage of the Gosnell trial:

BRET BAIER: Steve, the bill itself, I think, has been a confusing issue for some folks. I mean, it does not ban abortions across the board in Texas. It bans the procedure after 20 weeks of pregnancy....Require clinics to upgrade their facilities to become ambulatory surgical centers, and they'd need admitting privileges at a hospital within 30 miles. And that basically is in direct result of the Gosnell situation in Philadelphia. 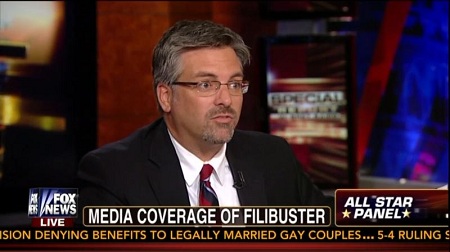 STEVE HAYES, WEEKLY STANDARD: Right, and I think – you know, as others have pointed out – I mean, these are similar laws that are prevalent throughout western Europe. We've seen similar laws in states here.

But I think the Gosnell comparison is apt for another reason. It was absolutely fascinating last night, as I was on my computer looking at Twitter to see the number of journalists who started Tweeting about this filibuster, and with, I think, enthusiasm, and got people to tune in – watch the live – the live broadcast of this.

There is no issue on which reporters are more one sided than on the issue of abortion, and we saw that – certainly, we saw that in spades with the Gosnell question when – you know, day after day, Fox was doing reports. Others were doing reporting on what was happening in the trial. I mean, it was real news – in terms of news goes, absolutely riveting stuff that was happening in the courtroom, and it was largely ignored by the mainstream media.

Here, you have one woman standing up talking about something – I would say mischaracterizing, in some respects, what is this law was doing – and the national political reporting scene explodes with enthusiasm for her efforts.