The day after hosting conservative guests, White House Press Secretary Sarah Huckabee Sanders and her father, Mike Huckabee, the former governor of Arkansas, the liberal ladies at The View had a bone to pick with their guests. One by one, each host went on a tirades against both of them, after Mike Huckabee told a conservative outlet some less than flattering comments about The View hosts’ tone.

The comment in question came Thursday morning after Mike Huckabee appeared on Fox Business Channel, where he was asked about his appearance on The View:

HUCKABEE: I didn't go in there thinking they were going to give me warm hugs and kisses I've been on that show many times but I think it's important that those who are conservative, that we're willing to go to the lion's den, that we show we’re not afraid, and we've got a position we're willing to defend it and frankly it juxtaposes our view and our spirit, vs. theirs which is full of anger and irrational hatred toward the president. 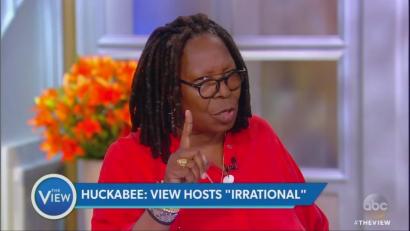 A clearly ticked off Whoopi blasted Huckabee’s comments, amidst boos from the audience: “You know what, we really worked hard to do a fair interview and I resent that you would do that,” she said.

Whoopi continued her take down of Huckabee, insinuating that his words were directed at their show because they are an all women talkshow, so his criticism must’ve been based in sexism:

Joy Behar then put the shoe on the other foot, claiming that “hate” was a characteristic of the right, not the left. She even laughably claimed that she didn’t hate Trump:

It's interesting how he sees us as hating Trump irrationally when the hatred towards Hillary Clinton and President Obama was like hurricane level, like Irma, you. It was a big, big hatred for the two of them. I don't hate Trump. I don't like what he's doing.

Host Sara Haines instead called out Sarah Huckabee Sanders, for complaining about the media lumping all conservatives together unfairly, while saying that her father did the same to them, as the “left”:

HAINES: What I find a little duplicitous was when we sat here I specifically asked Sarah a question and she said ‘the media characterizes all Republicans, all conservatives, all Democrats’ and then her father, which I know is not her, but goes on in two different quotes says that the liberals and Democrats and these women were irrational-- we were also -- we're very different.

“If we were irrational, you would have been limping out of here,” Whoopi mocked.

Bringing it back to sexism, Joy Behar said: “It’s a very feminine thing to say. Women are irrational, they're hysterical.”

“I don’t think any of us--I think facts trump emotion every single time. And I think we’re all very careful to be fact based. I asked him factually about Sheriff Arpaio and the fact that in 2011 the department of justice did find he had committed various civil rights violations,” she stated.

“They don't care about that,” Behar quipped. After going around the table apparently it was libertarian host Jedediah Bila’s turn to blast Huckabee, and she had one of the strongest takes of all:

BILA: When you're a right wing talking head and I was one, I worked for Fox News, I came from there. What you're trained to do really, is to go into what's referred to as the liberal cesspool or the lion's den and you go in there and you defend your point and then you go back to the friendly zone and you say ‘oh, you know, they're out of touch with America,’ that doesn't work here, Mike, because I am a conservative and I didn't vote for Trump and I am standing for conservative principles. You don't get to say you came here and the liberal media opposed you. I sat here and it's not irrational that I opposed Donald Trump. Donald Trump's character was questionable. He has gone on Twitter rant that have insulted foreign policy leaders, that have insulted people in the intelligence community. That have insulted media figures. Donald Trump is voting to raise a debt ceiling that when President Obama did that, you all Republicans out there had a problem with it.

HOSTIN: Why the training though? What I don't understand is why would that be the training?

BILA: Because you know what, cable news has a lack of independent thinkers and everyone is interested in playing to the base and everyone’s interested--this is our viewership, this is “our” president because he's the Republican and our network is built on this Republican brand. You know what? No more. No more. There are people out here that stand for principles and I am one of them and these women are one of them and you don't get to pull us in media, whatever. No, no! [applause]

Joy Behar went on to defend her citation of Politico, as using “facts,” even claiming that the left-leaning site was not biased:

What I find really disheartening is when you say something -- like I said he lies 95% of the time and I quoted Politifact. Politifact is a very, very objective organization that basically, you know, tallies how many times the guy says lie. Some of it is a big lie, some of it is a little lie, some sort of a lie. But 95% of the time he's not telling the truth. And they go around saying that that is not true. If they don't believe Politifact and they don’t believe The New York Times or The L.A. Times or The Wall Street Journal or The Washington Post or us, who do they believe? Breitbart News and Fox. That's not enough. I'm sorry. That's skewed. Too much.

Afterwards, Sara Haines lamented that calling “names” like “irrational” stops conversations and Bila blasted Huckabee again: “He’s speaking to the base now and he’s lost his identity as an independent thinker in that moment and that’s a shame.”

As much as The View hosts bristled at being called angry and irrational, Huckabee’s comments were not ludicrous to anyone who watches the show regularly. While their interview with the Huckabees may have been civil, (if not filled with loaded questions), the panel has a reputation for losing their cool with conservative guests and hosts. From cheerleading to impeach President Trump, on numerous episodes, to chanting “lock him up,” to making ridiculous accusations against Trump and his family, there has been no shortage of “irrational” rants and tirades about the president, and that is not a sexist claim to make.