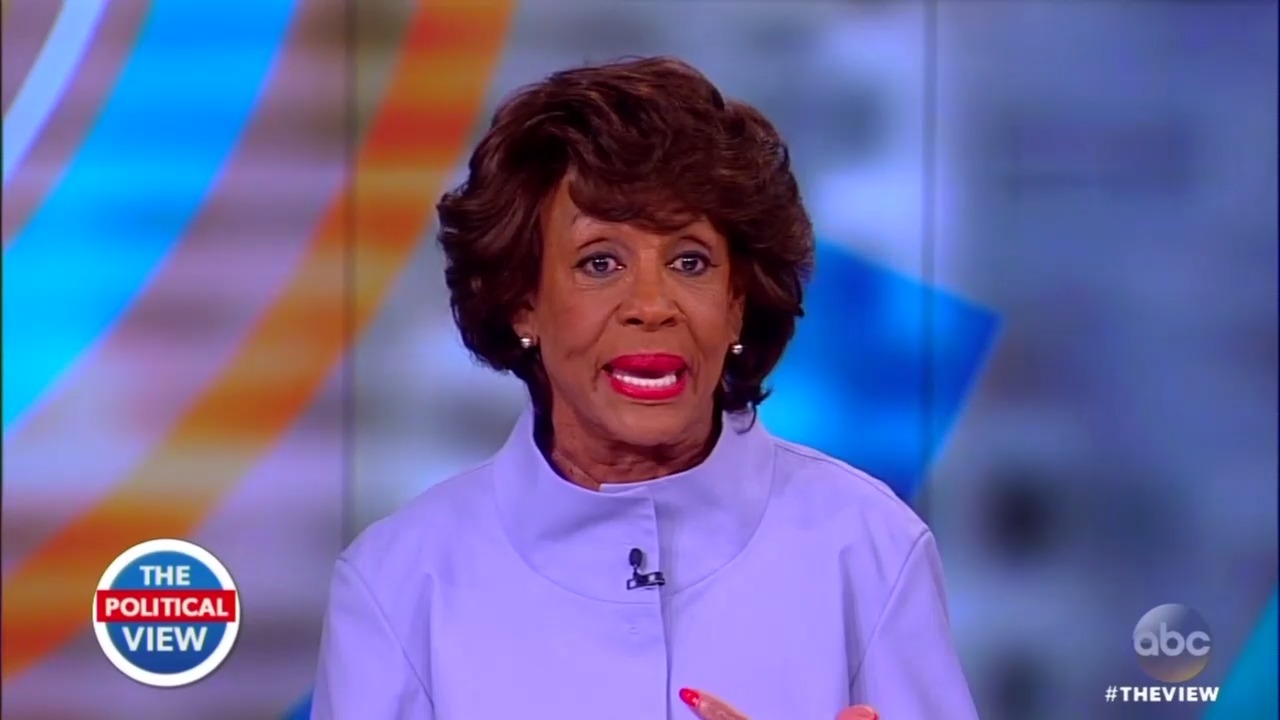 Rep. Maxine Waters (D-Calif.) who has openly campaigned for impeaching Trump since he took office, was the guest on Friday’s The View. Like two peas in a pod, Joy Behar and Waters hit it off immediately, while co-hosts Paula Faris and Jedediah Bila actually tried to press Waters on her statements about impeaching Trump, the White House leaks, and the Democratic party’s shortcomings.

In the beginning of the interview however, the questions were uncritical because they came from the liberal hosts. Joy Behar asked if we were “getting closer” to impeaching Trump, while Sunny Hostin wondered if there was a “smoking gun” Waters saw, to impeach Trump:

BEHAR: What I want to ask you is you have been calling for Donald Trump's impeachment since the get-go because you saw how it was going and so did we, I have to say. I'm wondering now with the grand jury and all of this, do you think we're getting closer? What do you think?

SUNNY HOSTIN:I would love to ask you that Congresswoman, Auntie Maxine. Is there a smoking gun for you? What do you think is the connection between the Trump administration and Russia and Putin?

Going around the table, the next question was from Sara Haines, who asked Waters if she was “joking” when she said that Vice President Mike Pence was preparing for Trump’s impeachment.

Waters said she was joking, but admitted that Pence would be “next” on her target list after Trump got impeached.

“Do you think Pence will be better than Trump?” Behar asked Waters.

“No. When we finish with Trump we have to go and get Putin!” Waters replied, mistakenly calling Pence “Putin.”

Finally the discussion became more interesting after right-leaning hosts Jedediah Bila, and Good Morning America correspondent Paula Faris started asking more critical questions. Bila began by asking Waters if Democrats were focusing too much on the Russia investigation and ignoring what voters actually cared about, jobs and the economy. Bila mentioned the record-high Dow numbers this week and asked,“Are you willing to give him credit that he's making progress?”

“Absolutely not,” Waters emphatically answered to thunderous applause from the audience.

I think that too much credit is given to presidents about how the markets are working and I really don't think that he's done anything that he can take credit for. And so I don't believe that he has had any initiatives, he's had any legislation. He's not been involved in public policy. He doesn't know really what's going on on Wall Street. I don't give him any credit.

BILA: What about deregulating the economy though? What about some of the job promotion he's done around the country, if you talk about coal jobs? You don't think that's related?”

WATERS: Absolutely not. He's not created any substantive number of jobs. He's made these people believe he is going to bring back the coal industry. It is not going to happen.

BEHAR: At what point do you think his supporters will figure that out?

Waters then went on to disparage Trump voters as people who weren’t willing to take any responsibility for their jobs going away:

WATERS: You have to determine why they stick with him. They stick with him not because they think he is going to change government as such. I think they stick with him because he has made them believe that somebody else is responsible for their problems, for these small towns and these areas where the stores have closed down, the jobs have left, it is those people over there, I'm going to build a wall, I'm going to keep those people out. They're the cause of your problem, they're getting something for nothing. It's not you, and they believe that.

“I think people are just really tired of government in general and the inefficiency of government, “ Paula Faris added. She then asked about the recent leaks and if Waters was “disturbed” by them, which of course, Waters wasn’t. In fact, she practically called for more leaks, saying the media was doing its job in reporting the leaks:

FARIS: There's a lot of Democrats disturbed by the this because it threatens our national security. Are you disturbed by it?

WATERS: No, not at all. I'm so glad they're telling us what's going on.

FARIS: We don't need to hear these conversations. They're confidential. This threatens national security.

WATERS: I need to hear these conversations. I need to hear -- [ applause ] Unfortunately this is his problem. He is in a White House where he's got people working for him that don’t believe in him, don't like what he's doing and they're trying to tell the American public something.

Although Faris and Bila tried to keep pressing Waters on this point, she kept placing the blame on Trump. After Bila brought up the point that these leaks could happen to any president, so why celebrate it now, Waters kept denying that this would happen to another president. She stated:

After the commercial break, Faris asked Waters about polls showing Americans thought Democrats only goal was to go after Trump. Waters didn’t deny that, but said that Democrats were working at changing their image with voters and had rolled out a new publication detailing what they stood for.

Shortly after this, the panel asked if the internet rumors about Waters running for president in 2020 were true. She denied the rumors saying, “I am not running for anything except the impeachment of Trump!” Waters said to loud applause.