Sanders: My 'Babies’ Have ‘Perfectly Prepared Me to Deal With White House Press Corps’ 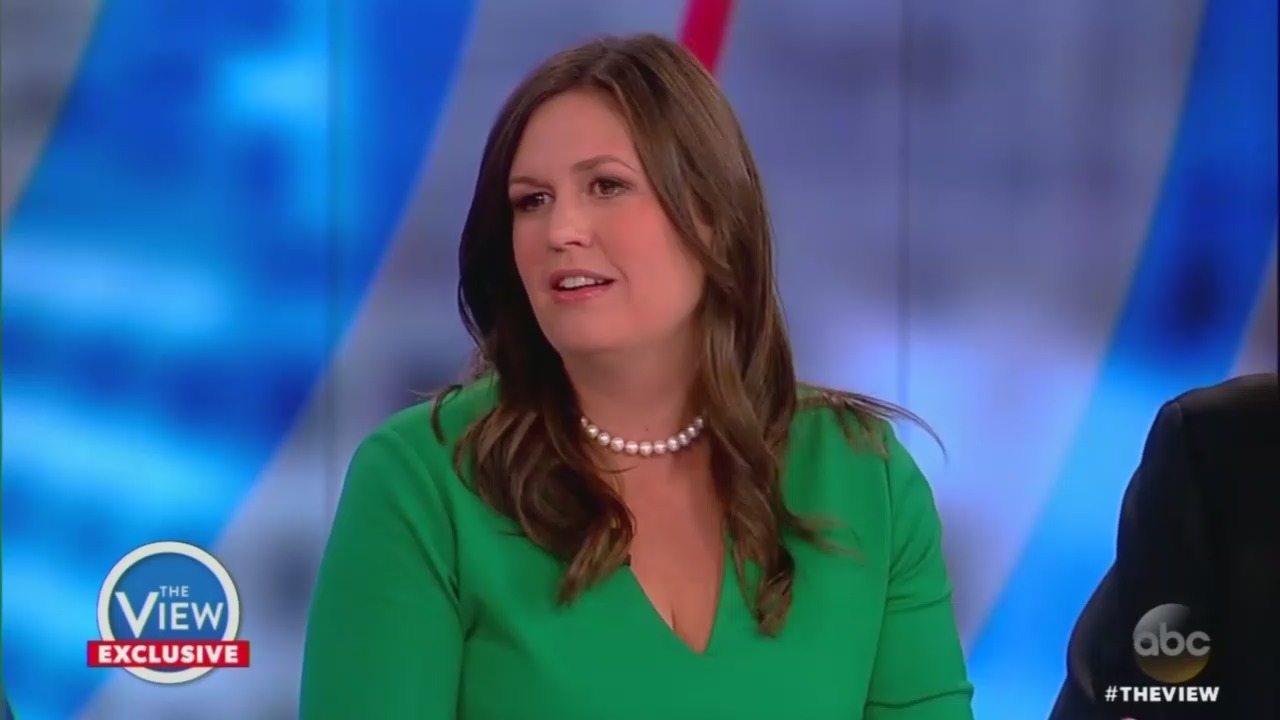 Wednesday on The View, White House Press Secretary Sarah Huckabee Sanders and her father, former Governor of Arkansas Mike Huckabee, spent the entire last half of the show fielding questions about Trump from the liberal hosts. But The View hosts never got their “gotcha” moment, as the pair always had a rebuttal for the panel’s heavily loaded questions.

The White House Press Secretary even called out the media for using reports to “editorialize” rather than give the American people“facts,” and mocked the media’s persistence at harping on certain issues.

The majority of the interview’s questions were actually accusations directed at Huckabee Sanders, about her experience in the White House and working with President Trump. But a handful were lobbied at her father as well:

BEHAR: Trump, the things he says about women are just horrendous and we all know that. So let's not pretend that he hasn't said some horrifying things about women. We know that. Just nod. You don't have to say anything, just nod because you know it's true. Having said that, how can you let your daughter defend him?

HOSTIN: There's a well documented history of racism. How can you sit here and say he’s not a racist?

BEHAR: I don’t understand how the evangelicals can support him. You're a religious person. Some of the things that have come out of this mouth, are so against the Bible, so unreligious of him. How can you support someone like that?

However, the show started off friendly for a brief moment, with the panel praising Huckabee Sanders for being the third woman to take the role of WH press secretary, and the first mother to do so. While Whoopi tried to make a dig at Trump, Sanders turned the question around to mock the media as childish:

WHOOPI: So you're not only -- you're only the third woman to serve as the White House press secretary. [ Applause ] You're also the first mom, the first mother to hold the job.

WHOOPI: So when you get those calls uh-oh he's tweeting and it's 2:00 in the morning, how do you do everything with the kids and trying to do your job and --

WHOOPI: How old are your children, I should ask?

SANDERS: Little babies. So they have perfectly prepared me to deal with the White House press corps. I get to answer the same question all day long.

WHOOPI: As the president, c'mon now.

SANDERS: And I've gotten pretty good at saying no. I think my kids have been a perfect foundation for my job.

After that slam, Joy Behar tried to badger Sanders for saying “I’ll get back to you” during press conferences. Sanders explained that she is communicating with reporters all day long, not just in the press room, so she does follow up with reporters off camera. Behar then shifted gears, and essentially admitted that the show was biased to conservatives, so she was surprised that the pair showed up:

JOY BEHAR: I have to say Sarah, that I’m surprised you--Who approved you coming here? The mooch? [laughter] I mean -- you know. I mean, is that why he was fired? I'm shocked that you're here. Both of you. Even though you were my favorite Republican.

BEHAR: Back in the day.

For the rest of the interview, nearly a half hour, the hosts didn’t let up, trying every subject they could think of to trip up the pair, on DACA, Trump’s past comments about women and his alleged racism. Even libertarian host Jedediah Bila pressed Sanders about Trump’s attitudes towards women asking if it was “hard” for her to defend him to the media:

Personally, as a person, as a woman, as just a person out there, have you struggled with some of the stuff he has said and has that made it harder for you to defend -- maybe his policy is okay but the person, the man behind the presidency is it hard for you sometimes?

After a commercial break, host Sara Haines brought up the media and Trump’s hostile relationship. Haines Asking if it wasn’t the burden of Sanders, and the White House to “mend” the relationship between the press and the administration. But Sanders said the media had an equal responsibility to be honest and report the facts:

HAINES: The president has said he's at war with the fake news media. We can agree that this hostile dynamic doesn't serve the American people. We have heard what he and the administration feel the media should be doing on what they're doing wrong. What do you think is on the responsibility of the administration and people like yourself to help on your end to mend these fences?

SANDERS: I think going back you look at every administration and you're always going to have a bit of friction between the press corp. And the White House. We have seen that escalate in this administration. I think that there is responsibility certainly on both sides. We have to be forth coming, we have to be honest, that's our obligation to the American people. But it's also journalists obligation to present facts, not opinions. It's the American people's ability to get to take those facts and decide where they want to come down on an issue. To me, a good news story is if all the facts are presented and you don't know which side the author of that story is on.

I think we need to get back to a little bit less editorial comments from the media and a little bit more fact delivering to the American people.

After Haines pushed back, saying that Trump demonized good reporters when he called the media as a whole, the “fake news media,” Sanders pointed out that the media also generalizes when it comes to conservatives:

“I think that goes both ways. The media often characterizes all Republicans, all conservatives, all Democrats. I think that happens certainly on both sides,” she stated.

“Is the media supposed to not report on the fact that 95% of what he say is a lie?” Joy Behar asked, to thunderous applause.

“The problem with that, Joy, is that -- you are doing exactly what we're talking about and pushing a false narrative,” Sanders responded.

Behar then wrongly cited the left-leaning fact-checking website Politifact as being part of “Politico,” to claim that only 5% of what Trump says is true, with backup from host Sunny Hostin.

BEHAR: No it’s not. It’s from Politifact from Politico. It's not just the dreaded "New York Times." It is other outlets that say it. 5% of his statements are true. 5%. And you, I feel for you. I feel sorry for you. That you have to go out and defend those lies every day.

HOSTIN: And that has been documented. So as the face of really the administration, what do you say to the American people when you have a boss that engages in untruths?

SANDERS: Well, again, I completely disagree with the fact that what you're saying is only 5% of that is true. I know that is simply not accurate and I think that's one of the dangers that we have right now is we are pushing so many false narratives every day. We are creating false perceptions about the president and frankly inhibiting his ability to succeed. I think America should want him to succeed. He is the president whether they voted for him or not and I think we have to get behind him. We should be championing for his success because his success is America's success.

“But you also have to get somebody in the office who recognizes what the truth is,” host Whoopi Goldberg used as a segueway before actually asking Sanders point-blank: “Where was president Obama born and is he an American citizen?”

“I think this has been pretty well addressed,” Sanders laughed.