Is He 'Losing It?' 'The View' Makes Fat Jokes, Wonder If Trump Has Dementia, In Sexless Marriage 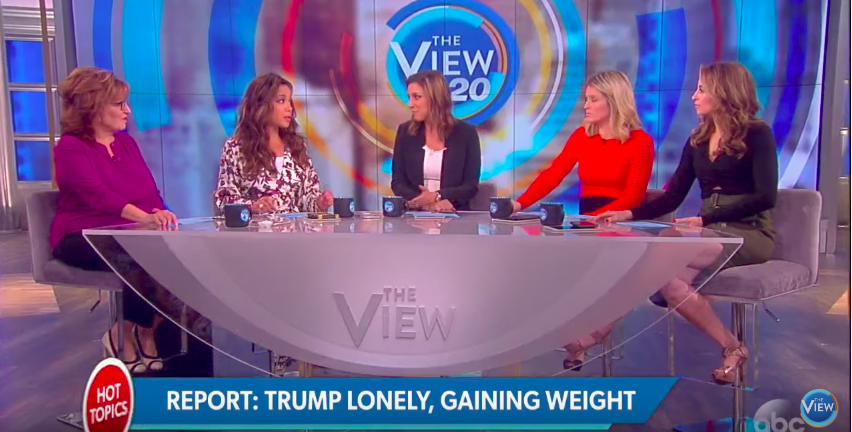 Friday morning on ABC’s The View, the panel spent two segments gossipping about President Trump’s health. After joking about the Trump ‘covfefe’ fiasco, Joy Behar admitted her paranoid theory that Trump was getting dementia and “losing it.” The women also expressed faux concern about his physical health, after an anonymous source told CNN that said Trump was becoming depressed and gaining weight.

“It turns out I’m not the only one losing sleep and binge eating over Trump’s presidency. Guess who else is binge eating? Trump, himself is,” Behar said to laughter and applause from the audience and panel.

“Forget about Mexico,” Behar laughed. “He needs to build a wall around himself and those Ring-a-ding-dings!” Turning to the panel, Behar shifted gears and admitted that she was “worried” about Trump’s health.

“But you know what? I’m a little worried about him,” she admitted. Behar then mocked Trump for feeling the physical affects of the presidency so early into his term. “It usually takes four years,” she said. “You know Obama got gray hair after four years and you could see it but he was buff.”

“He doesn’t exercise,” host Paula Faris said. “And he doesn’t sleep much,” Sunny Hostin added.  After more talk about how Trump is never seen being active, they shifted gears to talk about the negative effects on the brain from not getting enough sleep. That seemed to spur Behar’s next question:

"Do you think the lack of sleep is causing these ‘covfefe’ moments? Because he’s in the middle of the night, he’s half awake, and he’s writing crazy stuff down now," she asked.

After a commercial break, Behar opened a gag box that was supposed to be from the “Make America Great Again Committee,” which had a orange paint vial, an autographed picture of a shirtless Vladimir Putin, a remote control that only gets Fox News, and a ‘covfefe’ coffee mug.

After that gag, Hostin brought up Behar’s earlier point that Trump may be on the road to becoming “crazy.”

HOSTIN: I will say Joy, you said earlier that Nixon apparently was walking along the White House walls--

BEHAR: Talking to the portraits

HOSTIN:-- and you thought perhaps

BEHAR: That he’s losing it too.

HOSTIN:--Perhaps that Trump was heading that way.

BEHAR: Yeah I think he’s losing it. I really do. But we’ll see soon. It’s gonna all be over.

BILA: You’re not being funny about it. You actually do think that.

Faris explained that that was all “ linked to lack of sleep.”

She then crassly wondered about Trump’s sex life, if his wife being away was causing him to have a hard time falling asleep.

“It’s also possible, that Melania- is living in New York most of the time and he’s in Mar-a-lago. Sometimes sex puts you to sleep. He ain’t getting any of that. He’s got nothing and that’s a problem,” Behar stated.

Somehow this prompted more fat jokes from the panel. Sara Haines joked about Trump taking “two scoops of ice cream,” saying he should cut back to just one.

“He does have to be careful because he gains weight in his midsection and he talks about eating two scoops of ice cream. If he’s not going to move, he needs to cut back to one scoop,” Haines joked, with the panel joining in with laughter and more joking.