Friday morning on The View, the show started off with a fiery exchange over the U.S. missile strike in Syria last night. The panel was strictly divided, with conservative hosts Paula Faris and Jedediah Bila fiercely disagreeing with liberal hosts Joy Behar and Sunny Hostin that the missile strike was unconstitutional.

Bila began by saying she was “proud” of President Trump for taking action when President Obama did not. Joy Behar took issue with this, saying that Obama tried to take action but couldn’t get congressional approval. Bila shot back quickly, when you’re president, “the buck stops with you.” 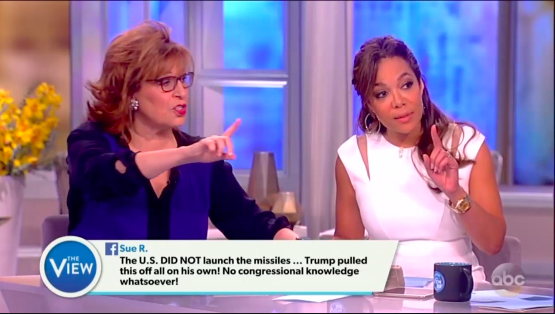 Sunny Hostin jumped in to back up Behar. “You’re not supposed to be able to do it without Congress,” she argued.

An exasperated Behar then made this absurd claim: "If he had not gone to Congress, President Obama, they would’ve impeached him!"

As you may remember, Behar called on President Trump to be impeached earlier this week.

“That’s not true! It’s not unconstitutional to do that!” she stated.

After some back-and-forth bickering, Hostin asked for the group’s attention as she cited the War Powers Act of 1973, as her reason for why Trump allegedly didn’t have the authority to launch a missile strike without Congress’ approval.

“It made it very clear that a President couldn’t unilaterally act like this without Congress,” Hostin claimed again.

Following this, Paula Faris defended the missile strike in an emotional argument with Hostin that anyone with any ounce of “humanity” couldn’t have let Assad get away with the chemical attack.

After things cooled down slightly, host Sara Haines stated that she thought it was a “bold move” for Trump to make this decision while meeting with China’s president.

“He wants to show might,” Haines added. Hostin then broke in with this shocking accusation:

After some more of the same tense back-and-forth bickering, Behar abruptly ended the segment, saying she wanted to “move on” because she had “had enough of this.”