‘He Needs to Be Impeached!’ Joy Behar Freaks Out on 'The View' 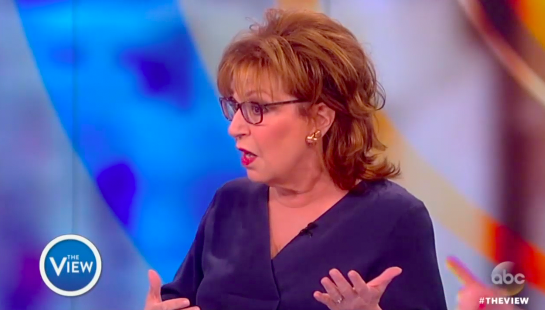 During a segment talking about Russia, North Korea, and Trump’s relationship with these countries on The View Monday, host Joy Behar threw a temper tantrum, calling on the president to be impeached. After reading out-of-context quotes from Trump about using nukes, Behar couldn’t contain her rage any longer and demanded that Trump be “taken out of office,” to roaring applause from the liberal audience.

The segment began by talking about Nikki Haley’s weekend appearance on ABC where she was grilled by Martha Raddatz about Trump and Russia. Host Whoopi Goldberg said she was “freaked out” by Trump staying out of the fray when it comes to Russia, and North Korea. Whoopi questioned, “Isn’t somebody supposed to be in charge?”

Behar then shared her own worries about Trump’s past statements on nuclear warfare:

BEHAR: The thing about Trump is, the things he has said seriously about nuclear weapons is quite frightening. I'll give you a couple. To Chris Matthews, he asked, “Why do we make them, he said, if we wouldn't use them?”  Ok. The possibility of nuclear war between Japan and North Korea: “It would be a terrible thing. If they do, they do.” Good luck. Enjoy yourselves, folks. He said he was open to nuking Europe because “it's a big place.”

After co-host Sunny Hostin criticized Trump for underestimating the nuclear capacities of North Korea, Whoopi blasted him for going after Obama when “actual poop is happening.” Behar couldn’t take it any longer and shouted for Trump “the menace” to be impeached:

BEHAR: Why doesn’t everybody face it? He needs to be taken out of office. He needs to be impeached-- [ cheers and applause ] He is a menace. You say Kim Jong Yum-yum is crazy? So is he. So is he. Get real. Come on. He is nuts and we're in the middle of it!

Sara Haines followed up by intoning how “dangerous” Trump’s words were when directed at hostile countries like North Korea.