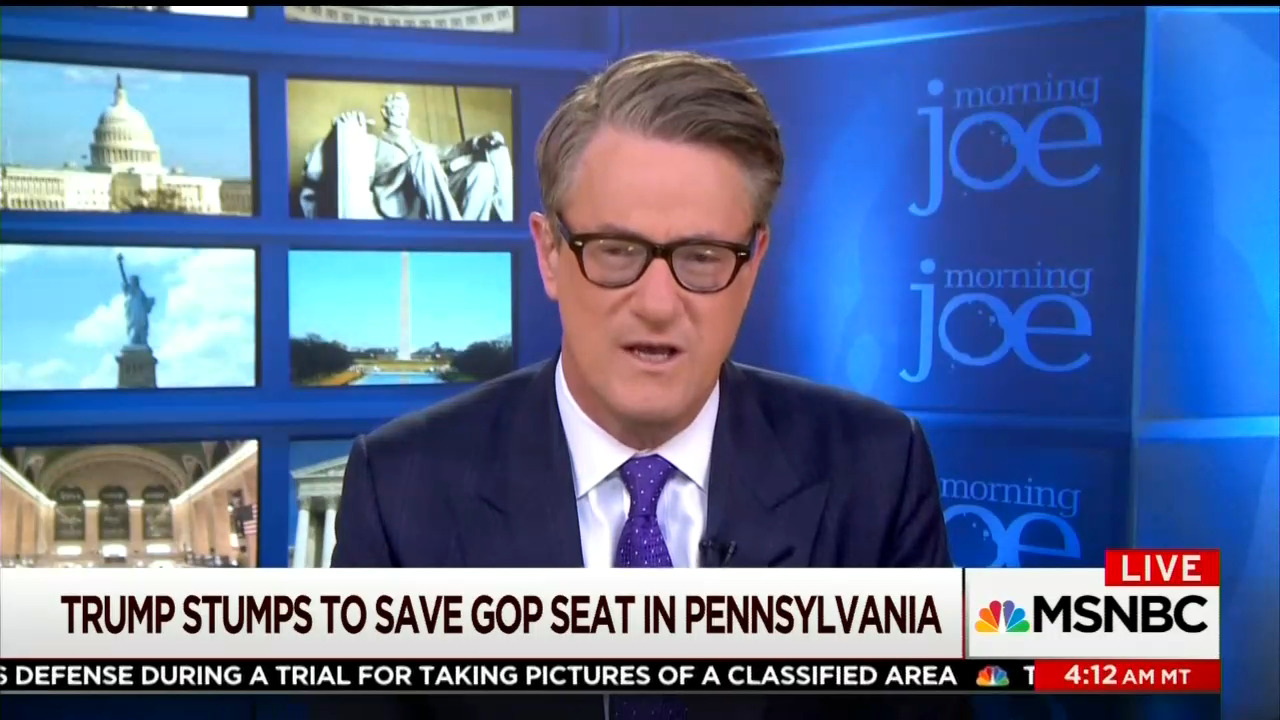 This week, NewsBusters is recounting the most obnoxious liberal bias of 2018. On Monday, we presented some of the most outrageous examples of journalists fawning over liberal or left-wing icons, and yesterday we showcased the year’s nastiest attacks on conservatives.

Today, it’s a look at the media’s Trump Derangement Syndrome as we present the most over-the-top attacks on President Donald Trump. When he wasn’t being compared to tyrants like Benito Mussolini, he was being branded a traitor who sold out America to Vladimir Putin. And of course he was repeatedly tarred as a hateful racist.

MSNBC’s Joe Scarborough claimed Trump’s stump speeches reminded him of “a Mussolini rally.” After his summit with Putin, CNN’s Don Lemon pondered if Trump would be the first president ever “charged with treason.” And over on MSNBC the President was being called a “white supremacist” who “will be forever remembered as the president who traumatized little children.”

1. TRUMP IS A TYRANT

“He [Donald Trump] talked about the fake media [to] get people booing. The booing is getting stronger by the day, whenever he [Donald Trump] goes out there and whips people up, it’s like a Mussolini rally. And yes, that’s what I said....When you rip your supporters into a frenzy there are real life consequences to that. Threats follow, often death threats....Unfortunately that’s exactly what he wants.”
— Co-host Joe Scarborough on MSNBC’s Morning Joe, March 12.

New York Times columnist Michelle Goldberg: “He’s [Donald Trump] a sort of junior player in a block of authoritarian countries.....He’s part of the block that includes Vladimir Putin, [Philippines President Rodrigo] Duterte, he’s you know, he’s kind of part of kind of an Axis Power.”...
Host Katy Tur: “Well he’s not rounding people up and murdering them without any – you know – due process.”
Goldberg: “He’d certainly like to.”
— MSNBC’s MTP Daily, August 17.

U.S. On “Slippery Slope” to Iran, Thanks to Trump

Co-host Megan McCain: “You just said we need to rise up against Trump in the same way like Ayatollah Khomeini is somehow morally relative to President Trump. I think that’s crazy.”
Co-host Joy Behar: “It’s not apples and apples. It’s not equal. But we’re on a very slippery slope in this country towards throwing democracy out of the window every single day.”
CNN analyst Ana Navarro: “We have to defend the press and civil rights here.”
McCain: “We do, but we’re not being stoned in the street for being gay.”
Behar: “Not yet! Not yet!”
Co-host Whoopi Goldberg: “Not yet.”
— ABC’s The View, January 2.

2. TRUMP IS A TRAITOR

“Article III in Section Three of the Constitution says this, ‘treason against the United States shall consist only in levying war against them or in adhering to their enemies, giving them aid and comfort.’ So, no president has ever been charged with treason, Douglas. Do you believe the President’s actions fall anywhere within that definition?”
— Host Don Lemon’s question to presidential historian Douglas Brinkley talking about the Vladimir Putin summit as aired on CNN Tonight, July 17.

“The truth is probably what is right in front of us, which is that Donald Trump was kind of a con man, a third tier failed businessman whose fortunes were rescued by Russian oligarchs....He became president with the direct intervention of Putin. He sees his fortunes as inseparable from Putin’s. We don’t know if Putin is his handler, his hero or his co-conspirator, but it’s obviously where his loyalty lies as opposed to lying with the American people.”
— New York Times columnist Michelle Goldberg on ABC’s This Week, July 22.

Putin “Weaponized” Trump to Do His Bidding

“You know, in bio technologies, there’s a notion of having a virus that can go in and rip apart DNA of something and change the entire genome of an organism. It’s as if Donald Trump has been weaponized over the years by Vladimir Putin to go in and do Putin’s bidding, to change the genetic code of NATO, of the Republican Party of the United States, of democracy. And it is astonishing how he has become such an effective and destructive virus created by Vladimir Putin.”
— Former Time editor Walter Isaacson on MSNBC’s Morning Joe, July 23.

3. TRUMP IS A RACIST

“White Supremacist” Trump Is a Danger to the Country

“The President is a white supremacist –  we heard in Charlottesville the President is a terrorist sympathizer, and our President is a clear and present danger to non-white people in America....Unless the Democratic party realizes that this man is an enemy to non-white people in America – and this is not an exaggeration –  everything in his rhetoric and policy has said so –  we will be in danger as a sovereign nation.”
— The Root’s politics editor and MSNBC political contributor Jason Johnson on MSNBC’s All In, January 11.

“We have a man child who is deranged and racist in this office. But it takes a lot of other silent people to go along with it. And we’re seeing those silent people in Congress....We are seeing all kinds of people who for small, personal, trivial gains are willing to see their country turned into the real s-hole.”
— Political analyst Anand Giridharadas on MSNBC’s Morning Joe, January 15.

“Children are being marched away to showers, just like the Nazis said they were taking people to the showers, and then they never came back. You’d think they would use another trick.”
— Co-host Joe Scarborough talking about Trump’s immigration policies on MSNBC’s Morning Joe, June 15.

The Legacy of Trump = Traumatized Babies

“He will be forever remembered as the president who traumatized little children. That’s his brand now. He’s the president, who purposefully traumatized babies and children and he traumatized them for his political gain or to look like Kim Jong-un.”
— Co-host Mika Brzezinski on MSNBC’s Morning Joe, June 18.

Put Trump on Trial at the Hague for Human Rights Violations

“He’s inciting, through mass rallies and constantly lying, fervor in a political base. He scapegoats minority populations and affixes blame to them for every problem the country faces. He alleges conspiracies of nefarious forces. He creates a mass sense of victimization among his base. And then he asserts extraordinary claims of power to protect the victims from the scapegoated populations and the nefarious conspiracy. That is fundamentally illiberal – deeply un-American – and, frankly, could be straight out of Munich circa 1928.”
— Political analyst Steve Schmidt on MSNBC’s Deadline: White House, June 26.

“We got a guy [Donald Trump] who gets up every morning and excretes the feces of his moral depravity into a nation he has turned into a psychic commode. That’s what he’s done. And he’s a bigot-in-chief and a racist in residence...Look at this mendacious, relentlessly lying, bigoted, ill-informed person that we have. He has the fleshly thesaurus of white supremacy reduced to one body.”
— New York Times Opinion contributing editor Michael Eric Dyson on ABC’s The View, June 4.

“But isn’t the story even darker than that? Isn’t the story that these people who died, apparently thousands of them in Puerto Rico, 3,000 as you point out, they’re not white people. And they don’t count to Donald Trump as much as the deaths of white people. I mean, you hate to say that about someone, but look at his record. Isn’t that indicative of who he is and what he stands for?”
— Chief legal analyst Jeffrey Toobin on CNN's New Day, September 12.

Why Would Anyone Vote for Hispanic Hating Trump and His Racist Republican Party?

NPR’s Latino USA anchor Maria Hinojosa: “It looks like this President really doesn’t care about our lives, whether we’re in cages, whether we’re in freezers in those immigrant detention camps, or whether we are dead in Puerto Rico.”...
USA Today columnist Kurt Bardella: “People aren’t stupid. They realize that ultimately this is a racist party, and I don’t know why any single person who isn’t a white person would vote for a Republican right now.”
— MSNBC’s AM Joy, September 15.

“The rhetoric of this racist, heartless, soulless man will lead to more violence....He doesn’t care. He’s got no sense of decency, no sense of duty, and no limits...No limits of what he’s capable of doing to stave off any humiliation for himself. The humiliation that his desperate actions suggest is that he knows what’s coming next Tuesday....If you want a slight check on this man and his unrelenting race to the finish here to make sure he can continue destroying this country, you might want to vote all ‘D,’ even if it’s not your party this time around.”
— Co-host Mika Brzezinski on MSNBC’s Morning Joe, November 1.

“Hate Is on the Ballot”

“Killing black people is an old American tradition, but it is experiencing a revival in the Trump era....The fact is that one side of the political spectrum is peddling hatred, while the other isn’t. And refusing to point that out for fear of sounding partisan is, in effect, lending aid and comfort to the people poisoning our politics. Yes, hate is on the ballot next week.”
— Columnist Paul Krugman in October 29 New York Times column “Hate Is on the Ballot Next Week”