Appearing as a guest on Monday's Morning Joe on MSNBC, veteran political analyst Jeff Greenfield -- whose career has spanned ABC, CNN, CBS, and PBS -- declared that Hillary Clinton could be vulnerable over sexual assault accusations against her husband as he asserted that "the lurking danger for Hillary Clinton is, first, was she enabling the behavior and, more important, assaulting the reputation of the accusers?"

Greenfield ended up slamming feminists and liberals who defended President Bill Clinton's "predatory behavior" in the 1990s, asserting that they "have a lot to answer for."

As the political analyst discussed the issue at about 7:05 a.m. ET, he began by pointing out Hillary Clinton's self-inflicted logical trap when she asserted that rape accusers should always be believed. Greenfield:

First, I think she opened the door with the statement that every survivor is to be listened to and believed. And you're quite right and so is Mark Halperin that when she said in response to a town meeting, well, you believe him until the evidence is not clear, on the serious stuff, there is not evidence that exonerates Bill Clinton. It's a lot of these stories are shrouded in ambiguity.

He then added that it was "an outrageous notion" to argue that the former President's "predatory behavior" is merely "private." Greenfield:

But the most important thing is, over the time, the idea that you can envelope all of Bill Clinton's behavior as private, that's an outrageous notion. Predatory behavior, sexual harassment, assault, whatever the facts are, those are not private, consenting matters. That is not rummaging through somebody's sex life.

He then predicted that recent debates about sexual assault on college campuses could further make Hillary Clinton vulnerable on the issue, and asserted that a "lurking danger" for her could be if she was "enabling" the behavior: 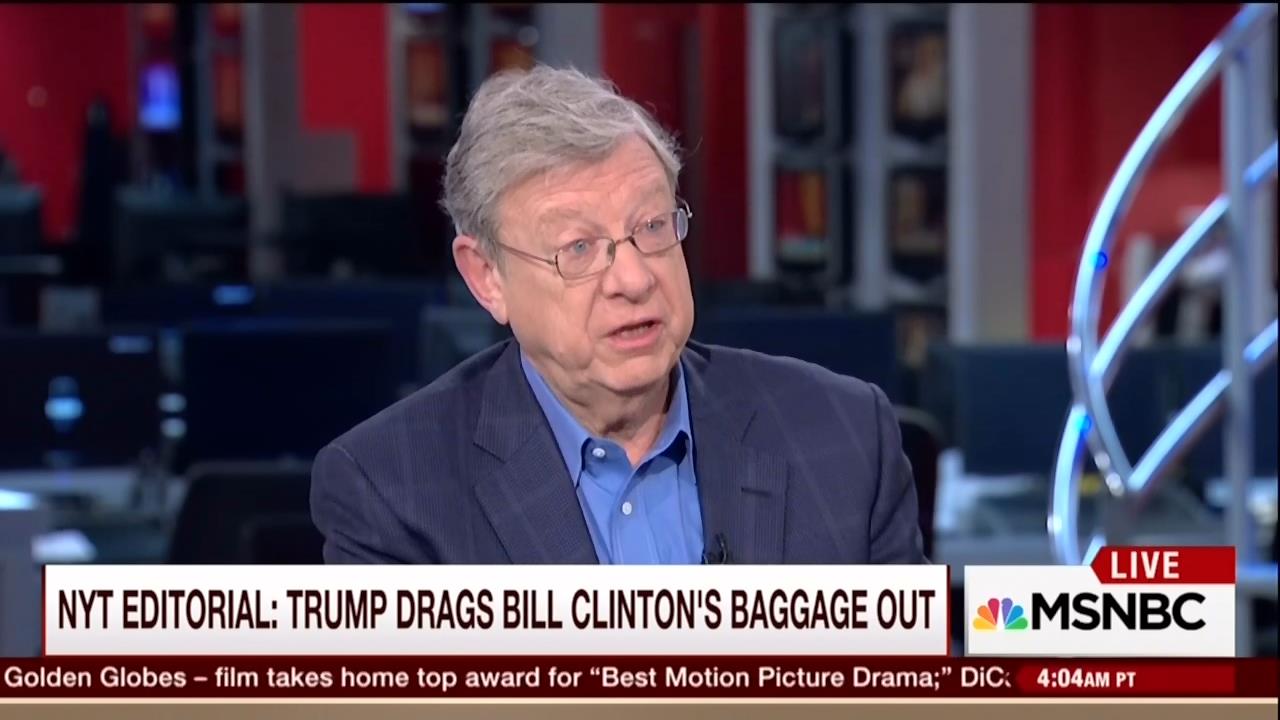 And the second thing is the enormous shift in the culture that says, particularly on college campuses, what the federal government has asked, which in some cases is putting the burden on the accused has shifted a lot of the debate on matters of sexual assault. And what I think the lurking danger for Hillary Clinton is, first, was she enabling the behavior and, more important, assaulting the reputation of the accusers?

The second is, you know, she wants a lot of support from younger women in particular. That's a base for her. Well, the women who are young and voting for the first time now may never have heard about this stuff. This is shrouded in a decade ago.

After MSNBC co-host Mika Brzezinski chimed in, "They will see it differently in this generation," Greenfield continued:

And I do think there is a problem for her, the fact, you have to give Donald Trump credit, in a feral way, he really understands the Amygdala of American politics, the fear aspect, and by raising the issue and maybe tempting her into a fight, he may have put back on the table not the issue of, as Time magazine used to say, "Does Clinton have an eye for a well-turned ankle?" That was the old euphemism for a philanderer. But whether there was behavior that would be actionable, and whether she was a part of helping to protect him from it, that's where I think the danger for Hillary Clinton is in this.

And one more quick thing. I think the hypocrisy back in the '90s of a lot of the feminists and a lot of the liberals was an outrage. They drove Bob Packwood out of the Senate for being a clumsy, you know, passer maker, and then simply just took all of the accusations about Clinton and just said, "No, no, no, it's not relevant." And I think they have a lot to answer for

Even the liberal Brzezinski agreed as she interrupted, "Yes," while Greenfield was making his point.

MSNBC co-host Joe Scarborough then added: "Betty Friedan called Monica Lewinsky, a 22-year-old whose life was effectively destroyed, said she was a little twerp that shouldn't be relevant to anybody's life."

Greenfield concluded by bringing up liberal author Christopher Hitchens, who took on the Clintons in No One Left to Lie To, as the political analyst declared that it is "very fortunate" for Hillary Clinton that Hitchens has since passed away due to his knowledge of additional "predatory behavior" by Bill Clinton. Greenfield:

And I also think -- you mentioned Christopher Hitchens -- he wrote a book, No One Left to Lie To. It's very fortunate for Hillary Clinton that Christopher Hitchens is not around for this campaign because he alleges he found other people who made the same kind of accusations -- not of "He made a pass at me." But predatory behavior.