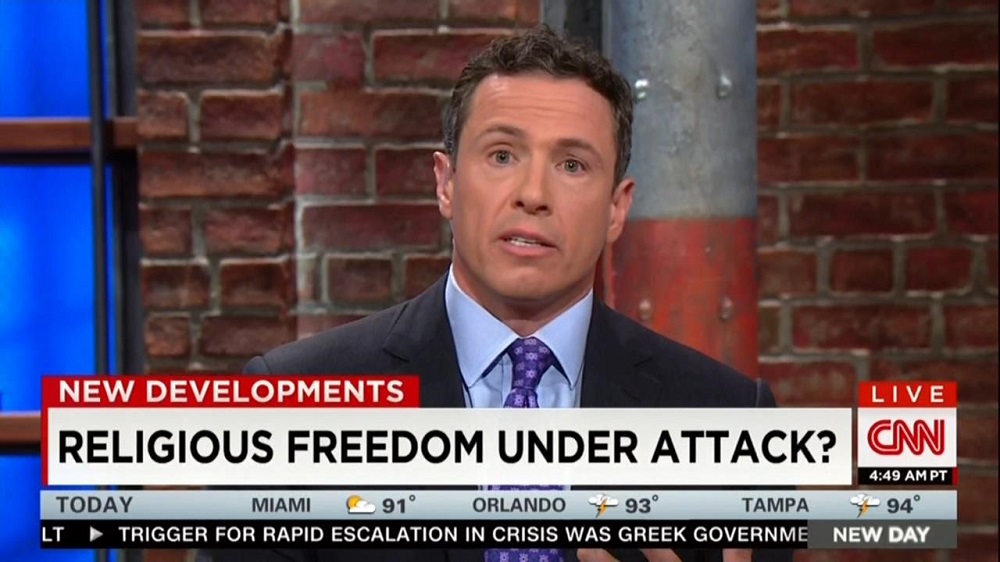 CNN's Chris Cuomo again acted like a LGBT activist on Monday's New Day, as he interviewed Peter Sprigg from the socially conservative Family Research Council. Cuomo raised the specter of Jim Crow when he claimed that a proposed First Amendment Defense Act in Congress "does smack familiar to what happened in the wake of the miscegenation laws and the civil rights laws, where...some cited the Bible; some stated religion – and said, it's against my beliefs. I shouldn't have to participate." [video below]

The anchor used some of the social left's other talking points on LGBT issues – that conservatives were trying to "project your religious beliefs onto the behavior of others. We know that we can't do that in a pluralistic society. This just seems like a little bit sour grapes, and a little bit of trying to defy...the supreme law of the land." He also asserted that religious insitutions worried about their tax-exempt status in the wake of the Supreme Court's Friday decision on same-sex "marriage" was, "as some would access...a scare tactic."

The CNN journalist followed up by countering that "when you look at Massachusetts and other states where you've had gay marriage, you do not see any type of multiplication of cases like this – this idea of the Christian baker – you know, who's a Christian first and a baker second. You don't see a lot of cases like it. And you have such strong defense of your right to free exercise already under the Constitution." Sprigg cited an instance of a religious charity deciding not to provide adoptions any more due to the legalization of same-sex "marriage." However, Cuomo countered that that would be "discrimination" on the part of the organization if they refused to let same-sex couple adopt children:

PETER SPRIGG, SENIOR FELLOW FOR POLICY STUDIES, FAMILY RESEARCH COUNCIL: What we saw in Massachusetts, after marriage was redefined in that state, was – for example, that Catholic Charities, which had long been involved in the adoption business, was driven out of the adoption business because they had a conscientious objection to placing children for adoption with same-sex couples. Now, there was no shortage of other adoption agencies in Massachusetts who are perfectly happy to serve same-sex couples. But because Catholic Charities chose to operate on the basis of their convictions, they were forced out of business. That's the kind – that's an example of the kind of government discrimination, based on religious viewpoints, that this type of law would try to prevent.

CHRIS CUOMO: Why isn't that an example of discrimination by the religious? Obviously, a church, a synagogue – they don't have to marry same-sex couples if they don't want to, and no one is saying that they can. We are seeing that bubble up, as some would access, as a scare tactic, in the wake of this decision – that they'll lose tax-exempt status if they don't go along with it. But you say Catholic Charities – if you want to adopt babies and be part of that process, you have to be equal to all. That's equal protection. And if you don't do that, and don't respect the supreme law of the land, then you are the one discriminating. You're not being discriminated against. Fair point?

The social conservative guest answered that "if there is an established...right to same-sex marriage – or, perhaps, a right of same-sex couples to adopt – as long as that right is able to be exercised, then there should also...be maximum accommodation for people who have a conscientious objection to that...otherwise, you're simply using the coercive power of the state to try to force people to change their deepest religious convictions."

The anchor then retorted with his comparison of social conservatives to segregationists:

CUOMO: I don't see where it winds up coming involved with the free exercise of your right. It is not a part of being a Catholic to not give babies to gay people. That's – that's not part of the Catholic catechism. And that's the question that this law, as the religious freedom laws did – and it does smack familiar to what happened in the wake of the miscegenation laws and the civil rights laws, where people said, and they – some cited the Bible; some stated religion – and said, it's against my beliefs. I shouldn't have to participate. You know that's not how our law works here.

SPRIGG: Well, the problem with your premise, Chris, is you think that you have the right to dictate how someone else exercises their religion. And if you disagree with their expression of their religion or their – their particular convictions about how to apply their religious beliefs, then – then they shouldn't be allowed to apply it in that way. That's just not the way it works. Individuals and religions get to decide for themselves how – how to exercise their religious convictions.

CUOMO: Right, but we both know that your religion, my religion is the rule for you and for me, but not for all. You don't project your religious beliefs onto the behavior of others. We know that we can't do that in a pluralistic society. This just seems like a little bit sour grapes, and a little bit of trying to defy – which is okay culturally – but it is not okay when it's done in contravention to the supreme law of the land.

Cuomo exposed his ignorance of Catholic teaching (which he was supposedly raised in) with his claim about the catechism. Paragraph 2202 of that book defines the family as "a man and a woman united in marriage, together with their children," and that "this institution is prior to any recognition by public authority, which has an obligation to recognize it." A 2003 Vatican document issued under Pope John Paul II warned that children placed in the care of same-sex couples "would be deprived of the experience of either fatherhood or motherhood. Allowing children to be adopted by persons living in such unions would actually mean doing violence to these children, in the sense that their condition of dependency would be used to place them in an environment that is not conducive to their full human development. This is gravely immoral." In November 2014, Pope Francis reaffirmed the Church's teaching on marriage and family when he stated that "children have a right to grow up in a family with a father and a mother."

Near the end of the interview, the CNN journalist returned to questioning the need for the bill being considered in Congress. When Sprigg referenced a lawsuit against a Christian couple in upstate New York, Cuomo dropped another talking point of LGBT activists:

CUOMO: Where are these cases, though, Peter? That's what I'm not seeing. We all know about the one infamous – the pizzeria and the Christian baker. But do you really believe there is a reasonable expectation that if you want to get married to your partner – your same-sex partner – that you're going to use a baker who doesn't want to work with you, and then sue them – that you're going to seek out people who hate who you are and what you are or are opposed to it – for your own wedding? Do you really believe that this is going to be something that you have to protect against?

SPRIGG: Well, I just read an article in the newspaper this morning that in one of these cases involving the wedding industry – involving a reception at a farm in New York – that in fact, the same-sex couple actually recorded the conversation in which they called and requested the opportunity. So, this was not something where – I mean, it was obviously a set up. They were setting up a challenge. And this is the kind of thing that I think is inconsistent with our tolerant and diverse society, where – we should be able to have diversity in our views of marriage as well.

CUOMO: It's just dangerous when you get into selective tolerance. You don't hear this from so-called Christian bakers when it comes to second marriages or marrying adulterers or marrying people who don't want to have kids. All those things would be equal violations of what they say they say their free exercise is, but that doesn't bother them.