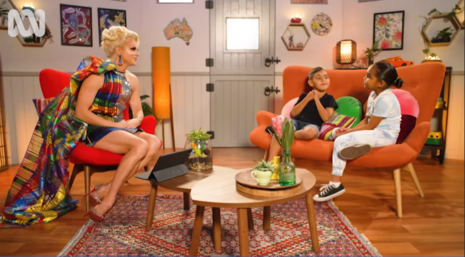 Pay no attention to what you have down under, kids, gender is fluid! Australian public broadcaster ABC, funded by Aussie taxpayers is culpable for the latest instance of the LGBTQ’s targeting and indoctrination of children.

Courtney Act, a drag queen made famous by RuPaul’s Drag Race, guest stars alongside elementary school children for a segment called “Little Kids, Big Talk.” The five-minute long video was posted to the ABC Kids Community Facebook page. The flamboyant man dressed as a woman engages in a back and forth with little children about “gender fluidity” and other nonsense such as pronouns and cross dressing.

Some parents let their child hang around with a mentally ill man, and allowed a video of it, which was posted on Friday, to reach 900,000 viewers so far.

One little boy very politely poses a question to the drag queen, asking whether or not people treat him differently “when you’re Shane,” referring to his authentic male identity. “They do actually, it’s quite interesting because when I am dressed up as Shane … I present looking like a boy and people treat me differently,” says the man cosplaying as a woman. “Regardless of how I look, the world looks the same to me, but sometimes people look differently and react differently to me depending on how I’m dressed.” The kids' questions are obviously scripted (or at least coached) and intended to draw out lessons for little viewers. A little girl asks, “Do you like being called a boy or a girl?” “I don't really mind,” he replies. “I find that as long as people are being kind and polite, then that is what is important. And I always find that whatever someone tells you that they want to be called, it’s always best to listen to them and call them the name that they want to be called.”

“I was a young boy and people told me that boys should look or act or even feel a certain way and I always enjoyed more of the things that the girls like when I was at school," Act tells a young girl. "And sometimes people said that boys shouldn’t like girls things and that boys should like sport and football and I preferred dancing and singing and colorful, fun things.” In a moment of solidarity with one of the boys who expresses his enjoyment of ballet, Act says, “ I think the world is changing and people are coming to understand that everybody, regardless of your body parts, should be able to do whatever they want to do.” Ignore biology, kiddos.

Many are celebrating this “stunning and brave” incorporation of LGBTQ pride within children’s entertainment. These nutjobs gleefully feed their children to the wolves as they exclaim “this is so beautiful.” One such parent gushed in a Facebook comment “Just brilliant!” and “Courtney is just lovely. Congratulations to the ABC. Love how they are so open and accepting. Gives me happy feels that their generation will normalize the Rainbow community.”

One individual commented “Freaking love how we are normalizing gender fluidity for the younger generation.” Freaking, indeed. Countless others with the same sentiment abound. Fortunately, however, many are outraged, one person commenting “This is disgusting. Little kids don’t need big talks. Let kids be kids and leave the perverted grooming out of it. Kids don’t need to learn about sexuality or sexual anything for that matter. Let them be kids and stop pushing agendas on the susceptible innocent.” Another said, #Letkidsbekids There is a place and time for people to pursue this sort of behavior and lifestyle if they want to and that's when they are adults. Please stop confusing children and influencing them to go down that path where they can ruin their lives.”

It's not “teaching tolerance,” it is abuse. If anything, children should be taught the harms of distorting true femininity and masculinity. It is more appropriate that we instill within them a holy fear of such immorality and unnatural behavior. Only then can there be a renewal within this increasingly decaying society.