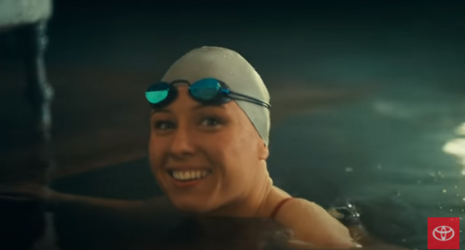 The 2021 Super Bowl ad from Toyota offered the most gut-wrenching yet uplifting story of Paralympic swimmer Jessica Long. The ad provides a swim-through of Long’s milestones starting in a Russian orphanage and ending as an adopted 13-time Paralympic gold medalist. Whether intentionally or not, the commercial serves as a testimony that every life matters.

We believe there is hope and strength in all of us. #LetsGoPlaces 🏊‍♀️: @JessicaLong pic.twitter.com/DpT76lFvDh

Toyota Newsroom posted an extended story on their website that emphasized aspects of Long’s life. In it, she explained how she came to answer the question she always asked herself: Why me? “This is why. You were always going to be able to share your story and inspire people on a whole different level.” Her statement speaks volumes on the ways lives turn out when they are given a shot. The video is cleansing when compared to most ads today.

The Toyota ad has received overwhelming support from even reliably left leaning voices.

An inspiring Toyota ad starring @JessicaLong aired during the Super Bowl tonight. Her personal story is nothing short of incredible. Hear from the U.S. Paralympian herself: https://t.co/ktxLE4N9Lv

A beautiful campaign about @JessicaLong and her incredible life story from @Toyota this year. This is the humanity we all need now more than ever. https://t.co/RsjCJqJ3zK

I’ve never been more moved than watching that Toyota ad

For a society that normalizes abortion, especially for unborn babies diagnosed with fetal abnormalities, this type of ad is rare. As a matter of fact, the first and last time a pro-life ad reached the Super Bowl in 55 years was back in 2010, when CBS broadcast an ad with Tim Tebow and his mother. Last year, Fox broadcast the 2020 Super Bowl and rejected a pro-life ad after months of negotiation with abortion survivor site Faces of Choice. But, the network had no problem making ad space for controversial issues including drag queens or politics … and don’t forget the show-stopping JLo/Shakira shake off.

There’s a clear double standard when it comes to airing controversial issues. It’s nice to finally see a Super Bowl ad that is supported by so many pro-choicers and honors the value of each and every life.

Society claims to be the voice of the voiceless. Look at the BLM movement or #MeToo. The ad showed the voice Long received when she was given a chance. Toyota tweeted the ad and affirmed, “We believe there is hope and strength in all of us.” In a world of life deniers, Toyota’s emphasis on all merits significance.

The end of the video left off with Long’s adopted mother saying, “It may not be easy, but it’ll be amazing,” which is a clear tribute to Long’s beautiful, life-affirming story. Something that is rarely seen or celebrated in the century of the woke.