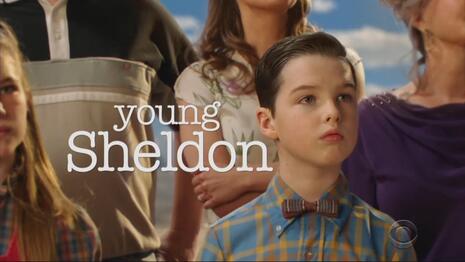 Despite all the changes from COVID-19, CBS’s Young Sheldon seems to be mostly the same. Namely, it continues to disparage religion, Christians, and even the very notion of God in the first place. This time around, the show compares God to an “invisible monkey” that doesn’t exist. For a show about a child genius, it’s a pretty dumb argument.

The December 3 episode “Bible Camp and a Chariot of Love” has Sheldon (Ian Armitage) reluctantly attending Vacation Bible School during the summer. There, he reunites with this rival Paige (Mckenna Grace) who outsmarts him in Bible trivia despite the fact that both of them couldn’t care less about religion.

He later studies the Bible with his sister Missy (Raegan Revord) who takes this time to ask Sheldon why he doesn’t believe in God. It seems like a silly thing to ask after three seasons of Sheldon clearly being an atheist to the point of “destroying” his pastor, but at least we get an answer. Sure enough, it’s the usual smug response that insists God, like an invisible monkey, doesn’t exist because science.

Missy: Can I ask you a question?

Sheldon: If it's "Who are three wicked women in the Bible?," then go ahead.

Missy: Why don't you believe in God? Sheldon.

Sheldon: Because science explains the universe without the need of inventing a supernatural being.

Missy: But how do you know for sure he doesn't exist?

Sheldon: The burden of proof isn't on me. If I said there was an invisible monkey in the room with us, you shouldn't believe me just because you can't prove me wrong.

Missy: Why is the monkey invisible?

Missy: Is it a ghost monkey?

Missy: Then why isn't he in heaven?

Sheldon: Because there is no heaven.

Missy: What about monkey heaven?

Sheldon: There is no monkey heaven. There is no regular heaven. When we die, we cease to exist. That's it.

I suppose the comparison is kind considering the show’s previous examples of hating Christianity, but it’s still more of the same. Since this argument never comes back again, I also have to assume this scene was just for the audience’s benefit. Just another reminder that God isn’t real and you’re an idiot if you think otherwise. How’s that for a sitcom?

This show was sponsored by commercials from Old Navy, Target, and Amazon.