When the horrific shooting in Vegas occurred last month, Hollywood rightly cancelled two movie premieres and edited at least one television show out of respect for the victims of the tragedy. But CBS’s Young Sheldon (a prequel spinoff of The Big Bang Theory) felt it was okay to air an episode, immediately after the shooting at a small-town Texas church, that depicted a small-town Texas church service with main character Sheldon (Iain Armitage) stating that he wanted to “destroy” his pastor to prove that God does not exist.

The fact that the show takes place in a small-town Texas church alone is similar enough to warrant placing a supportive message at the beginning or end of the show out of respect for the victims and their loved ones. But they couldn’t be bothered to do even that small gesture.

In the Thursday, November 9 episode, “Poker, Faith and Eggs,” Sheldon attends church with his family and is bothered so much by the obviously not-so-bright pastor’s message, that he felt the need to speak up in the middle of the service:

I have been a Christian all my life and I have never seen a priest or pastor explain faith the way this pastor did. Either it’s a deliberate, disrespectful attempt to make the pastor appear dim-witted and weak on faith, or it’s a sign that Hollywood has no idea what it’s talking about when it comes to matters of the Christian faith. Maybe a little bit of both.

And to have a young child wishing to “destroy” the pastor after the Texas tragedy that left 26 people dead, including more than a dozen children? Just gross. They probably didn't even make the connection, they were too busy tweeting about gun control and mocking people for their "thoughts and prayers." Completely insensitive, despite Hollywood’s claims to be all for sensitivity and tolerance.

At home, Sheldon starts researching scientists who believe in God. As he’s reading a book, he tells his sister, “French philosopher, mathematician and physicist Blaise Pascal argued a rational person should believe God exists because you have everything to gain if you’re right, and nothing to lose if you’re wrong.”

Suddenly, Sheldon’s mom rushes into the room to announce that she’s taking their father to the hospital. After Sheldon sees his father writhing in pain in his hospital bed, hooked up to wires and tubes with doctors and nurses working on him, Sheldon is visibly shaken up and immediately goes to the hospital’s chapel and folds his hands in prayer.

Older Sheldon’s voiceover then says, “Despite what it looks like, I didn’t pray to God that night. I prayed to Blaise Pascal. My thinking was, if he was right about the existence of God, then he could pass along my request for my dad to get better. If he was wrong…well…in this moment, I needed him to be right.”

This was a prime opportunity for the writers to show how difficult circumstances can often bring people closer to God, especially considering the tragedy in Texas. But promoting their anti-Christian agenda is far more important to them than showing any kind of respect for Christian believers, who most likely comprise much of their viewership.

It turns out that Sheldon’s father suffered a minor heart attack with no permanent damage, and his mother says, “Our prayers have been answered.” Older Sheldon then says, “For a brief moment, I was filled with the healing power of faith. Then the next day we all got violently ill…and I was over it.” 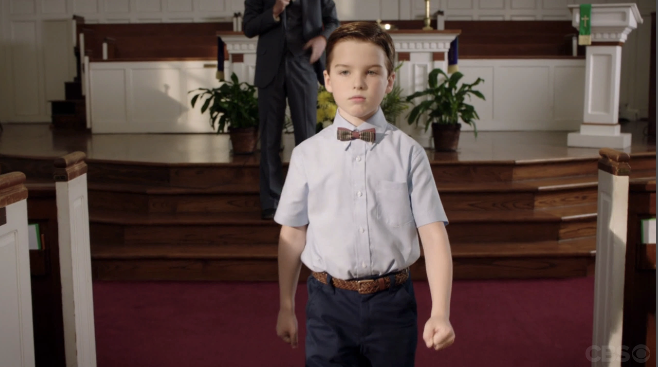 It’s sad that Hollywood leftists don’t understand how faith works. Job 2:10 reads, “...Shall we accept only good things from the hand of God and never anything bad?” The theology behind suffering and its redemptive power is too long to get into here, but God isn’t supposed to be a “sky fairy,” as atheists like to call Him, who works according to what we humans believe God should and should not do.

The show wasn’t done with the faith-bashing yet, unfortunately. We still had to witness one more scene of Sheldon in church disrespecting his pastor and interrupting the church service, challenging him on creation and the "big bang theory" - get it?

So, Sheldon got his wish. He is so brilliant that even his pastor, who doesn’t know how to defend the faith in the first place, can’t handle his questions, and Sheldon figuratively “destroyed” him. And rather than teaching Sheldon about respect, discipline, and proper worship, and answering his questions privately, as most Christian parents would, his parents fake another heart attack to escape.

The writers and producers of Young Sheldon owe the victims and loved ones of the Texas church shooting tragedy, as well as every Christian, a huge apology.

Understanding that Jesus suffered immensely and died for ALL of us, so that we could have the promise of eternal life if we simply believe, is a basic tenet of faith that most Christians know and defend well, especially pastors. It’s what brought those believers in Texas into their church on that fateful Sunday morning, it’s what brought those who died there to everlasting life in Heaven, and it’s what will bring those who survived peace and strength beyond all human understanding or ability as God carries them through the pain and suffering brought on by the unthinkable sin of another human being.

Hollywood, you’re missing out on something really special when you deny and disrespect faith. But it’s never too late to accept this free gift. All you have to do is believe.