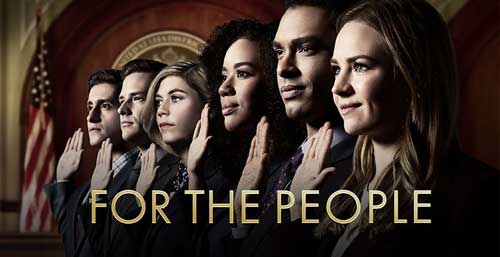 ABC’s For The People is the latest series by outspokenly liberal producer Shonda Rhimes, the same woman behind ABC Thursday night powerhouses Grey's Anatomy, Scandal and How To Get Away With Murder. Because apparently we didn't have enough diverse, attractive people spewing liberal speech in our faces in settings like hospitals, D.C. and law schools, we now have this show to insert Rhimes’s moral platitudes into the mouths of lawyers arguing before the federal court. First case up, racial profiling.

The March 13 pilot focuses on the new young lawyers working as prosecutors and defense attorneys for the Southern District of New York Federal Court. One lawyer, Sandra Bell (Britt Roberston), soon becomes involved with a high-profile case of a Muslim man attempting to blow up the Statue of Liberty. The prosecuting lawyer, Leonard Knox (Regé-Jean Page), argues the facts, that the man was found with a bomb with the intent to destroy a national monument, but Sandra quickly takes the argument down the path of FBI entrapment because…she thinks that can beat the fact that a man wanted to destroy a high profile symbol of America, I guess.

In all seriousness, she attempts to do everything in her power to shift the case from Islamic terrorism to the government “making” terrorists through profiling and tracking innocent Muslims. Never once does she offer proof that her defendant was not willing to destroy property or harm people, yet she still risks going to trial based her own bleeding-heart beliefs. This sanctimonious and narrow-minded goal climaxes with her final statement to the jury.

Sandra: "The function of law enforcement is the prevention of crime and the apprehension of criminals. Manifestly, that function does not include the manufacturing of crime." Chief Justice of the United States Earl Warren wrote that 60 years ago in a case that came out of this very courtroom, decided by a jury sitting in the same seats you're sitting in today.

It's easy to become distracted in a case like this. To become emotional. To focus on the wrong things. But this case is about one thing and one thing only. It is about the power of the United States government being used to systematically target and manipulate and incarcerate American citizens because of their religion, their ethnicity, their national origin, their color. It is an awesome power. But what you have today is even more powerful. You have the power to say no. You have the power to resist. In this courthouse, in this courtroom, in those seats today, you have the awesome power of justice... And there's nothing more powerful than that.

I am at a loss as to how the writers could type with a straight face about the risk “to become emotional” and “focus on the wrong things.” We’re watching a show with a 20-something lawyer trying to counter facts in a federal court with baby photos, and they have the gall to lecture us about catering to emotions and having the wrong focus.

Surprisingly, Sandra actually loses the case, with the jury finding her client guilty on terrorism counts, despite her “resist” mantra. Her supervisor Jill (Hope Davis) even comments, “This isn’t TV. You don't get a Muslim-American kid off charged with trying to blow up the Statue of Liberty.” However, since Jill also denounces “the government, the culture, the media, everything, and everybody” for that thinking, we’re clearly not supposed to take Sandra as the completely incompetent lawyer that she is, but instead blame American culture. At the end of the day, Sandra's initiative and idealism is all that matters.

Such is the run for a show produced by Shonda Rhimes. She has made no secret about her progressive leanings, from her support for Hillary to her status on the Planned Parenthood board. And she has made those political leanings known on her shows again and again and again. With over-motivated, under-moralized characters, a cursory understanding of culture outside blue states, and cliched political statements, For The People is poised to continue her network takeover on Monday nights. This might be one thing we have to #resist.