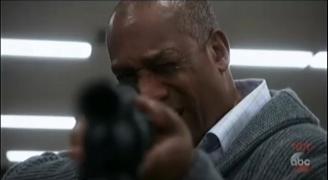 ABC’s Scandal has wasted little time in pushing a liberal agenda for its last season, but this latest episode admittedly is a change of pace. Instead of pushing diverse liberal heroes or peddling government handouts, the episode jumps straight into conservative-bashing. Gun owners beware, Scandal does not care for you.

The January 25 episode “Good People” fills in the details on the mystery of whether Olivia Pope’s (Kerry Washington) evil father Rowan (Joe Morton) really killed Quinn (Katie Lowes) whom he was holding captive. The flashback-heavy story even goes so far as to provide an explanation of where Rowan purchased the gun that allegedly killed Olivia’s former associate.

You see, over the course of the episode, Rowan assumes a different name and strategically befriends a local, pro-America blue-collar worker named Marv at a Sears-type store. They bond over their mutual hatred of "snooty D.C. types" and big corporations that hire overseas "giving our money to the Communists," as well as their time in the service.

Marv is so considerate when he hears Rowan is supposedly out of a job, his daughter with a baby on the way that he offers to buy anything Rowan needs at the store with his employee discount. All Rowan has to do is give him cash and "nobody will know that [he] set foot in the store." Just what Rowan wanted to hear.

He soon comes asking for a gun.

Rowan: Can I use your discount to get one?

Marvin: You want to get a gun?

Rowan: Of course. Baby coming. Safety and all. There've been break-ins in the neighborhood. I want my family safe. Wouldn't you? Don't you? You have guns?

Rowan: So can we do the thing where you buy the gun and I get the discount?

Marvin: See...that would mean that the gun would be in my name. I'd have to register it to me.

Rowan: Yes. And then in three months, we turn in the paperwork that says you're selling the gun to me, and we transfer the registration. Easy. It's taken care of. It's handled. Right?

Marvin: It's just... Getting a gun like that is kinda... it doesn't feel okay.

Rowan: It's fighting the corporate system. Same as ever. And isn't it our right to have our guns? I mean, taking away our right to arm ourselves is just what those snooty D.C. folk are waiting for. They take our guns, they take our freedom. I don't want to be out there with nothing to protect my family. I'm a man, Marv! Don't you want me to be just as much of a man as -- as you are? O-o-or... Is there some difference between us? I mean, is that something we should talk about?

Rowan: Yes, Marv. We are brothers.

Marvin: Come on, let's get you that gun. Maybe get something larger, too. Some real firepower to keep you safe.

Somehow people on Twitter thought this illegal fictional TV scenario was some profound commentary on gun culture in America. In fact, the actor, Joe Morton, who plays Rowan tweeted, "Anybody can buy any gun, anywhere, for any reason! Almost as easy as buying white-out, or vanishing creme … Insane!!!"

Yeah, except having a friend buy you some white-out isn't a felony. Having someone else buy a gun for you because you legally can't own one or don't want your name associated with the gun is an illegal straw purchase which is punishable by up to 10 years in jail and a fine of up to $250,000. Funny how they don't mention that part. Probably because they'd then have to admit that gun control laws don't stop bad guys from lying, cheating and stealing to get guns.

By the way, did I mention that this is a television show? Morton's character is holding his daughter's friend hostage because Olivia took away his dinosaur bone collection, but THAT'S what he's calling "insane?"

Then we have Rowan’s manipulation about race, “fighting the corporate system” and how the D.C. folks want to take away our guns. It’s just a friendly reminder of what these people really think about gun-owners, namely how dumb they are. Just sprinkle a few bumper-sticker phrases and a shallow “God bless America” sentiment, and gun apologists will just take the bait, so they think. But in reality, responsible gun-owners are far more well versed in gun laws than liberals and would immediately recognize this as an illegal straw purchase. Never mind the fact that real people want to use their real rights to protect their very real families. I dare the show to mock how dumb those people are to their faces.