'Grey's Anatomy' Teaches a Gun Control Lesson Nobody Needed: Don't Put a Gun in Your Vagina 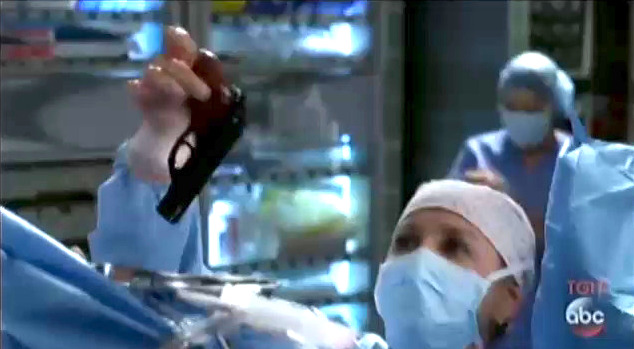 What did I just watch? I mean, I know I just watched the November 2 episode of Grey's Anatomy, "Come on Down to My Boat, Baby," but, in the larger sense, what did I just watch? It is truly amazing to me that this show is still on the air and, after this episode, I'm convinced that the only ratings it has are the people who watch it just to see what kind of insanity show creator Shonda Rhimes has in store for us each week. Certainly it's not because anyone needed to be taught this week's lesson - don't carry a loaded gun in your vagina.

18-year-old Danielle enters the emergency room of Seattle Grace Hospital because she passed out while going to visit her boyfriend in jail and now has abdominal pain as well. Upon examining her, her doctors think that a pregnancy is something to consider. After all, she's an otherwise healthy young woman who fainted. That's a reasonable assumption. Occam's Razor pretty much ensures that her doctors didn't consider the actual cause of her ailment. I'll be honest. It certainly didn't occur to me. It occurred to Shonda, though, and that woman has built a television empire.

Maggie: Danielle, so we know that you were at the prison when you collapsed. Do you have any previous medical history? Or are you taking any medications?
Danielle: No. No. Look, I'm fine. Seriously. Can I just go, please?
Arizona: No, you still have abdominal pain, and you fainted, so I'm a little concerned that you might be pregnant.
Danielle: Well, I'm not pregnant, okay? I fainted because -- because of the heat. There wasn't any air in there -- Ow!
Mr. Nelligan: Please. Just run some tests.
Miranda: I can't do that, Mr. Nelligan, because I don't believe there's anything wrong with you.
Arizona: Any nausea or vomiting?
Maggie: Did you swallow something? If she was smuggling something into the prison, it may have burst.
Arizona: If you swallowed something, Danielle, you need to let us know. Otherwise, you could get very, very sick.
Danielle: I didn't swallow it!
Mr. Nelligan: I've been shot! I've been shot! I've been shot!
Miranda: Stay down! Don't move! -Security! Is everyone all right?!
Maggie: Abdomen!
Arizona: What?!
Miranda: Who the hell fired?!
Maggie: April, you're bleeding!
April: Huh? No, I'm fine. I'm fine. It's -- It's nothing.
Arizona: Okay. Danielle. Do you have a gun on you? Wait. Hold on. Hold on! This is -- This is an exit wound.  No entrance wound. Danielle, did you put a gun in your vagina?

I assume that, after watching that, you have joined me in wondering, what did I just watch?! I have a lot of questions. This isn't the first time I've questioned the anatomical knowledge of the team at Seattle Grace, but are the writers of the show under the impression that a woman's privates are a place that one can simply place a gun? They have a gross misunderstanding of the size of one of those things. Does Gwyneth Paltrow know about guns in vaginas? Women aren't really allowed to put weird things in their lady bits without her covering it on her lifestyle blog, and this one seems to have missed her vaginal radar.

Now, assuming that Gwyneth Paltrow was okay with it and a gun was actually an object that was smuggle-able by that particular method, why would she load the weapon? Why wasn't the safety on? That's just poor gun safety.  Shonda Rhimes under the impression that gun safety is such a problem in America that we needed an episode telling women not to place loaded firearms into our special place, or does she think women are just that particularly stupid?

Now, let's talk logistics. It would take roughly five pounds of pressure directly on the trigger to fire that weapon. They couldn't have gotten to the trigger by feeling her abdomen and they certainly weren't pushing with that kind of weight. So, how on earth did the trigger get pulled while the gun was in residence inside of her body?

After Danielle has surgery to repair the bullet wound from when a gun went off inside of her vagina because she put a loaded firearm inside of her vagina, you guys, the doctor announces that it is a "beautiful 1-pound, 8 ounce... baby pistol." For the gun aficionado out there, that's about the weight of a Glock 19, which I feel confident would not fit in one's lady holster. The doctors then have the bizarre experience of telling her, "Do you have any idea how badly this could have gone? You shot yourself in the belly from inside your vagina, and that was the best-case scenario. You could have shot yourself in the spine. Or you could have shot someone else in the head."

Shonda, I know you're not into guns. You've made that clear. If you were under the impression you were going to change anybody's mind by having a woman accidentally shoot herself from inside her vagina, though, I'm afraid you've only served to make us ask once again - what did I just watch? And I guess that's what keeps so many tuning in week after week.