ABC Drama Claims 'Racism is Built Into the DNA of America' 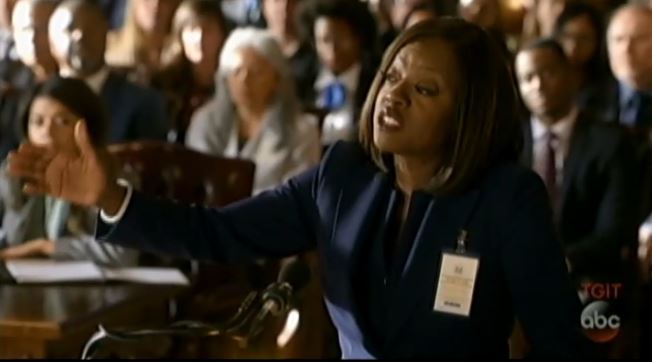 How to Get Away WIth Murder has some pretty interesting ideas on race in America. In the March 1 episode "Lahey v. The Commonwealth of Pennsylvania," Annalise Keating (Viola Davis) is headed to the Supreme Court with a big class-action judicial reform case alleging inadequate public representation for black and underprivileged defendants. Being a Shonda Rhimes show, this was an excuse for race-baiting comments.

In her opening arguments, Annalise introduces race-based arguments, and some of the justices don't want to allow it. She quickly has one of the lawyers on her team pull some more information and gets ready for a rebuttal. It ends up being a leftist's dream speech.

Annalise: Racism is built into the DNA of America. And as long as we turn a blind eye to the pain of those suffering under its oppression, we will never escape those origins. The only safeguard people of color have is the right to a defense, and we won't even give them that. Which means that the promise of civil rights has never been fulfilled. Due to the failure of our justice system, our public defense system in particular, Jim Crow is alive and kicking -- laws that made it illegal for blacks and whites to be buried in the same cemetery, that categorized people into quadroon and octaroons, that punished a black person for seeking medical attention in a white hospital. Some may claim that slavery has ended. But tell that to the inmates who are kept in cages and told that they don't have any rights at all.People like my client, Nathaniel Lahey, and millions of people like him who are relegated to a subclass of human existence in our prisons. There is no alternative to justice in this case. There is no other option. To decide against my plaintiff is to choose lining the pockets of prison owners over providing basic defense for the people who live in them. And is that the America that this Court really wants to live in? Where money is more important than humanity? Where criminality is confused with mental health? The Sixth Amendment was ratified in 1791. It's been 226 years since then. Let's finally guarantee its rights to all of our citizens.

We are a country with an imperfect history but, more than any other country in the world, the concept of all men being created equal is built into the DNA of America. Civil Rights in America have made incredible strides in the past decades and all Americans are equal under the law. To say that Jim Crow is alive and kicking is patently false, despite how often the left likes to use that comparison.

Judicial reform is an important topic, far too important to be cheapened by comments like these. America is a land of opportunity for all, even on HTGAWM, where we see a black female lawyer arguing before a Supreme Court that contains black and female judges. Her points don't hold a whole lot of weight when her own life disproves them.