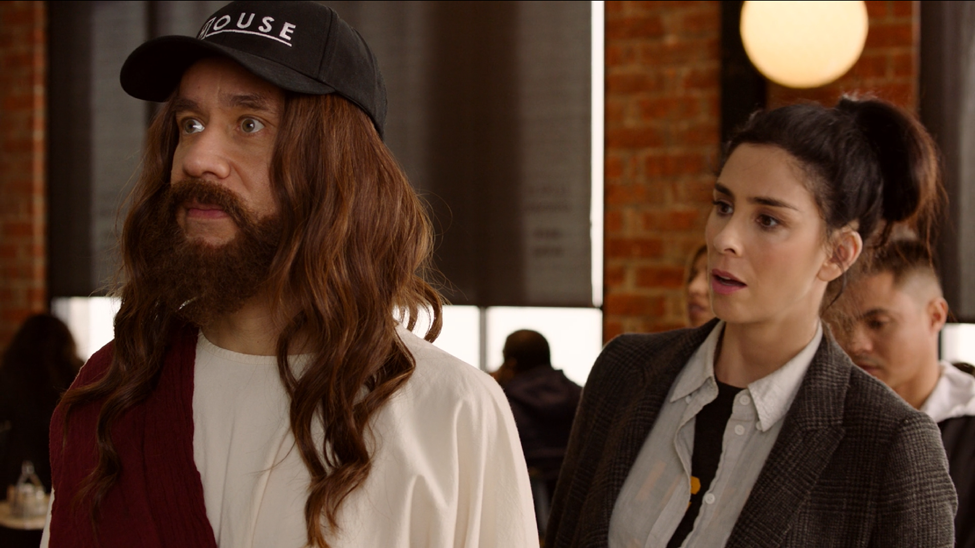 Finally unburdened by idea of connecting with people on the other political side, comedian Sarah Silverman gleefully mocks those in conservative media in the finale of her Hulu show I Love You, America, alongside the traditional mocking of Christians and Jesus Christ, of course. Merry Christmas, everyone!

Sarah is quick to go off on the “manufactured war” on Christmas. She shows a clip of President Donald Trump’s quote about how “we’re all going to be saying ‘Merry Christmas’ again.” I guess in her mind saying “Happy Holidays” triggers Christians like saying, “It’s okay to be white” triggers college students, except I don’t see Christians calling the police on Starbucks in terror.

But that all pales in comparison to the special shout-out Sarah gives to the conservative media, including NewsBusters and the Media Research Center, implying we are anti-Semitic.

Silverman: Let’s break down this war on Christmas - and to my friends at Fox News, Breitbart, the Media Research Center, NewsBusters, and the Blaze and all the real news outlets covering this devastating war, when you write your weekly “don’t think” piece on my monologue, gluing together words and phrases that fit your narrative, include this next part: What is it about Christmas that you think that Jews hate? The no traffic? The vacation days, the gorgeous lights lining the streets of the houses and the shopping squares...

She seems to be referring to last week’s piece which grabbed a lot of attention, in that I called out her ridiculous “shaken” feelings upon seeing an American flag. Now she assumes that means I and everyone here at NewsBusters think all Jewish people hate Christmas and things related to America. With this bizarre logic, I guess I can assume Sarah hates all Christians. After all, she insults my pieces (and I am a Catholic), bashes Christians who like to say "Merry Christmas" and mocks Jesus. Fortunately, unlike her, I don’t think one person represents an entire race, religion, or gender, so I don’t believe she hates the 2.2 billion people who ascribe to Christianity.

She goes on to mock the maybe two people who still care about the Starbucks holiday cup situation, saying, "What do you need? What would make you happy? A bleeding Jesus on the cross on the cup or maybe a close-up of, like, Mary crowning?"

Speaking of Jesus, she also disrespects the image of the Christian Lord and Savior. There's a sketch of Sarah meeting up with Jesus Christ (played by Fred Armisen) at a sandwich shop. Keep in mind, this is a woman who did a whole bit about having sex with God. (Why not Mohammed, I wonder?) The joke, if you can call it that, is that this Jesus is a House-watching, Wayne’s World fan with mostly liberal opinions.

Abortion: "I'm against it. But that's just me. I'm also against the squishing of the tiniest bug, so whether or not you squash a bug or kill an animal, or have an abortion, that's up to the individual."

NFL Kneeling: “What a beautiful way to get your voice heard.”

Health care: “Well, if someone’s sick, you take care of them, right? Oh, but right, this is the country where if you’re poor, they let you die if you’re sick.”

Offering "thoughts and prayers:" “I have to say it drives me crazy. Because a prayer is just a thought, right? But it starts with 'Dear Lord or Dear God,' so you're acting like you're doing two different things."

Silverman: "Yeah, right. They're trying to get credit for two in one."

Jesus: Right. "Just do the one. Second of all, how long does a prayer take? Six seconds? Would it kill you to call your legislator?"

For someone who insists even in this episode that she wants to be “open” and “find common ground” with others, Sarah Silverman has moved further and further away with each passing episode. Long gone are the days of trotting out Trump supporters for even the slightest bit of credibility. She is perfectly content with fear-mongering against the president, mocking traditions, and openly supporting liberal candidates. I doubt she is any closer to understanding a right-wing opinion than anyone watching her show would be. In fact, based on this episode alone, I think it’ll only get worse.

In spite of that, I wish her and anyone who comes by this page thanks to her plug a Merry Christmas and Happy Hanukkah and whatever other observations are made this time of year. That is finding common ground.