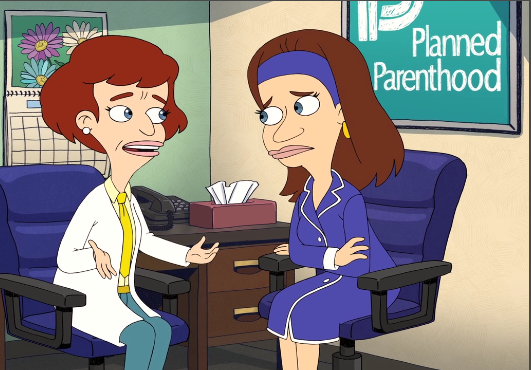 I sat through all ten episodes of the second season of Netflix’s Big Mouth, an animated adult sitcom, so you don't have to and all I can say is, that is five hours I’ll never get back. You're welcome. I honestly don’t know why this series was brought back for another season unless it was to simply appease the liberal universe with their 30-minute ode to Planned Parenthood.

Season two began streaming October 5 and continued inappropriately exploring puberty and sexual themes for its tween characters. Episode 5, titled “The Planned Parenthood,” was the most obnoxious, especially for anyone in the pro-life community. The entire episode was devoted to convincing twelve and thirteen-year-old students on the merits of Planned Parenthood.

Coach Steve (Nick Kroll) is newly sexually active and boasts about it to the sex education class he is teaching. To say that Steve is a bumbling idiot is being kind. When he admits he didn’t wear a condom during his first sexual experience with a woman, even the students were speaking up about the importance of doing so.

As STDs and unwanted pregnancies were brought up, one student suggests that Steve go to a Planned Parenthood for more information. When he asks, “What’s Planned Parenthood?” Jay Bilzerian (Jason Mantzoukas) answers, as many of us would, by saying, “It’s an abortion factory.” He says he was told that by his father, a lawyer who regularly drops his receptionists off there. Ugh. Two of the girls, Missy Foreman-Greenwald (Jenny Slate) and Jessi Glaser (Jessi Klein), gave credence to the standard liberal feminist line that Planned Parenthood provides cancer screening and "they save lives." Jay’s response is to ironically question, “By killing babies?”

The episode progresses to various sketches promoting Planned Parenthood. Andrew’s (John Mulaney) mother daydreams about her younger days and we follow her hooking up with a one night stand, discovering she's pregnant, going to Planned Parenthood for an abortion, and getting into a fender bender with the man who turns out to be Andrew's dad on the way home, all while the upbeat song “Groove Is in the Heart” plays.

In another scene, a skit acted out by the class is set in the future, with a Star Wars-like opening reading: "The year is 2126. The evil Lord Bilzerian has declared women’s healthcare 'gay' and outlawed all Planned Parenthoods. Luckily, an elite medical team travels the galaxy, helping women in need. Led by Captain Missy Foreman-Greenwald, the are ... The Vagilantes."

The first call for a PAP smear comes from “Texania,” which is described as Bilzerian territory and is a not very thinly veiled slap at Texas, a state known for strict abortion laws. The spaceship shrinks down small enough to travel into a woman’s vagina to perform exams and procedures. Yes, it is this stupid. Once inside, a team of all male Bilzerians appears and tries to fight off the spaceship until Missy explains "the majesty of the female reproductive system," which the Blizerians realize creates boys. The Bilzerians decide to “protect these beautiful factories for male excellence.” Obviously, the intent is to paint the men as misogynists unconcerned about anything but populating the male species.

Gay student Matthew (Andrew Rannells) describes pregnancy in terms of a tuna melt. Yes, a tuna melt. “Babies are like tuna melts. They sound good, but do you really want one right now?” What? No clump of cells? After all that, Matthew then goes into a skit featuring himself as the host of a show called “Miss Conception,” a parody of The Bachelor reality show. The female student contestant is Leah who is 16 years old and doesn’t want a tuna melt or a baby so she's on the show to meet the perfect contraception. After they go through birth control for women, Nick’s dad comes to the classroom to talk about his vasectomy for the boys.

The ending of the episode gets to the point – it was intentionally controversial. Replicating the end of a Saturday Night Live show, the various characters stand on stage while the host thanks everyone for their help, including "the Liberal League for their awesome agenda. You convinced us to do an episode on Planned Parenthood even though so many people are gonna be furious at us for doing it.” At least the creators are honest that it is simply a cheap exercise in liberal advocacy.

The show creators previewed the Planned Parentood episode and Episode two as the most controversial. Episode two, titled “What Is It About Boobs?” shows Jessi and Missy being treated to a day at a Korean spa by Missy’s hippie-dippie mom, Shannon, who is divorcing Missy’s father for her new girlfriend. The big "controversy" in this episode is that the bodies of the women using the spa are drawn as normal women look, at least to the animators. Flackett said, “Even for our animators, they don’t animate women’s bodies like that. That was its own kind of moment. I remember the first time we saw it. It was a lot. You were like ‘Wow! I don’t think I’ve ever seen this before.'” The women are drawn with all kinds of body types and they realistically show pubic hair as well. It’s all about reassuring the insecure pre-teen girls going through puberty that all human bodies are beautiful.

The show creators managed to work in their love of Barack and Michelle Obama into Episode 6, titled “Drug Buddies.” Jessi is applying some peer pressure to get Nick to eat some of her father’s marijuana-laced edibles. He is reluctant so Jessi says, “Barack Obama smoked weed. He was our best president and his wife is perfect. Oh God, don’t you miss them?” Nick replies, “Every day. Their daughters, that dog…” Good heavens.

Towards the end of the episode, the Shame Wizard mentions to Jessi that she should have been more aggressive volunteering for Hillary Clinton. “If you made a few more phone calls… who knows?” Well, we know, don’t we? The additional phone calls wouldn’t have mattered. She ran a bad campaign that somehow managed to ignore going to Wisconsin, for example, that sealed the fate of her electoral loss.

And, just in case you weren’t certain that the show creators are liberal in their political views, in Episode 8, titled “Dark Side of the Boob,” Jessi lies to Nick so the Shame Wizard shows up and says to her, “You know how I can tell you are lying? You look like Mitch McConnell.” C’mon. Talk about a random bit of dialogue just to take a cheap political shot at a conservative leader.

I highly recommend you skip this waste of time of a show. Life’s too short for meaningless liberal lecturing labeled as a sitcom. Especially as they use animated pre-teen characters to deliver the message. Hard pass.