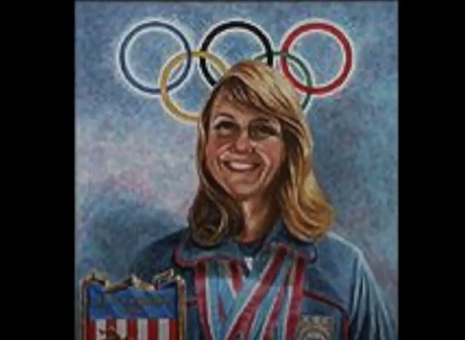 Hogshead-Makar, now a civil rights attorney and the chief executive officer of the Champion Women advocacy organization, said she “wholeheartedly" disagrees with Thomas’s presence in women’s swimming, and recognizes that trans athletes “have a significant advantage over biological women.”

Defending the integrity of women’s sports, Hogshead-Makar (seen in above painting) said, “We’re hoping that we can get sports governing bodies and legislatures and others to care more about fairness than any other conclusion. After somebody has been through male puberty, you cannot roll that back. So, it isn’t fair.”

Several U.S. states have passed legislation to protect women’s sports. Sports governing bodies, such as the NCAA and Olympic committees, however, are totally woke and allowing the competitive balance in women’s athletics to be destroyed.

Unlike woke dreamers, Hogshead is standing up for biology and women’s sports, telling TMZ:

“I affirm who [Lia] wants to be for all of her life. Whether it’s employment, the classroom or anyplace else. But when it comes to sports, sports is not based on identity. It is based on biology. That is why we have the women’s sports category.

“If sport is not based on sex segregation, and if gender identity equals sex discrimination, we might lose the right as woman athletes to be able to have separate sex sports.”

Female athletes should not have to be “gracious losers” to males, the former Olympic champion added. Women can’t compete with men by training harder, eating healthier or finding better coaches either. “You can’t outrun biology”, Hogshead-Makar said. She also retweeted a message by Dr. Ross Tucker, a sports physiologist who said, “The reduction in testosterone did not remove her (trans males) biological advantage.”

The future of women’s sports can only be damaged, Hogshead-Makar further remarked. Women may lose the right to have their own separate events if men continue to filter into teams, if world and national sports governing bodies allow the trans madness to continue.