Brave Rugby Players Take a Stand Instead of a Knee 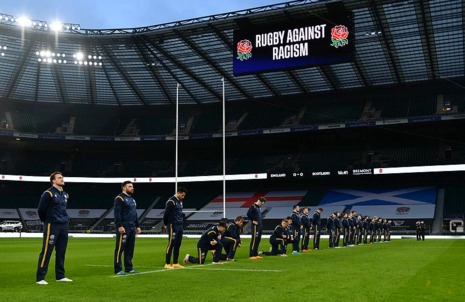 Since the death of George Floyd, Black Lives Matter has dominated the cultural space and even foreign sports teams couldn’t escape the madness of the "anti-racist" movement.

At last Saturday’s Six Nations tournament, the entire Ireland rugby team and 21 players from the England and Scotland teams refused to kneel for the Rugby Against Racism campaign before kickoff.

Among the standing athletes was English player Billy Vunipola, who famously refused to take a knee in November when the team beat Georgia 40-0 in the Autumn Nations Cup. In an interview with The Good, The Bad And The Rugby Podcast, Vunipola, who is of Tongan descent, explained at the time that he would not kneel because as a Christian he does not agree with the values of Black Lives Matter and the culture they support. “What I saw in terms of that movement was not aligned with what I believe in,” he said. “They were burning churches and Bibles. I can't support that. Even though I am a person of colour, I'm still more a person of, I guess, Jesus.”

In November, Vunipola was joined by just two fellow teammates, Ben Earl and Henry Slade. While Slade chose to kneel on Saturday, Vunipola and Earl were joined by four more of their teammates along with more than half of the Scottish team and all of the Irish team.

Unlike many American players, Vunipola and others who refused to kneel have received a lot of institutional backing. Scotland’s coach, Gregor Townsend, claims he "100%" supports his players' decision to stand instead of kneel. Similarly the Rugby Football Union made a statement in November defending its players choice:

“England’s men’s and women’s players and match officials are given the choice on how and if they wish to make gestures to help raise awareness for diversity and inclusion before the start of each game. 'The RFU supports any players’ decision and equally believes the plans off the England stage are as important in driving necessary improvement and change across all areas of our game.”

These European athletes’ choice to respectfully stand against racism rather than kneel and support Black Lives Matter is a breath of fresh air compared with the climate of American sports teams over the last year. In the wake of BLM riots and the aftermath of George Floyd’s death, the few athletes who chose to stand were often harshly criticized and accused of participating in racism. Sport by sport, season by season, from basketball to baseball and from soccer to football, the last six months have seen athletes at every level take a kneel in support of BLM and “anti-racism.”

Hopefully, the European Rugby players’ choice to stand in solidarity instead of kneel to BLM will rub off on American players and give them the courage to take a stand instead of a knee.