Don’t do groupthink? Sports Illustrated’s Dan Gartland will judge you. He’ll even lecture you about your Christianity. 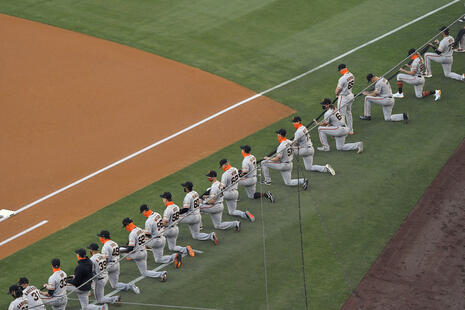 Gartland tells readers, “Every player and staff member from four MLB teams took a knee before last night’s opening slate of games to make a statement about inequality. Every single one of them—except Giants reliever Sam Coonrod.”

This is unacceptable to Gartland. They were all kneeling for a “a recorded, uncontroversial message from Morgan Freeman.” It was a “carefully constructed display coordinated and approved by Major League Baseball.”

In other words, it was at best a shallow gesture, a nod to the current zeitgeist. But political theater is sacred these days. We’re all supposed to pretend that we’re hopelessly divided by white racism before we make a show of having accepted the lie and doing our penance for “unity.” It’s the wise way to go if you don’t want to stand out “like a sore thumb,” as Gartland says Coonrod did.

Gartland is outraged: “Asked to explain himself after the game, Coonrod hid behind his religion.”

“Hid behind his religion.”

“I meant no ill will by it. I don't think I’m better than anybody. I’m just a Christian. I believe I can’t kneel before anything but God, Jesus Christ. I chose not to kneel. I feel if I did kneel I'd be a hypocrite. I don’t want to be a hypocrite.”

Get ready for Gartland’s lecture:

You “dont go to church much anymore?” Gosh Dan, didn't see that coming. And thanks for explaining Christianity to us all. We sometimes forget that the left regards Jesus mostly as a community organizer. Except scripture doesn’t say anything about taking part in sham dog-and-pony shows. And I don’t know the first thing about Coonrod -- and I bet you don’t either. He may spend his off-days volunteering at soup kitchens. He may be a selfish a-hole.

But there are a lot of people out there who will kneel to nobody but God. You can call it hiding. We used to call it being American.

Gartland is really upset that Coonrod is sticking to his religion and declining to take part in the secular progressive liturgy MLB constructed (they even got “The Voice of God” for the event!). Gartland can sneer all he wants, but Coonrod displayed courage and honor. That made him stand out like a sore thumb.