UPDATE, 2:12 p.m. Eastern: The NBA seems to have other ideas, releasing a statement Feb. 10 from Chief Communications Officer Mike Bass: "With NBA teams now in the process of welcoming fans back into their arenas, all teams will play the national anthem in keeping with longstanding league policy." 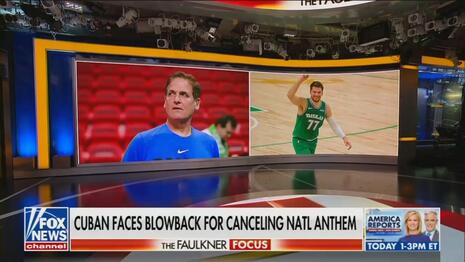 Oh say, can the Dallas Mavericks not see by the dawn's early light what so proudly we hailed at the twilight's last gleaming? No, they cannot. And they will not. The National woke Basketball Association team is now refusing to honor America by playing the national anthem at their home games. Will the SJW sheep in pro sports follow their lead?

The New York Post’s Scott Fontana quoted Dallas owner Mark Cuban saying that if the “National Anthem Police,” don’t like it they should “complain to your boss and ask why they don’t play the National Anthem every day before you start work.”

Cuban defends his team’s right to engage in “nonviolent protest of systemic racism in the United States … .”

Dallas has not played the Star Spangled Banner at any of its home games this season, but the media just caught on to it this week.

The highly controversial owner of the Mavericks “has been vocal about his support for those who wish to kneel during the playing of the national anthem, the practice which former 49ers quarterback Colin Kaepernick began in 2016 and which became a lightning rod for partisan political debate,” Fontana wrote. Cuban told ESPN that if his players respectfully took a knee, “I’d be proud of them.”

Fontana noted that NBA Commissioner Adam Silver previously threw out the rules requiring players to stand during the playing of the anthem. He prefers to support “his players’ decisions to express themselves.” In December, Silver said: “I recognize that this is a very emotional issue on both sides of the equation in America right now, and I think it calls for real engagement rather than rule enforcement.”

Forbes’s Shlomo Sprung wrote the Mavericks are believed to be the first team in North American professional sports to discontinue playing the Star Spangled Banner.

NBA spokesman Tim Frank said, “Under the unique circumstances of this season, teams are permitted to run their pregame operations as they see fit.”

On Fox Sports show “The Undisputed,” ever-woke Shannon Sharpe (see him at left in above photo) said, “I’m perfectly fine with the decision. … Skip (Bayless), we gotta stop with this notion that gestures and symbols is a form of patriotism. Actions, deeds make you a patriot. Just because you fly a flag over your house don’t make you a patriot. … I’m sure those people who went up to the Capitol on Jan. 6th consider themselves patriots. … That flag is not a true representation of America! … Tell me when all lives mattered since 1619!” Sharpe also said they took prayer the Pledge of Allegiance out of schools, and the schools are still doing fine. “Sporting events will be just fine.”

Bayless called Cuban “an egomaniac addicted to attention, and he knows full well this will create a national firestorm of controversy that will surround Mark Cuban with more and more attention. … It’s still a uniting bond to stand before every sporting event and respond to that anthem however you feel like it … and I hate to lose that tradition across the board.” It’s not Cuban’s right to take it away, Bayless said, adding Cuban told the Washington Post it’s not a final decision to ban the anthem.

And the National woke Basketball Association wonders why the Feb. 3 broadcast of two games drew less than a million viewers, one of them less viewers than a television show titled “My 600 Pound Life”. Less than professional wrestling, too. It was a prime time basketball game on ESPN between the Indiana Pacers and Milwaukee Bucks which attracted an abysmal audience of 701,000 television viewers. A second NBA game on ESPN that same night also drew fewer than a million watchers. The AEW pro wrestling broadcast also beat the NBA that night.

The sinking NwokeBA might want to retain a part of the national anthem for its new tagline -- “the twilight’s last gleaming.”