New York's Cardinal Dolan seems to think that President Trump is doing a good job at leading the country through the coronavirus crisis, and though we know there are many Catholics who would never do such a thing (the Obama-voting ones, we’re sure) Dolan also praised the pro-life and pro-religious freedom President for his outreach to religious communities during his administration. 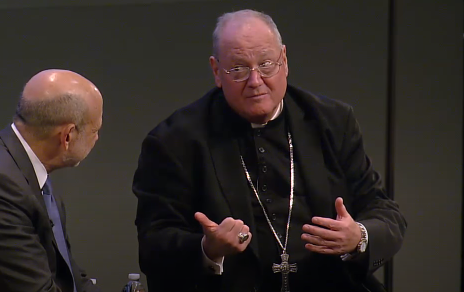 The leader of the Archdiocese of New York appeared on Fox News on Monday, April 27, to relay the issues facing the Catholic community, in particular parochial schools. But he also took time to thank President Trump for his leadership.

“I really salute his leadership,” Dolan told the hosts of Fox & Friends. He also thanked New York leaders, Governor Cuomo and Mayor Bill de Blasio but went out of his way to mention that Trump had really been supportive of the religious community during this pandemic.

“Everybody has really come through, but the President has seemed particularly sensitive to the, what shall I say, to the feelings of the religious community,” the cardinal mentioned.

Dolan’s comments come after a conference call between Church leaders including the New York cardinal himself, the President of the U.S. Conference of Catholic Bishops Los Angeles Archbishop Jose Gomez, Boston’s Cardinal Sean O’Malley and President Trump. The discussion covered a number of Church and community issues following the outbreak of the pandemic, in particular Catholic education.

Dolan led the conference call, urging the President to consider the plight of private Catholic schools, stressing that “parental rights, educational justice and civil rights of our kids” suffer if schools suffer. The bishop also thanked the President for his “courageous insistence that the nonprofits, faith communities, and our schools be included” in the recent pandemic stimulus package.

Of course, the President appealed to his pro-Catholic record in true Trump form, reminding the Church leaders during the call that he’s been “the best [President] in the history of the Catholic Church.”

Though considering his contributions to the pro-life community -- being the first President to speak at the March for Life in 2020, enforcing the Title X provisions that pushed Planned Parenthood off some government subsidies, standing against the radical left’s bloodthirsty late-term abortion policies -- and his favor with the larger Christian community, he has a point.

President Trump has also made acquiring Catholic voter support a bigger focus for his re-election bid. Earlier this month, the Trump re-election campaign launched the “Catholics for Trump” initiative aimed at courting more catholics with his “religious-freedom record and anti-abortion policies.”

At the end of their conference call, the President referred to Dolan a “great friend of mine,” and the cardinal replied “the feelings are mutual.” And while we can write it all off as political, it is a welcome change from the usual scene of liberal Catholic leaders ignoring Trump’s great pro-life record to hit his attitude on immigration and climate change.