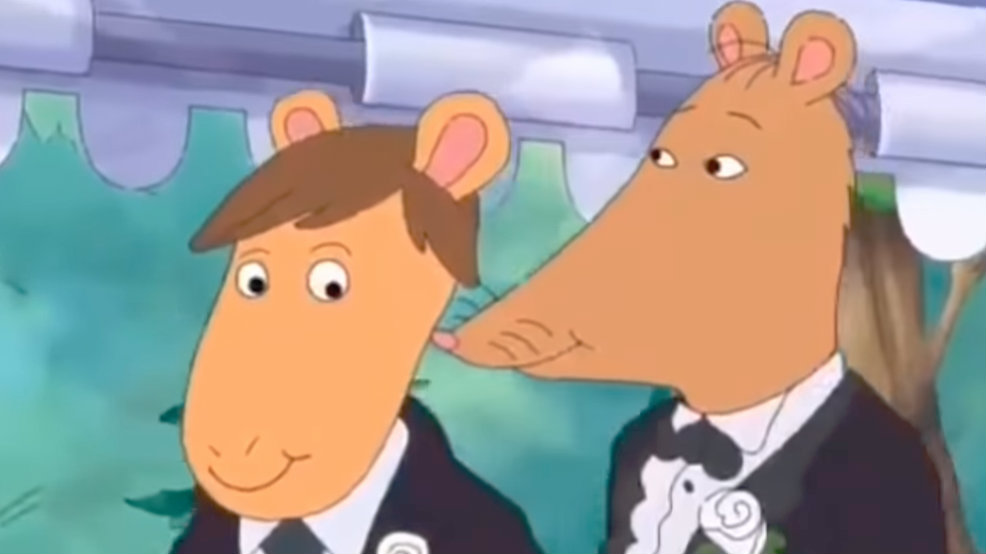 Some say that if a hero lives long enough, they’ll eventually see themselves become the villain. Well, that certainly can be said for PBS children's classic Arthur. The show, now in its 22nd season, has taken beloved character, Mr. Ratburn, and made him gay. In the season premiere, the 3rd grade teacher and male role model for Arthur and his gang said “I do” to a male anthropomorphic muskrat (or something) in a wedding ceremony attended by his students. As one character exclaimed, “It’s a brand new world.”

Huffington Post published a story on the episode, joyful that Arthur creators were finally brave enough to embrace such a storyline after years of dodging LGBTQ issues. Apparently in 2005, the show retracted an episode involving lesbian mothers following a backlash.

But it’s 2019 and by the looks of it, it definitely is a “brand new world” for the humanoid aardvark and his suburban-dwelling animal friends. In the episode “Mr Ratburn & the Special Someone,” Arthur investigates rumors of the existence of the teacher’s sweetheart, someone he and his friends initially perceive to be a “bossy” woman played by Glee actress Jane Lynch.

But as Arthur and his gang soon find out, appearances can be as deceiving as society’s old-fashioned tropes on sexuality. Oh, those idiots. Let’s give them — and the impressionable youngsters watching “harmless” public broadcast TV — a little dose of rainbow reality. To Arthur’s shock, the annoying shrew he thinks Mr. Ratburn is marrying, turns out to be his sister. But that begs the question: Who then is he actually marrying?

To the delighted shock of Arthur and his friends Francine, Muffy, and Buster, Mr. Ratburn walks down the aisle at his wedding ceremony revealing his male beloved. The creators of the show drag it out like some sort of grand reveal that ultimately feels insidious rather than celebratory. As Arthur and his friends stare in disbelief, the homosexual newcomer gives them a cheeky wink which seems to say, “Get used to it, kids.”

Though, this is PBS, so Arthur isn’t uncomfortable in the least. After all, this is the way things should be. He smiles, relieved after the reveal that Mr. Ratburn isn’t marrying some overbearing woman, but a man who makes him happy. As he and his friends enjoy cake at the reception, Arthur exclaims, “Mr. Ratburn is married. I still can’t believe it.” Francine responds, “Yep. It’s a brand new world.” Following that, Mr. Ratburn and his betrothed are shown doing campy dance moves on the floor, with Fran adding that that’s something teachers “should never do.” Nice stereotype.

Twitter was impressed by the bravery of this episode. Rachel Giese, editorial director of LGBTQ news site Daily Xtra tweeted, “It turns out Arthur is more courageous and explicit than Avengers: Endgame when it comes to LGBTQ2 lives and storylines. Congrats Mr. Ratburn! Your move, Marvel....” Another, Andrea Cee, wrote, “Mr. Ratburn is the gay icon I never knew I needed.” Let’s just say that Arthur has officially overstayed its welcome.