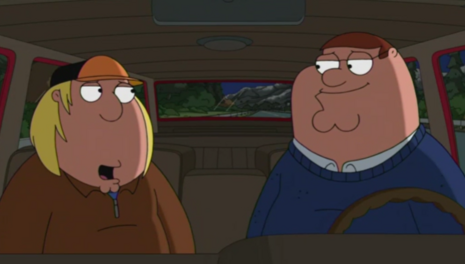 During a time when illegal mobs are harassing conservative Supreme Court justices in front of their homes, Fox's Family Guy took a swipe at Supreme Court Justice Brett Kavanaugh.

In the episode, Peter's son, Chris, announces that he met a girlfriend at camp who lives in Canada.

Peter doesn't believe Chris's story and drives up to Canada with his son to prove it. While in the car, Peter confesses to Chris that he invented a fictional Canadian girlfriend when he was in high school because he was a loser. Then Peter's dialogue mocks Brett Kavanaugh.

Peter: Eventually, it all worked out. I met your mom, I Brett Kavanaugh-ed her up some stairs and accidentally had Meg. But high school was a rough couple of years.

Peter: I never told anyone that story. I just wanted to save you from some of the pain and humiliation I went through. You and I are a lot alike.

Chris: You think so?

During the confirmation hearings, Democrats and the media hyped preposterous and uncredible allegations of sexual assault made by Christine Blasey Ford and others against Kavanaugh. The media's behavior during those hearings was another despicable example of media gaslighting.

But leftists never give up. Once they smear a target with Alinsky-like tactics, whether Brett Kavanaugh or Clarence Thomas, they perpetuate the lie forever.

Family Guy creator Seth MacFarlane is a reliable leftist on nearly all issues, with the exception of trans madness, so his show naturally goes along with the left-wing psyops.

Television routinely canonizes Democratic SCOTUS nominees and vilifies or erases Republican ones. This week's episode of Family Guy was no exception to that rule.