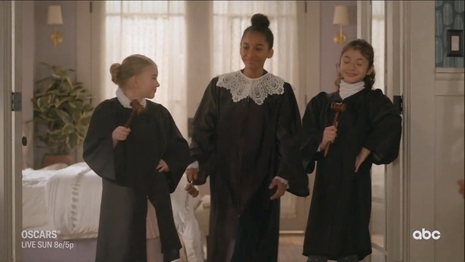 The ABC sitcom Home Economics celebrated women on the Supreme Court this week with a musical number. Well, not every woman. The name Amy Coney Barrett was noticeably absent.

In the episode 'Workout Leggings, $29' on Wednesday, siblings Tom and Sarah Hayworth (Topher Grace and Caitlin McGee) are writing a musical for a prestigious private California elementary school where Sarah is a counselor.

The musical is titled "Unsung Sheroes: A Celebration of Groundbreaking Women from Sacagawea to Sotomayor." At the end of the episode, Tom and Sarah preview for their relatives a song they wrote about women on the Supreme Court.

Luckily, there are three elementary school girls among the many Hayworth cousins to perform the song as Supreme Court justices. That would normally be a perfect number because there are currently three female justices on the U.S. Supreme Court -- Elena Kagan, Sonya Sotomayor and Amy Coney Barrett. But that is not how the scene plays out.

Shamiah: ♪ You can't hurry law ♪ ♪ No, you must have debate ♪ ♪ She said law don't come easy ♪ ♪ Sometimes you kick it back to states ♪

Camila: ♪ But how many verdicts must we stand?

Marina: ♪ - Aw, this is amazing. You two make a really good team.

Sarah: Yeah, we do. We're never doing it again.

Gretchen: ♪ Just hangin' on ♪ ♪ It's women's rights. No, they can't be gone. ♪

Two women who rose to the role of U.S. Supreme Court Justice -- Amy Coney Barrett and Sandra Day O'Connor -- go completely unmentioned in the introduction. Both were nominated by Republican presidents. Considering that the song is introduced with, "Straight from the Capitol" wouldn't announcing Amy Coney Barrett make more sense than the "notorious RBG"? After all, Ginsburg has been dead since 2020. Is her ghost arriving from the Capitol?

For radically left Hollywood, only left-wing Democratic women exist or matter in history. The accomplishments of conservative or Republican women are simply erased.

Then again, in today's climate one wonders why the writers even let Tom and Sarah presume what a woman is. To paraphrase current Supreme Court nominee Ketanji Brown Jackson, they aren't biologists!