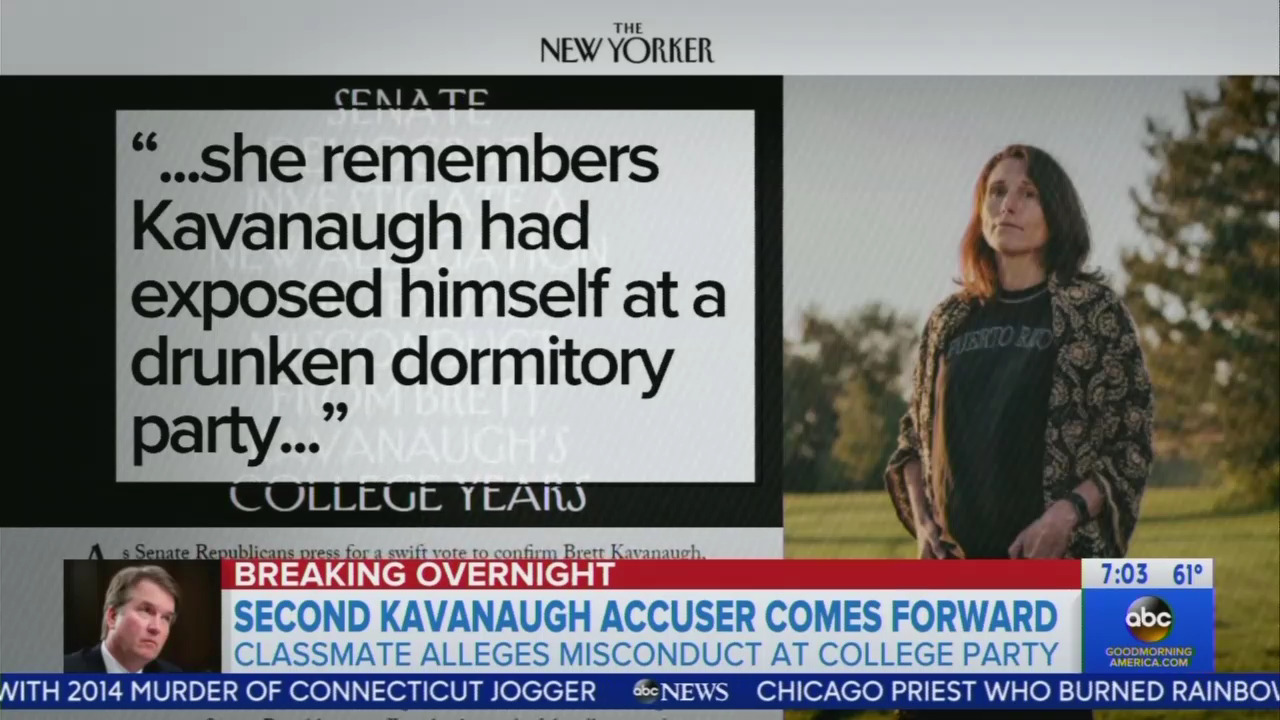 But only a tiny percentage of that coverage — a measly eight percent — has been devoted to Kavanaugh’s denials and the lack of corroboration for his accusers’ accounts.

MRC analysts pored over all of the coverage from September 13 through September 24. Most of the airtime (305 minutes) was spent on the allegations made by Christine Blasey Ford, which were the only known charges for most of this period. The charges leveled by Deborah Ramirez drew 37 minutes during the September 24 morning and evening news shows; an additional two minutes of airtime was spent on an unknown third accuser teased by Democratic lawyer Michael Avenatti.

Amid that sea of coverage, our analysts found the networks devoted a minuscule fraction on the key points that support the Supreme Court nominee’s case:

■ Kavanaugh’s denials. Back on September 14, Kavanaugh issued a statement “categorically and unequivocally” denying Ford’s charges. For most of the coverage that followed, his flat denial was relegated to a few seconds in lengthy stories about the charges — sometimes no more than a parenthetical clause that reporters mechanically inserted in stories that bombarded viewers with the salacious details of each accusation.

On September 24, however, the three evening newscasts ran a combined three minutes showing clips of Kavanaugh’s interview on Fox News, in which he stated his denials on camera for the first time. That night’s coverage boosted the total airtime spent telling viewers about Kavanaugh’s denial to 14 minutes, barely four percent of the overall coverage.

■ Ford’s lack of confirming witnesses. Almost as soon as Ford told her story to the Washington Post, Kavanaugh and fellow Georgetown Prep student Mark Judge (named by Ford as in the room at the time of the alleged assault) flatly denied that they’d ever been to a party matching her description. Over the next several days, two other individuals named as present at the event — Patrick Smyth and Leland Ingham Keyser — also said they could not corroborate Ford’s account, even though Keyser announced that she believed her friend Ford’s story anyhow.

Important as these statements were, the networks didn’t seem to care. Judge’s denials of Ford’s account drew a mere 162 seconds of attention from the networks (49 seconds on ABC, 43 seconds on CBS and 61 seconds on NBC). Smyth was only mentioned by name once, on CBS This Morning, for a grand total of eight seconds. Keyser’s statement was mentioned on ABC and NBC for a total of 26 seconds. Collective references to these statements, or general statements that Ford lacked any supporting eyewitnesses, garnered an additional 94 seconds of airtime.

Add it all up, and the three broadcast morning and evening news shows spent less than five minutes on this crucial evidentiary point, or less than two percent of all coverage of Ford’s charges. This statistic should embarrass any network which claims to be devoted to fair news coverage.

■ Character witnesses. The broadcast networks also buried the fact that dozens of women who actually knew Kavanaugh were publicly vouching for his good character, including women who knew him in high school and others who worked with him in a professional capacity. CBS spent just 65 seconds of airtime acknowledging these supporters, but that was more than ABC (22 seconds) and NBC (35 seconds) combined.

Ex-girlfriend Maura Fitzgerald stated at a September 21 press conference: “In both public and private, Brett treated me and everyone I know with respect. He has always been kind and good natured.” But that press conference, which featured 75 women, merited just 21 seconds on the CBS Evening News, and 14 seconds on the NBC Nightly News. ABC’s World News Tonight completely skipped it.

■ Ford’s politics. On September 17, National Public Radio — hardly a right-wing outlet — passed along how Ford’s lawyer, Lisa Banks, said the accuser “was not motivated by politics,” but NPR added crucial context to that statement: “Ford is a registered Democrat who has made small political contributions to Democratic organizations. In April 2017, she attended a March For Science in San Francisco, which was held to protest Trump administration cuts to research, and she signed a letter in June 2018 condemning the Trump administration’s policy, since abandoned, of separating immigrant children from their parents at the border.”

None of these facts made it onto the broadcast networks. Only NBC bothered to mention this topic, when on September 17 Today co-host Savannah Guthrie invited Ford’s attorney, Debra Katz, to knock down the idea that partisanship was a factor: “According to the Washington Post, she’s a Democrat. A lot of people look at this and say here’s somebody who has a political motive to tell this story. What would you say to that?”

That amounted to just 12 seconds of airtime, which was still better than ABC and CBS, which never spent a second telling viewers about Ford’s liberal activism. You can be sure that if a liberal Supreme Court nominee was being accused by a woman with an equally conservative background, the networks would make sure viewers were aware of that background.

■ The Ramirez allegation. Compared to the Ford allegations, the networks were more skeptical of those that broke Sunday night in The New Yorker — but only slightly. Roughly 16 percent of the coverage focused on crucial questions about Deborah Ramirez’s story that Kavanaugh mistreated her at a college party in the early 1980s. Out of 37 minutes of coverage, the networks devoted 131 seconds to Ramirez’s admitted memory “gaps;” 126 seconds to the statements of Kavanaugh’s college friends disputing her account; 58 seconds to the admission that there are no eyewitnesses who can verify her account; and 49 seconds on how other news organizations, such as the New York Times, had attempted and failed to corroborate the story themselves.

Both Kavanaugh and Ford will get equal time to tell their side of the story at Thursday’s hearing. That’s a much fairer forum for Kavanaugh than he’s received from the broadcast networks during the past two weeks.