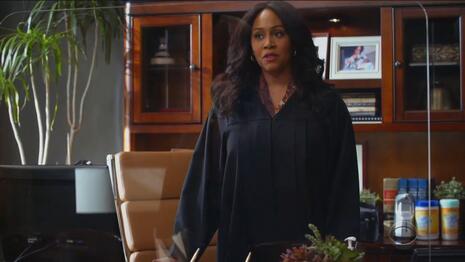 There are no good cops and cops do not protect black people. Such was the message of this week's episode of CBS's All Rise.

In the episode, 'Hear My Voice,' on May 10, a corrupt sheriff is on trial for obstruction of justice. He covered up for an inexperienced officer who shot and paralyzed an unarmed innocent man. The sheriff, Wayne McCarthy (Louis Herthum), is shown to have systematically covered up for overly-aggressive or incompetent cops throughout his career.

Judge Lola Carmichael (Simone Missick), who has been openly sympathetic to Black Lives Matter in previous episodes, gets in an argument in her chambers with the sheriff's defense attorney, Corrine Cuthbert (Anne Heche).

Judge Carmichael: Nor should you, but this is about your blatant disrespect for me and the witness.

Atty. Cuthbert: Fine, what about your blatant disrespect for me and the officers I defend, the good ones?

Judge Carmichael: Ms. Cuthbert, I doubt we would be in one of the largest civil rights movements in history if there were an abundance of these "Good ones" you speak of.

Atty. Cuthbert: You don't understand the toll it takes. I have seen too many marriages and livers destroyed to serve and protect us.

Judge Carmichael: Define "Us." Because the "Us" I know is not being protected.

Judge Carmichael: A corrupt judge does not murder and then hide behind their union.

Since Black Lives Matter and other radical leftists began vilifying cops, police officers from New York to Los Angeles have been targeted for assassination, sometimes in ambush-style killings. BLM has contributed to an increase in cop killings for years now. That "civil rights movement" Judge Carmichael speaks of has also been responsible for one of the sharpest yearly rises in homicides ever recorded in U.S. history.

The show does not portray Sheriff McCarthy as one bad apple, but as part of a larger culture of nefariousness. When sentencing him, Judge Carmichael speaks of the sheriff "perpetuating a cycle of corrupt police culture."

To further add to its woke points, this episode also threw in a subplot where a bleeding heart defense attorney helps her boyfriend reunite a child from an ICE facility with her illegal immigrant mother. No mention is made of traffickers who abuse illegals crossing a porous border or the drug cartels that take advantage of left-wing immigration policies.

Rather than watch an episode of All Rise, it would be easier to sit through a lecture by an obnoxious blue-haired Marxist professor. The experience would feel less insufferable.

This rant was brought to viewers in part by Zyrtec, Cheez-It, and Advil. You can fight back by letting these advertisers know what you think of them sponsoring such content.