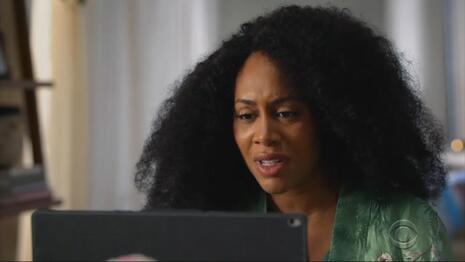 CBS's woke court drama All Rise has spent all season pushing BLM propaganda. One lie that Black Lives Matter promotes is the myth that America's first police departments were created to capture fugitive slaves. The leader of Black Lives Matter of Greater New York even said on Fox News that the first police departments were used as "slave patrols." One way that leftism attempts to destroy American institutions is by lying about their founding.

BLM's claim is demonstrably false. The first pre-Civil War police departments were created in Boston, New York and Philadelphia and their creation had nothing to do with capturing runaway slaves. But facts never stopped Hollywood from promoting BLM myths.

All Rise's season premiere in November opened with an episode in which an unarmed black teenage protester was wrongfully held at gunpoint by a white police officer. She was then saved by lead character Judge Lola Carmichael (Simone Missick).

In this week's episode, 'Almost the Meteor,' on January 25, Lola chats over zoom with the teenager she saved, Dionn (Shannyn Covington). During their call, Dionn repeats the fugitive slave lie and Lola praises her.

Dionn: Thank you for saving me.

Dionn: You know, you're kind of a badass.

Lola: You're one to talk. What happened?

Dionn: By the time I was released, you were gone. I kept asking, am I free to go? And when they said yes, I ran, didn't realize I had left my bag.

Lola: So...why were you out protesting?

Dionn: Oh, just to bring attention to an oppressive institution with roots in fugitive slave capture.

Lola: Wow. You are a smart young lady. There are plenty of folks who share that critique but ignore the call.

Dionn: Well, I figure no one else is gonna fix it for me.

It is not "smart" to repeat a false narrative without doing the historical research, especially one that can be so easily disproven. Is it really so hard to accept that law enforcement grew out of the natural need for protection in cities? While its role was indeed abused in slave-holding states, that does not give Hollywood the right to smear the roots of the entire institution.

It is, in fact, the inability of law enforcement to do its job since the rise of BLM that has proven to be truly oppressive for some black communities as they witness shocking rises in crime, especially homicide, making their neighborhoods unlivable. Sadly, it is that very real and tragic narrative that you will never hear about on shows like All Rise.